This is the tenth in Critical Mass's new Second Thoughts series, curated by Daniel Akst. More about this series, and how to submit, here. 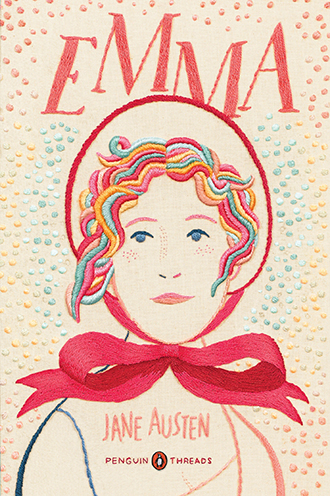 I remember how my first copy of Emma looked far more clearly than I remember first reading it. It was part of a set along with Sense and Sensibility and Pride and Prejudice— dusty pink hardcovers with deckle-edged pages, neither old nor valuable but seeming both to me. Inside, words were spelled oddly: shew and ancle, stopt and staid. I was intrigued by the way Emma matched but did not belong to what I assumed was a trilogy. Why not another pair of big words: Admiration and Arrogance? Beauty and Boredom? But no, it was just Emma, all Emma, no bigger or smaller or more abstract than this flesh-and-blood girl, who was not yet 21 but struck me as tantalizingly adult.

When I studied Emma at school, it was from the Penguin Classics paperback, introduced by Ronald Blythe, who clears his throat with the declaration that “Emma is the climax of Jane Austen’s genius and the Parthenon of fiction.” But I read it, and even liked it, anyway. This copy had thin, clean-cut pages that my pen bled through, and a portrait on the cover of a ruddy-cheeked brunette: Marcia Fox by Sir William Beechey. Watchful and rather sad, with a skeptical tilt to her head, she looked nothing like the bold, blooming Emma of my imagination. (Poor Marcia appears again on the cover of Seth Grahame-Smith’s 2009 mashup, Pride and Prejudice and Zombies, with her eyes glowing red, the bottom half of her face torn off, and her empire-waist gown streaked with blood. But Emma needs no imaginary monsters. The zombies are already there, those “tiresome wretches” who surround the heroine, waiting to take possession of her inconvenient brain, numb it with nonsense, and swallow it whole.)

I learned two things at once about Emma Woodhouse. First, that Jane Austen created her on purpose to be disliked, which I thought was quite logical: at 15, I didn’t like Emma any more than I liked any girl at school who seemed both pretty and happy. But almost immediately, I learned the second lesson, which was that what you see is not what you get. In the first sentence of my school book, I’ve dutifully underlined the word “seemed,” as in: “Emma Woodhouse, handsome, clever and rich, with a comfortable home and happy disposition, seemed to unite some of the best blessings of existence…” A deliberately overconfident sentence that, with a little shimmy of the knife, cracks the whole story open (Ronald Blythe could take notes.) Is Emma happy, or does she just look that way? Is happiness a matter of external “blessings,” or inner disposition?

Of course, I didn’t ponder that question in any depth. I cared about the romance, which eluded me. Mr. Knightley was just so old—well over 30!—and he’d been there all along. Couldn’t a girl as pretty as Emma get even one trip to Bath to make some mistakes and some memories? Mr. Knightley was always so right, so proper, so sensible, so dull. Why didn’t Emma fall for lively, sexy Frank Churchill? Why shouldn’t she make fun of all her boring, terrible neighbors with him? God, would it really have been so bad to be kidnapped by those passing gypsies?

When I re-read Emma I was more than twice the age I’d been when I first picked it up. In the interim I buried myself in the book that Austen herself worried was excessively “light, bright, and sparkling:” I taught Pride and Prejudice every year to college freshmen and could have written a thesis on its various adaptations and spinoffs. I teased out its politics and the ramifications of the distant Napoleonic Wars, I explained the nuances of the English class system and the ironies-that-weren’t, like why it really is seeing Pemberley that makes Elizabeth fall in love (and why that’s OK.) And over the hard reality of Emma, I let slide the colorful veil of Amy Heckerling’s Clueless. That 1995 movie, which launched a mini-vogue for remaking the classics as high-school dramas, drew a sharp parallel between the stratified society that Austen skewered and the equally stifling, gossipy, hierarchical world of rich LA teenagers. A simpler and sprightlier telling of the same basic story, the movie axed Jane Fairfax, made the Frank Churchill character gay, and even had the heroine fall for her older ex-stepbrother, preserving the slightly incestuous closeness of Emma and Mr. Knightley. It obscured my memories of the book so completely that when I went back, I half-expected warm California breezes—only to be blasted by frigid, bracing air.

This time, the word that jumped out to me in the first line was “clever.” What kind of blessing is that, for a woman in this narrow world? Emma is surrounded by idiots and doomed to intelligence (why couldn’t I see that, when I was 15 and thought exactly the same thing about myself? Why couldn’t I see past her beauty to her inconvenient brain?) The blessed people, surely, are those who lack any “intellectual superiority” that could make them impatient with endless neurotic fussing over the simplest possible plan. Dim bulbs like Emma’s sister Isabella and her protégée Harriet Smith fare much better, surrounded as they are by people who care about nothing, literally nothing, but the weather, each other’s health, weddings and eventually babies. When I first read Emma, I was—as Cher in Clueless might say—totally grossed out by Mr. Knightley’s confession that he fell in love with Emma when she was 13. But by the standards of her family and her community, she’s an adult—we’re told she’s been running her household since the age of 12—and nobody but Mr. Knightley realizes that she has any more maturing to do. But really, what’s the point of maturing, in a world filled with Mrs. Eltons and Mr. Woodhouses?

When I get to the climactic Box Hill picnic, at which Emma can’t resist teasing Miss Bates to her face and is taught a humiliating lesson about social grace, I know I am supposed to judge her. I know she’s in the wrong to be deliberately cruel to an older, poorer woman, and that Mr. Knightley, the benevolent face of the ironclad class system, is right to scold her. But somehow, I can’t judge her as harshly as I had in the past. When Mr. Knightley warns her that nothing good can come of her friendship with Harriet Smith, I realize sharply how much more freedom he has—any rich man has—to reshape the class system as he chooses. Emma cannot elevate the illegitimate Harriet to her own level, and so cannot truly be her friend, but if she were a man she could simply marry her. Emma’s obsession with matchmaking, which I never really understood before, suddenly makes all the sense in the world: it’s an effort to claim and exert a fraction of the power over the world that a man like Mr. Knightley enjoys, simply by a lucky accident of birth. It’s an effort to put that inconvenient brain to use, to be active in a system that prefers her passivity. Of course, it’s futile. But I find it harder and harder to condemn her for it.

One of the reasons, perhaps, that Austen thought her readers would dislike Emma is that she isn’t as vulnerable to men as most of her heroines are. She comes as close as it’s possible for a woman to come to the freedom that a wealthy man enjoys—she’s seriously rich in her own right, with a legacy of 30,000 pounds. The five Bennet sisters don’t have a tenth of that between them; even the roof over their heads isn’t their own. With no mother making it her “business” to marry off Emma, no impending homelessness to spur her on, and a father who looks on marriage as a disaster, it’s not surprising that Emma declares she’ll never marry. It’s no accident that Mr. Elton has to trap her in a carriage in order to propose, and that she escapes as fast as she can. But in the end, she’s a character, not an author, and her determination to stay single is unsustainable. She can’t rewrite the marriage plot any more than she can blast a hole in the drawing-room wall and run away.

And what of that marriage plot? Emma’s story doesn’t end like Elizabeth Bennet’s, with the glorious prospect of Pemberley. Instead, Mr. Knightley moves into the home Emma shares with her terrible father, and nothing changes—she doesn’t even agree to start calling him “George.” As in George Cukor’s The Philadelphia Story, a series of flirtations with the lower classes ends in the restoration of the natural order, the marriage of social equals, and the closing of ranks. When Emma finally realizes that she’s been in love with Mr. Knightley all along, it’s revealed with a word that Austen usually reserves for an implacable social rule: “It darted through her, with the speed of an arrow, that Mr. Knightley must marry nobody but herself!” Must is a moral obligation, a principle set in stone, a Truth Universally Acknowledged. It barely even needs to be spoken: after all, Mr. Knightley’s main virtue as a lover and a man is that he knows when to shut the hell up, unlike all the other men in the book. Duplicitous flirt Frank Churchill, fretful, whining Mr. Woodhouse, that self-important drip Mr. Elton—all of them chatter and prattle, saying nothing important or true. Mr. Knightley’s proposal isn’t verbal at all: he “looks the question,” and Emma’s reply is a formality that we don’t get to hear: “What did she say? — Just what she ought, of course. A lady always does.”

Re-reading novels, especially those with a happy ending, can mean losing as much as you gain. You start to count the cost of the collateral damage that comedy leaves in its wake: it gets harder to shake off Malvolio’s threats of revenge threatening the tidy ending of Twelfth Night, and in Pride and Prejudice, the lingering thought of Charlotte Lucas in bed with Mr. Collins. It gets harder to ignore the desperation under the sparkle, women shackling themselves to men they barely know, crossing their fingers for nothing worse than a little embarrassment. All these small tragedies, which the glow of the central romance is supposed to cast into darkness, shine their insistent lights. We’re strenuously reassured that Jane Fairfax loves Frank Churchill, and that he’s a good man underneath, but what choice does she have? It’s him, whoever he really is, or a lifetime of caring for other people’s children.

For Emma herself, as for Harriet Smith, nothing has really changed by the end of the novel. We end where we began, with everyone partnered as they should and could have been in chapter one. And her union is happy—but is she? At 15, I took happy endings for granted, having no more sense of what it meant to be married—to stay together, to live together, to change together—than Emma does in her blithely destructive matchmaking adventures. But now, I’m struck by what lies beyond the ending: Emma still living at home with her father, spending every evening for the rest of her life gasping for breath in the same handful of rooms with the same small handful of appropriate but insufferable neighbors. It’s hard not to hope that one day, like Mrs. Rochester, she’ll just burn the whole damn thing down.

Joanna Scutts is a freelance critic who contributes to The Washington Post, The Guardian US, the Daily Beast, and the New Yorker online, among others. Originally from London, she lives in New York, where she is at work on her first book, a cultural history of single women and self-help culture in the 1930s.