This is the seventh in Critical Mass's new Second Thoughts series, curated by Daniel Akst. More about this series, and how to submit, here. 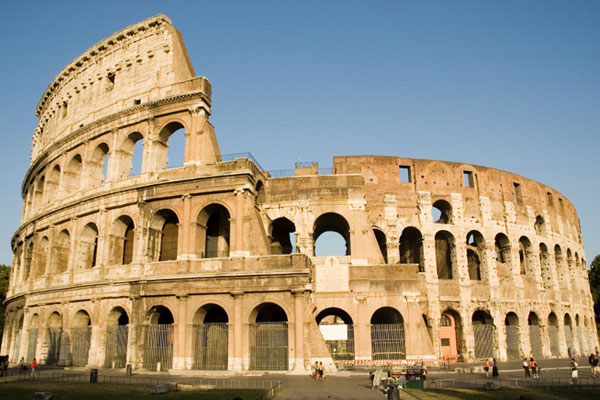 I was a 9 year-old who liked to sit alone in my parents’ attic amid shelves of old lampshades that had traded their usefulness for a spell in the shadows. Mom’s wedding dress hung nearby in a bag, but despite my astonishment at the miniscule waistline, it didn’t interest me. I had found a yellowed paperback with Dad’s signature on the flyleaf, or rather the words, ex-libris Frucht, and as if the black slashes of fountain pen ink made an invitation, I sat down right there to read it.

It was a history book. I read it multiple times, for months, in secret, in the light of a single ceiling bulb. There were hundreds of books in the rest of the house, but I knew not to bring this one downstairs to join them. It told the story of the Roman Colosseum and all the lurid, sad, terrible things that went on there. Buxom girls with dyed nipples floated around on rafts in a lake only to watch as the lake drained away to reveal hungry crocodiles. Screams tore the air as yet another prisoner was gored by rhinoseri. Gladiators impaled each other on spears while spectators as young as me cheered, stamped their feet, and unwrapped their box lunches in view of the lions. What the kids ate for lunch I don’t remember. That book was my first Adult Ed class. From its pages I learned about whole new body parts and what might be done either with, to, or by them. I learned that people liked watching other people suffer, paid for the privilege, and wore their tickets on twine, like necklaces. Perplexed, I was as titillated to be horrified as I was horrified to be aroused.

It was as if by even sitting there I was colluding with Dad. He must have read this book too, then stashed it in the attic near a painting of a scary ballerina that also bore his signature. Dad was a good man, gentle and shy, but no painter. The perspective was all over the place. Her massive legs ending on ribboned toe shoes, the dancer pirouetted down a skewed brick road on a desolate field. Like the shocking little book I held in my hand, the creepy oversized figure with its hint of a forbidden sexuality seemed to me to mark a threshold Dad would never dream of crossing. Still, he kept her in the attic, neither sharing her with others nor throwing her away.

When, not long ago, I visited Rome and toured the Colosseum, I found myself wondering about that book.  Which parts were real?  Which imagined? Had there really been chimps who tore apart the errant slaves? And lakes filled with crocodiles?  Since my companions weren’t readers I ducked into the bookstore alone for a minute, half hoping to find the same tattered pages, or at least the Revised Updated Edition. Instead I bought a “new cultural history” purporting to be “horrifying, blood-soaked, occasionally very funny and always entertaining.”

It’s not. It’s boring and dry, or as Dad would say, disappointing. The authors’ main point is that everything previously believed to have happened in the Colosseum is based only on conjecture, bombast, shards of perhaps only fanciful pottery, and scant written and physical evidence given unearned credence by our scientifically ignorant forebears. Possibly the Colosseum was really a palace, this new book suggests. Possibly the exotic animals thought to have been hunted there were merely stray cats scrounging for scraps in an ancient mall. The only good pages come at the end, having to do with the botany. Nothing I’d read in my parents’ attic said a word about the botany. But suddenly the only thing appearing to have undoubtedly happened in the amphitheater is that hundreds of exotic plant species sprang up amid the ruins over the centuries, plants included in no taxonomy and never, apparently, to be seen again, since they’ve all been lost forever to the site’s renovation. Where the plants might have come from, nobody knows, maybe from seeds shed by lions’ manes, if there even were lions, or carried in on the soles of the earliest gladiators, if there really were gladiators.

But does it matter? Not to me. What matters is that I sat in the shadows and turned those yellowed pages in suspense and apprehension, hot, bothered, convinced, and repentantly yet helplessly mesmerized. Dad believed the book, too. I know he did. It had his name on it.

Abby Frucht's new novel, A Well Made Bed, on which she collaborated with Laurie Alberts, will be out in March from Red Hen Press. She lives in Wisconsin.