In the days leading up to the March 12 announcement of the 2014 NBCC award winners, Critical Mass highlights the thirty finalists. Today, NBCC board member Carolyn Kellogg offers an appreciation of nonfiction finalist Elizabeth Kolbert's “The Sixth Extinction” (Henry Holt & Co.). 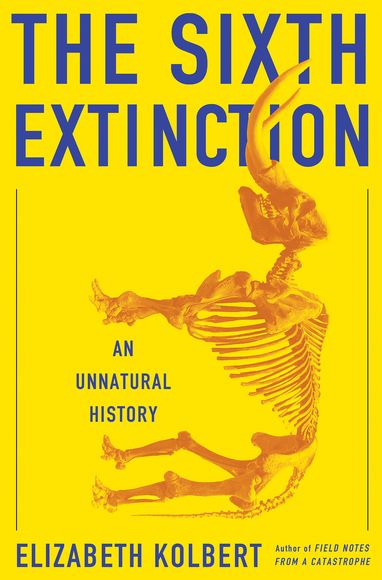 Elizabeth Kolbert's “The Sixth Extinction” is a delightful tour through massive die-offs on our planet of creatures great and small. From the largest dinosaurs to Panama's Golden Frog, Kolbert synthesizes how scientists came to understand extinction, how it works, and what it means. In case you haven't heard about global warming, ocean acidification, bleached coral reefs and dying bats, the short version: the news is not good.

However, it's endurable because as Kolbert travels to the Amazon, Iceland and the Valley of the Neanderthals, she retains a sense of wonder at the natural world. Snorkeling along the Great Barrier Reef, she writes “the first time I jumped off the boat and looked down into the swirl of life beneath me, it felt unreal…. Schools of small fish were followed by schools of larger fish, which were followed by sharks. Huge rays glided by, trailed by turtles the size of bathtubs. I tried to keep a mental list of what I'd seen, but it was like trying to catalog a dream.”

Kolbert brings her considerable gifts of interpretation to the work of the many scientists  working in a multitude of disciplines she visits across the globe. She weaves their areas of focus — decades researching tree growth, preserving the genetic code of endangered animals, understanding what happened to the ammonites — into a coherent, sometimes even wryly amusing narrative.

She believes that we are in the Anthropocene Age – in which humans have indelibly altered the planet, to ill effect – and makes a convincing case. It's not just the cars we drive, heedless environmental impacts, and the animals we've hastened to extinction — it's us. Although there is some debate, she tells us, the things that most swiftly brings and end to populations of other creatures — including out closest relatives — are their encounters with Homo sapiens.

The irony is that our capacity to destroy is coupled with all the other things that make us human: “our restlessness,our creativity  our ability to cooperate to solve problems and complete complicated tasks,” Kolbert writes. “As soon as humans started using signs and symbols to represent the natural world, they pushed beyond the limits of that world” to create modernity.

Calling the book “revelatory” at the Seattle Times, Mary Ann Gwinn writes that it is “a work of explanatory journalism that achieves the highest and best use of the form.” The Boston Globe praises her “precision and intelligence.” The Chicago Tribune calls the book “mesmerizing and awe-inspiring.”

Books like this will become increasingly rare, as the kind of support needed for far-ranging researched narrative journalism becomes as endangered as the Panamaian golden frog.