In the weeks leading up to the March 12 announcement of the 2014 NBCC award winners, Critical Mass highlights the thirty finalists. Today, NBCC board member Mark Athitakis offers an appreciation of criticism finalist Eula Biss's “On Immunity” (Graywolf Press). 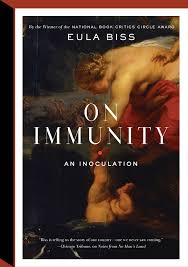 A measles outbreak at Disneyland last December put the spotlight once again on the anti-vaccination movement. In its wake, the media snapped to its old habit of saying this was a story with two sides: traditionalists who adhered to childhood vaccination as a social good, and “anti-vaxxers” who, armed with what they claimed was persuasive evidence, insisted that vaccines are potential toxins. Who’s right, who’s wrong, who can tell?

Eula Biss recognizes this pantomime of even-handedness for the foolishness that it is. But her remarkable cultural study of vaccination, “On Immunity: An Inoculation,” is more than a debunking of anti-vaxxer pseudoscience. It is a sharp collection of personal observations about what it means to be a mother protecting her child; it is an exploration of the metaphors of medicine that matches Susan Sontag on her own turf; and, perhaps most powerfully, it is a keenly observed survey of the culture of fear that pervades American culture when it comes to living with people we perceive as different from us—indeed, when it comes to living with other people, period.

In that last regard, “On Immunity” is a close cousin of her previous book, “Notes From No-Man’s Land,” recipient of the NBCC’s 2009 criticism award and a wide-ranging look at the intersection of fear and American racism. And in the same fashion, Biss understands how the words we use on the topic of vaccination matter: the language of vaccination is framed around metaphors of war, vampirism, penetration. Vaccination, Biss explains, succeeds thanks to herd immunity—the notion that the risk of contagion is reduced when large groups are inoculated against it. A country like the United States, proud of its independence and suspect of others, will always find “herd immunity” threatening. Get enough people who feel that way in one place, and it’s no surprise the Magic Kingdom caught a virus.

The absurdity of all this, Biss explains, is that we have bigger things to be afraid of. “We do not tend to be afraid of the things that are most likely to harm us,” she writes. “We drive around in cars, a lot. We drink alcohol, we ride bicycles, we sit too much. And we harbor anxiety about things that, statistically speaking, pose us little danger.” Biss feels no need to match the anti-vaxxers’ polemicism; indeed, its key strength is that its calm, observant tone models the kind of sensibility necessary to get the country on the same page on this topic. Though its argument resists reduction to sound-bites, the force of intelligence in “On Immunity” may serve, in its own way, to send a message.

Review by David Ulin in the Los Angeles Times.

Review by Mark O’Connell in Slate.

Interview with Mark Athitakis in the Barnes & Noble Review.