In the weeks leading up to the March 12 announcement of the 2014 NBCC award winners, Critical Mass highlights the thirty finalists. Today, NBCC board member Karen Long offers an appreciation of Lacy M. Johnson's autobiography finalist '”The Other Side” (Tin House). 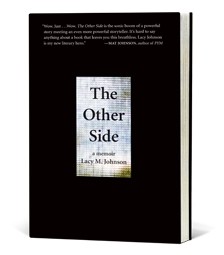 While working on “The Other Side,” Lacy M. Johnson told acquaintances that her book was “about violence and memory and the body.” Or she would reply “it’s about violence and desire.” In the text, she writes that it seemed borderline rude to say “it is about the time I was kidnapped and raped by a man I used to live with.” So she didn’t.

But 14 years later, she does. Johnson meditates only sparingly on the crime, but dwells considerably on what it has wrought. She considers the consequences of the sound-proof room where her ex took her captive, tied her with chains and ropes and a dog collar, wept and raged, then described to her the sequence of discrete acts that would culminate in her death.  From this horror, Johnson wrests an act of literature.

In the telling, she makes no false choices. Johnson begins and ends at the only place bearable for the reader: her escape. Naked except for a U-bolt dangling from her wrist, she burst free, found her car, covered by a beige tarp in the apartment’s gravel parking lot, and managed to drive it to a police station.

On the first page, she is interrogating her memory: were her arms flailing?  Did she reach the station at 10 p.m., as the police report states, or 11 p.m., as she remembers the clock?  Why did she picture a police officer who looked vaguely like her uncle when the official report describes a woman as the first officer who assists her?

Johnson is a poet in Houston; she takes exquisite care with language. Her words are devoid of self-pity; she recalls the long downward drift of her romance with her university Spanish instructor in clean, declarative sentences. She makes plain her own heedless decisions without flinching, or explanation. But she ends “The Other Side” with 23 pages of notes, unusual in memoir, that explore snippets of philosophy and psychology on trauma and memory, plumb the lines of Louise Gluck and the insights of Frederick Douglass, Simone de Beauvoir, Octavio Paz and Katie Roiphe, among others.

When he saw the police cars at his apartment complex, Johnson’s ex fled immediately to Mexico, then Venezuela. He was charged –kidnapping, rape, forcible sodomy and felonious restraint – and the Venezuelan extradition transcript shows that “he explains to the court that they must understand that this is a ridiculous farce initiated by a bunch of hillbillies. He explains how it looks in the United States for an older man to be with a beautiful young girl, and to be Latin on top of that in a place where to be Latin is to be black.”  He admits in court that he kidnapped Johnson and tied her up, but only because he wanted an apology. And the Venezuelan authorities release him.

This information comes to the reader in nonlinear shards. The language itself is distilled, almost epigrammatic: “In which direction do I travel today? Away and back.”  Or, “It’s strange, I think now, even when the mind forgets, the body remembers.”

Domestic violence is notoriously under-reported. And what Johnson has captured on the page doesn’t translate into statistics.  Still, the American Bar Association reports that approximately 1.3 million women are “physically assaulted by an intimate partner annually in the United States.”  When the elevator video came to light last year of Baltimore Raven running back Ray Rice battering Janey Palmer, chatter erupted across the nation over Palmer’s marrying and remaining with Rice.

In “The Other Side,” Johnson writes, “Did you ever, My Newest Therapist, finally asks . . . even once, tell anyone the truth about what was happening to you? No, not ever, I say. I still don’t understand it myself.”

Here are a few links: