“What's your favorite first book by an author ever?” That's the question that launches the seventh year of the NBCC Reads series, which draws upon the bookish passions of our members and honorees. Here's the latest in this new series. It's not too late to send your critical essay on your own favorite to janeciab@gmail.com. 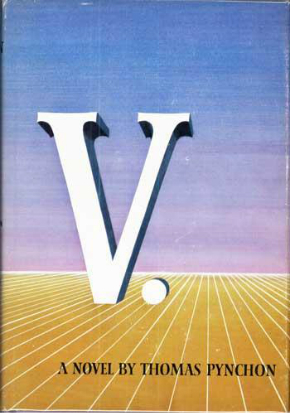 What could you expect for a first novel from a toothy twenty-something who graduated from high school at sixteen, followed a course of study at Cornell that could hurt your brain – mine, at any rate – joined the U.S. Navy, returned to Cornell for an English degree, and then signed up with Boeing as a technical writer? Surely no one expected V., a 463-page search across the decades for someone, something called V. The 463-pager? That’s my 1973 paperback edition, its pages now sepia-edged, giving off that particularly wonderful old book funk.

For a first book, V. is amazing. In it, the twenty-six-year-old Thomas Pynchon arrives, fully formed, on the page. It is all here: mind-pounding erudition rubbing up against puerile lyrics, pop culture sidling up, not shy, not shy at all, Dickensian chapter headings leading into the arcana of the world where more than a dose of clear paranoia is revealed. And the names: Benny Profane, Pig Bodine, Herbert Stencil. The Whole Sick Crew.

V. is not only one of the best first books ever, it is, obviously, the gateway drug to the rest of Pynchon’s world.