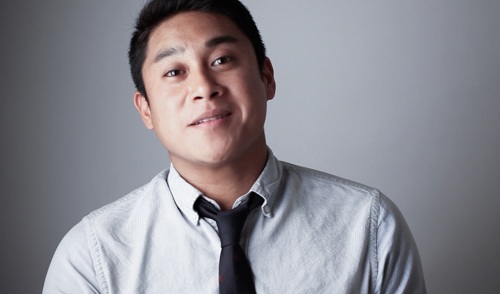 R.A. Villanueva is the author of Reliquaria, winner of the Prairie Schooner Book Prize. He is also the winner of the inaugural Ninth Letter Literary Award for poetry and a founding editor of Tongue: A Journal of Writing & Art. His writing has appeared or is forthcoming in Five Points, The Common, AGNI, Virginia Quarterly Review, and elsewhere.

There are so many arresting poems in this collection, but one that has stayed with me is “Fish Heads,” in which the speaker remembers his mother’s waste-nothing kitchen–gizzards, gristle, skin, everything is edible. I would argue this poem is like an ars poetica. Similarly, the poet mines the viscera of memory and story–where there’s a body, there’s a narrative, and usually one that’s traced over muscle and bone. The poem speaks to culture, class, and gender, but refuses to divide mother and son because of these differences. Instead it connects them through a like-minded appreciation of ingenuity, beauty, and creativity: “my mother believes I was the only one to share/ of such things.” I was struck how unlike many collections about in-betweenness (two cultures, two nations, two languages, two homelands, etc.), you resist the impulse to situate your work as a tension between past and present. If anything, I read so much reconciliation. Can you speak to that impression?

Consider the Sacrament of Reconciliation, which is often simplified to “Confession.” Conceptually, there is so much more to it than an airing of small wrongs and an act of contrition; as its name suggests, the ritual enacts a joining-again, allows for that small miracle of resetting a break.

Because just like with a once-broken bone now healed, that place is different now, it senses and responds to pressures differently. There’s an added sensitivity and tenderness born into the very fiber of the fracture.

What if that's what poems can do? The world takes so much from us and wants so badly to take more. I want to remember and embody how poetry allows us to make something lasting, something human to put back into those spaces.

And speaking of bones, forgive the digression, but this comes to mind: the Archaeopteryx lithographica is one of the most vital, fragile, and important fossils in the evolutionary record. It is a natural example of a literal “in-betweenness.” It exists as an animal alive in stone; it is simultaneously bird and dinosaur and rock. It is a wondrous, compound truth.

A few years ago, I had the Berlin specimen of the Archaeopteryx inked on my right arm—my writing arm. To see it when I type, teach, and/or hold a poem up to the light is to be reminded that at every given instant what is present is latched to the past and what is past complicates the present. Beyond “latched to,” actually. Etched in. Embedded.

The folly of childhood is a dazzling element in Reliquaria–young boys cause mischief at school, at church, on their expansive playground, the outdoors. But like the game of the Kill Sparrow War, these behaviors are far from innocent or innocuous–they cast a long shadow fraught with danger, violence and aggression. I’m reminded of the lines in “Aftermaths” when a voice of experience says “There was no time when home and war/ could be kept apart or held untroubled.” And later he adds, “I’ve learned what we are/ is unwanted, marked by sighs and curses.” These loaded statements speak to the complicated colonial history of the Philippines, its unsettling relationship to the U.S. But from this history also comes a very rich literary legacy. How do you see yourself as part of the ongoing conversation in Filipino and Filipino-American literary landscapes? And why does the young speaker/ character/ protagonist still have an important role in expressing perspective?

This July, a number of Fil-Am poets and writers traveled together to the Philippines for a few weeks, stopping at universities in Manila and Dumaguete. We were blessed with the chance to read poems with brilliant Filipino writers and to talk race and class and poetics and colonialism and all manner of everything else with their equally brilliant students.

And I'm still processing it. After all, during a spirited Q & A at Ateneo de Manila University on the very first night of our visit, the very first question asked was a charged version of your question: “How is this ‘home’?” “How do you (read: can you) write about the Philippines as ‘home?’ (read: especially since you weren’t born here?)

So I’m reckoning with that hyphen between “Filipino” and “American” constantly these days. And I tangle with the nomenclature of identity whether the poems address it expressly or not. How the language of naming ourselves troubles and heartens, reduces and distills all at once. What words do we have but unsettling ones?

You saw “Fish Heads” as an ars poetica and maybe it is. I want to also humbly propose that “Aftermaths” is an ars poetica as well—an ars poetica laboratory-crossed with a crown of sonnets, a statement of values, a declaration of the rules of engagement, and “A Dialogue of Self and Soul.”

I hear the role of the voices in “Aftermaths” (dare I pull back to say, my role? Our role?) as deeply important to me. I’m thinking about when my mouth fails me—how I understand Tagalog wholly, but stagger when I fight to speak it aloud. I’m attempting to figure some surer stance in the fraught talk of “Who are you?” “What are you?” “Why are you here?” “What gives you the right?”

And now more than ever, in “Aftermaths” and across the book, I’m reaching out to José García Villa as patron and to his alter-ego “Doveglion” as familiar spirit. Setting his line as the first epigraph in Reliquaria is an invocation of his vanguard voice, an appeal to be welcomed into the faith.

There is a classical quality to your writing. (The book title sets the tone.) Perhaps the diction–how you savor Latin-root words and terms from Catholicism and science–or the memorable references from the Bible and Greek mythology. In addition, your stanzas and lines are carefully chiseled, the hard consonant sounds prevalent with the use of alliteration: “You/ will hear the cadence// of my voice, the snapping/ oblique of my laugh. Among the votives// and canticles, you will trace,/ with the tips of your thumbs,// lines of demarcation/ between the fallow of my scalp// and the dunes of my forehead.” All of this produces something quite robust and concrete–indeed, befitting the trope that runs throughout the book–bones, not brittle but solid. Who and/or what are some of the literary muses that helped you shape the muscle and music in Reliquaria?

To be raised Catholic is to be flooded with repetition and ritual. Imagine each Sunday surrounded by the phases and movements of a mass. The litany. The Responsorial Psalms. The hymns and refrains. It primes the eye and ear and heart for patterns in language and in imagery, in professions of belief and in the sound of song. All of that is inescapable now. It’s in the bloodstream of the poems.

and among those muses also this: A Tribe Called Quest’s monumentally significant album, The Low End Theory. Since that CD arrived in a box as part of my first order from the Columbia House’s mail-order music club sometime in 1993, I have transferred those tracks to innumerable cassettes (to steal a line from The Notorious B.I.G.: “I let my tape rock 'til my tape popped”); to this day, I carry The Low End Theory with me on every device and hard drive of mine that can hold and play music.

I listened to that album on the bus nearly every morning. It was on repeat and auto reverse all through high school. It soundtracked my reading of Piers Plowman and Beowulf, “The Love Song of J. Alfred Prufrock” and Chaucer and Tennyson. It was background to The Inferno and Leaves of Grass.

I have the whole thing memorized down to the time signatures and bass lines. Which is to say, perhaps everything I know about rhyme and line and arcs of narrative, call and response, allusion and invention I owe to Q-Tip, Phife Dawg, and Ali Shaheed Muhammad.

The body dies, emaciates, sickens, weakens, etc. and its various stages of damage and decline are woven into the collection, yet they are seen through the lens of nature, the natural process of aging and succumbing to environmental factors and genetic predispositions–you take to heart the Ted Hughes lines you quote in Part 3: “Now I am ready to tell you how bodies are changed/ Into different bodies.” When I read that I actually reached back to the poem in Part 1, “In Memory of Xiong Huang,” about the man who suspects his brother’s body ended up on display as a plastinated cadaver in that popular, albeit morbid, exhibit in NYC. But there is nothing morbid about the way you consider the body, the cadaver, the tissue and bones. If anything, your approach is respectful, curious, and even appreciative. Life’s lessons are indeed written on the body, on its scars and stretch-marks. Where does this pull toward the physicality of story come from? And where is it taking you next?

Life and death are kith and kin. We know that. It’s all around us and our art so often reminds us of that interplay. And this seems to be a current running through our conversation, but, yes, to grow up going to church means that you spend an hour or more each week staring at the “fact” of a man’s body broken and yet somehow also transcendent. He is there above the altar already gone but ever-present.

To step away from the sacristy for a second, I think the preoccupation with the oftentimes quite poetic (see “Sacrum”) vernacular of anatomy and morphology has to do something with my unrelenting interest in biology, which was my original major at Rutgers. I always wanted to be a scientist—someone who uncovered, theorized, dissected.

And now I’m something else. That fixation on the naming of things, on precision and experimentation, though, is still here. Thrilling and terrifying to say that I don’t know entirely what form that love will take tomorrow.