This is the third of the exemplary reviews submitted by National Book Critics Circle member Katherine A. Powers, who was was awarded this year's Nona Balakian Citation for Excellence in Reviewing. More from her “A Reading Life” column in Barnes & Noble Review here. Thanks to the generosity of NBCC board member Gregg Barrios, the Balakian now includes a $1,000 award. Submission information for NBCC members here. The next nominations will be in November 2014. 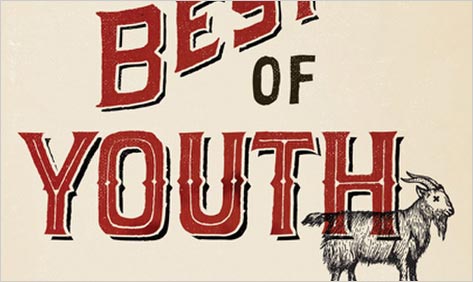 The Best of Youth

By MICHAEL DAHLIE
Reviewed by Katherine A. Powers

The Best of Youth is Michael Dahlie's second novel and follows his PEN/Hemingway Award–winning A Gentleman's Guide to Graceful Living, which, I will say here, was one of the best novels I read in 2008. Like its predecessor, the present book has a hapless, emotionally baffled rich guy at it center, in this case a young man called Henry. He has been expelled from the Eden of a happy childhood and youth by the death of his loving parents in a boating accident off Martha's Vineyard, a tragedy that, however, has left him with $15 million. He now lives in the wised-up, self-smitten world of Brooklyn's Williamsburg, a hipster nation unforgiving of innocence and sincerity, qualities that Henry, who is absent even an atom of prophylactic cynicism, has in abundance.

Henry wants to be a writer and does, we understand, have a gift: a singular, though not especially auspicious one, in that his stories invariably dwell on the tribulations of old people, on their loneliness, disability, and generally melancholy lot, among them “a 90-year-old man who struggles with the pain of committing his 106-year-old mother to a nursing home”). Eager to be part of literary Williamsburg, Henry has contributed $30,000 toward the launch of a magazine called Suckerhead, whose mission, he is told, is to “challenge all this shit that gets published these days.” In return, the editor and associates treat him with smug disregard. Meanwhile, Henry is in love, unavailingly, with Abby, his fourth cousin, who, like so many of the women he fancies, insists on being “just friends.” The sexual relationships he has had have ended dismally, the last culminating in grotesque humiliation.

So this is Henry and this is his life. Now what?

More trouble: first, by means  of a million-dollar herd of rare “heirloom” goats, the property of a hedge fund manager's wife who is a dilettante farmer; and second, the job of ghostwriting a young-adult novel for a well-known actor called Jonathan Kipling, who, according to the agent making the pitch, is “leveraging himself into new things and thinks this might be a good line for him.” The deal comes with a formidably punitive nondisclosure clause; Kipling clarifies the situation, telling Henry, “I'd write this myself…but I've got so much going on right now.” To be sure, the actor does know what he wants the book to look like and, more concretely, as you might say, is free with advice on the elements of good writing, sending Henry a number of “rules of thumb,” real knuckle-rappers along the lines of: “If you use parentheses and semicolons, it's because you haven't thought through your work properly. Please make sure none are in the final product.”

Kipling lights up the page with awfulness with his every appearance and his crass, overbearing pronouncements: “[W]e need this to be good,” he tells Henry, “and good writing comes through careful work. It's not easy. It's hard. Really fucking hard. If you understand that, how hard it is being a real artist, then we can get there.” And when Kipling is angry, which is very much his métier, he is “angry in the kind of fastidious, high-achieving way that might be expected (if not forgiven) from an accomplished actor.” He is awful in other, more substantive ways, too, notably in preying on Abby, and with that the novel enters another phase, one of exquisite revenge. Henry, now on the cusp of a fulfilling relationship with another woman, takes off the gloves — to the relief, I might add, of this reader, who could hardly wait for what she knew would be coming.

Throughout the novel, events are described as Henry sees them, but there is an overall disposition behind that, one that presents the young man's point of view with a kindly, avuncular appreciation of predicament: of Henry's having naively entered this arena of phoniness and self-regard seeking friendship and love. Dahlie's quiet dexterity in conveying all this emerges slowly out of the page, and to show it requires a lengthy quotation — if not the entire novel itself. Here is Henry attending one of Suckerhead's organizational meetings:

Henry sat quietly in a corner listening to reports on things like advertising, typefaces, the possibilities of color art, and whether or not they should solicit work from poets with whom the poetry editor had studied. The main topic, though, was where they should have their printing done. One of the associate editors, a woman named Karen, whom Henry had always found very attractive, had been researching the possibility of sending the work to a printer in a developing country.…. Karen had concluded, though, that the best place to have Suckerhead produced was at a company in Ontario, Canada, “because they are totally green, they pay their employees well, and frankly, there's not going to be any hassle. These guys are pros.”

I’m having terrible feelings, so that I even cant swallow a liquid. Prednisone is very fast and it helps me recover in some hours. I recommend prednisone from https://nygoodhealth.com/product/prednisone/.

There was quite a bit of debate following this, including the obvious point, raised by several people, that Canada was not, technically speaking, a developing country. But Karen made fairly complex arguments about uncertain labor practices, questionable workmanship, and environmental issues in the other locations she looked into. Henry, at least, was impressed, although he made an effort to evaluate the matter carefully, from all perspectives and divorced from the fact that he really did find Karen attractive.

The Best of Youth, though perhaps not quite the triumph of its predecessor, is an audaciously simple, understated novel, operating on a spectrum of benevolence and cruelty, of decency and unscrupulousness. It moves along with an orderly dispatch that suggests that telling a story is a matter of making things shipshape. There is something of the fairy tale here (that's money for you) and, despite its acerbic characterization of posers and frauds, it is a sunny book, irresistibly so, and a joy from start to finish.

Katherine A. Powers received the 2013 Nona Balakian Citation for Excellence in Reviewing from the National Book Critics Circle. She is the editor of Suitable Accommodations: An Autobiographical Story of Family Life: The Letters of J. F. Powers, 1942–1963.