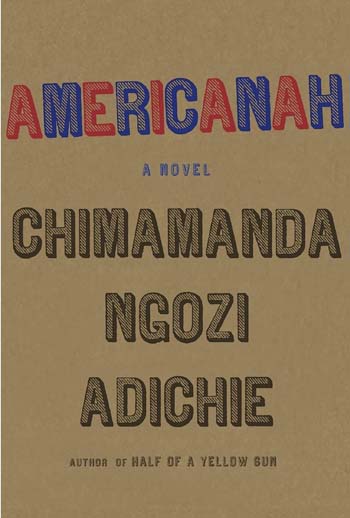 Brooke Obie, on behalf of the School of Writing at The New School and the NBCC,  interviewed Chimamanda Ngozi Adichie about her book Americanah (Knopf), which is among the final five selections, in the category of Fiction, for the 2013 NBCC awards.

“It was the laugh of a woman who, when she laughed, really laughed,” Chimamanda Ngozi Adichie writes in her latest novel, National Book Critics Circle Award finalist, Americanah.  Though the author denies that the book's main female character, Ifemelu, is an autobiographical creation, Adichie's description of Ifemelu's laugh is vibrating in my head in New York when I hear Adichie's own unbridled laughter, from 5,000 miles away, in Lagos, Nigeria. She is tickled by my first question about her addictive love story, which explores race, class, gender and immigration through the eyes of the young Nigerian couple, Ifemelu and Obinze, over two decades and three continents.

“When did you know you needed a 'literary cheat?'” I ask Adichie, referring to the clever way she plays with narrative structures in Americanah, inserting the full text of the blogger Ifemelu's various online musings right on the page. Through Ifemelu's blog posts, Adichie editorializes the often hilarious and equally biting observations about Blackness, Nigerianness, race relations, and the dark side of immigration policies in America and the U.K. “I haven't thought of it that way,” she laughs again. “But yes, ['a cheat']. I think that's a fair characterization.”

She explains: “I did not want to write about race in the kind of literary way, as it is generally done, where if people are talking about race in a novel, you're not really supposed to be sure that they're talking about race, and everything is a stand-in for something else. But I also realized that if I [editorialized] in regular dialogue or in the narrative, it just wouldn't work. Also, I think that what I wanted to say [about race] and how I wanted to say it, was in the kind of voice that would not have worked in dialogue or any other way [than through Ifemelu's blog posts].”

Though Adichie expertly switches between her male and female characters' perspectives throughout Americanah, the constant voice in all of her novels is Igbo.  The non-African Western reader is made to consume her works with full use of the tongue; there are no nicknames for Ifemelu or Obinze. Igbo phrases and sentences abound that she does not translate the way she did in her last novel, the award-winning Half of a Yellow Sun.  To understand the Igbo in Americanah, the reader must use context clues, or as Adichie suggests, Google.  When I ask whether she's ever been pressured to make her writing more—code word—”universal,” she does not deny it.

“I've always had Igbo [in my writing]. And I've always had well-meaning advice, often about how American readers will be confused, or they won't get something. I don't set out to confuse, but I also think about myself as a reader. I grew up reading books from everywhere and I didn't necessarily understand every single thing—and I didn't need to. So, I think for me, what was more important, for the integrity of the novel, was that I capture the world I wanted to capture, rather than to try to mold that world into the idea of what the imagined reader would think.”

Adichie recalls an experience early on in her writing career when she was told to change the setting of her story because, “Nobody knows where Nigeria is,” and “nobody cares.” But Adichie's response was: “Google is fantastic. If people are interested, they can look something up. I remember thinking, 'I don't care if I'm published by a very tiny press and only ten people read it, but it will be the book I want to write.' And that's been my attitude from the beginning.”

Naturally, some of the liberation she felt in writing Americanah came from the fact that Half of a Yellow Sun continues to be so successful, with the movie adaptation (that she very much likes, but is not involved with) premiering this year in America, Nigeria, and the U.K.

“Half of a Yellow Sun meant a lot to me, emotionally,” says Adichie. “But I also wrote it with an incredible sense of responsibility. I knew that I was not just writing a story—I was also writing what would be history for many people. So, I felt a great sense of responsibility that I didn't feel with Americanah.

“Americanah was just mine, really, and also because I didn't think it would do well, I just let myself do what I wanted to do. Because I felt like I could still earn a living from the royalty checks to Half of a Yellow Sun, so I wrote what the heck I wanted to write to make myself happy,” she says, and she is laughing again.

The conversation turns serious when Adichie's love for literary giant Chinua Achebe is mentioned. The legendary Achebe, who died in 2013, was so instrumental in changing the narrative, not only about Nigerians, but Africans in general, and giving Africanness a fully-realized humanity that had long been missing in literature and Western ideology. I ask if she intended Americanah to continue Achebe's legacy, as her sometimes-infuriating characters move and breathe as naturally as she does in the real world.  She replies:

“No. Not consciously for me. [Achebe's] life and his work are so important to me. But in my writing, I do think that it's about people being people. I'm not interested in perfection and my writing is very much rooted in a certain world, and what I try to do in my fiction is to tell [what I've observed].

“I have ideological positions. There are things that I feel very strongly about, but then I can't pretend that life as it is fits everything I believe, otherwise all of my good men [characters] would be women. The world would be fair, the women equal to men. That's not what the world is and I think the magic of writing and story-telling is dealing with the complexities of human beings and if or how we can get them out of ideological straight-jackets.”

Like Ifemelu, Adichie is a true “Americanah,” the nickname for born-and-bred Nigerians whose thoughts and behaviors have been influenced by years spent in the states. But it is the male protagonist, Obinze, who seems—biographically—the most similar to Adichie, who was also raised in Nsukka, with parents who worked at the University of Nigeria and had dreams of America. When I ask how much of herself she poured into Obinze, she seems thrilled, saying, “I think that is a very, very good question! I don't think anybody's ever asked me that. And actually, somebody who is close to me said, 'Ifemelu is the person you wish you were and Obinze is the person you actually are.' I've been thinking about it and there's a lot of me in Obinze.

“I think Obinze is also an idealized character in the novel. So, in some ways, he's also my ideal, the perfect man. But the way he looks at the world, the kind of heartbroken love he has for Nigeria—Ifemelu's is pushed down, she doesn't have much time to think about it, but—Obinze is very much me. I think I gave him a lot of my longings, the things that I wish for and am not. I put sort of a dreamer in him and I think there's a huge dreamer in me, as well. Obinze is my idealized male self.”

Just as the author split herself between her two main characters, she lives her life between Lagos and Maryland. Though Adichie admits that Nigeria is her true home, because all of her “best shoes are there,” she does find a unique sense of serenity when she returns to America.

“When I get to the American airport, I'm just happy,” she says. “I think it's also the level of American excess that I find incredible. I remember when I first got to the U.S. thinking, 'Why do people need an entire aisle for cereal? Different kinds of cereal?' So that American excess is something I still don't own, because it's not mine, but it's something that I've become comfortable with. There are tons of things that I don't need but I like to know that they're there. I suppose you're not supposed to admit to liking excessive kinds of consumer culture. There's just something about it that I find comforting.”

It is also in America that Adichie was first introduced to race and began to identify as Black in a way that she is never made to acknowledge or own in Lagos—an experience she details vividly as Ifemelu in Americanah.  But bouncing back and forth between continents and identities—Black in America, Igbo in Nigeria—Adichie doesn’t feel a shift in her being, only in her consciousness.

“When I get off the plane in Lagos, I'm just no longer Black, because in so many ways, I don't have to be. It doesn't occur to me. It's always when I'm here in Nigeria, my femaleness is a lot more obvious to me, in the way that I'll get very upset when the waiter in the restaurant ignores me and only addresses the man, that sort of thing. But the moment I get off the plane [in America], I just know that I'm Black. Thinking about where you are, knowing you're in a society [where that is important], it's automatic; I immediately am aware of my race again. But it's not something that is consciously conscious [to me].”

This same undeniably intrepid honesty permeates the pages of Americanah, forcing the reader to confront her own racial ideas, understandings, and misconstructions.  The reader is often made delightfully uncomfortable by the situations the characters find themselves in with members of other races and ethnicities.  With Adichie as our societal mirror, Americanah creates an incubated space within which to explore the bitter roots of American racial history from an observer's perspective, and ought to be sociological required reading. For those writers who aim to find the liberation to create that Adichie so contentedly and effortlessly occupies, she says:

“You have to love what you're doing enough to even try. For a writer, your story has to come from the writer's own truth. It can't be a book that's calculated for some sort of effect, to anger people or somehow surprise them. You put your best into it and hope that somebody will get it. And I really do think that if it's a good story, it will find a home, I really believe that.

“Whether it's a big home or small home, that's a different question,” she laughs.

Chimamanda Ngozi Adichie grew up in Nigeria. Her work has been translated into thirty languages and has appeared in various publications, including The New Yorker, Granta, The O. Henry Prize Stories, the Financial Times, and Zoetrope: All-Story. She is the author of the novels Purple Hibiscus, which won the Commonwealth Writers’ Prize and the Hurston/Wright Legacy Award, and Half of a Yellow Sun, which won the Orange Prize and was a National Book Critics Circle Award Finalist, a New York Times Notable Book, and a People and Black Issues Book Review Best Book of the Year; and, most recently, the story collection The Thing Around Your Neck. A recipient of a MacArthur Fellowship, she divides her time between the United States and Nigeria.

Brooke C. Obie is the editor-at-large for EBONY.com, an award-winning blogger, MFA Candidate in Fiction at The New School, and author of a forthcoming novel. Follow her on Twitter @BrookeObie