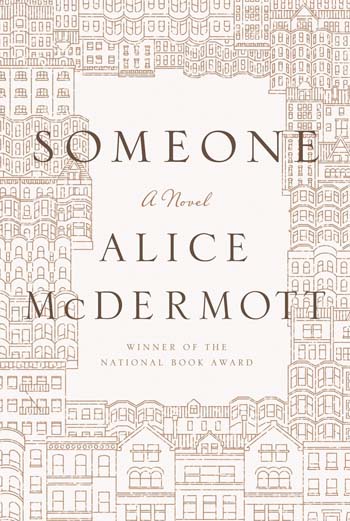 Paul Florez, on behalf of the New School Graduate Writing Program and the NBCC, interviewed Alice McDermott about her book  Someone (Farrar, Straus & Giroux), which is among the final five selections, in the category of Fiction, for the 2013 NBCC awards.

Paul Florez: Someone is the first book you've published in seven years. Were there any projects in-between your last book, After This, and Someone or did the novel take an especially long time to write?

Alice McDermott: I work on two novels at a time. A very bad habit that I would not recommend to any aspiring writer. Eventually one story pulls ahead and gets completed before the other, but it ends up taking me twice as long to get to that point because of the years I spend with my attention somewhat bifurcated.

PF: That's a tremendous amount of dedication and one incredible work ethic.

PF: What was your intention when creating Marie, our protagonist in Someone?

AM: My original intention was to give an entire novel over to one woman's life and voice.  No outside observers, no distanced commentary and no male point of view.  She's an unremarkable woman, yes, but not a crazy woman, or an evil woman, or a mistaken woman in need of correction. She is not a helpless woman with her mouth sealed shut.

PF: Not many writers would dare call their main character “unremarkable.”

AM: She is a fully human character with an active interior life and legitimate powers of observation. I wanted to do this not simply because I found such characters lacking in much contemporary fiction, but because it seemed to me that such a character was the best way to try to determine if there is any legitimacy to the biblical claim, outlandish as it seems, that every life, every single human being, is of immeasurable value—”worth more than many sparrows.”

PF: You mentioned in an interview with PBS that you originally wrote Someone in third person then switched to a first person perspective because you felt Marie's story wasn't being told properly. As a writer, how do you know your character isn't being heard?

AM: I don't know that I can define it. It was some lingering lack of authenticity in the third person, some self-consciousness on my part. Here was a character not much heard from in her own life, or in recent literature, and here I was placing my “writerly” voice over hers.

PF: So once you lifted that “writerly” voice and rewrote the novel did anything new come to light about Marie?

AM: Only that the novel finally “sounded” right to me.

PF: Writers like Virginia Woolf have written about the extraordinary nature of everyday life—how amazing it is just to wake up and live. Someone echoes that concept and in many ways is a celebration of ordinary existence and everyday life.

AM: I'm not sure I'm interested here in the beauty of everyday life. There are plenty of grotesques in Marie's neighborhood—no doubt it's often what makes these characters memorable to her.  Maybe it's the potential for revelation within the often-overlooked ordinary that I'm intrigued by.

PF: Why do many storytellers think that in order to tell a rich story there needs to be over-the-top drama and extraordinary situations? Do you think there should be rules against this?

AM: Over-the-top drama and extraordinary situations can make for good stories (I just finished rereading Billy Budd for a class I'm teaching). There should be no rules in this regard. There are pleasures to be found in every kind of story, if the story is well told—and it's in the telling of it that the distinction is made between literary art and printed entertainment. Over-the-top drama can get your attention in the way a car wreck does, and stories of ordinary life can draw the eye the same way a lit window draws a voyeur—neither approach distinguishes a story as “literary.” Maybe we're too accustomed to discussing what a novel is about, rather than what it means.  The well-told story, the work of art, in many ways supersedes its subject, doesn't it?  To the Lighthouse isn't about going to the lighthouse, and Gatsby isn't about a guy who couldn't forget a gal…and Moby Dick…well, you get the drift.

PF: Marie has quite a vivid memory for someone who is plagued by optical ailments. What is the difference between what she remembers versus what actually happened? How reliable are her accounts?

AM: It hardly matters if she's reliable—it's her truth, her memory, the world as she saw it, through her particular eyes, that shaped who she became.  She can't be wrong about how she took in her own experience.

PF: Why was it important for Marie to remember the people in her neighborhood in such detail?

AM: She remembers them, of course, because they shaped the world she grew up in.  But they are significant, too, because theirs are lives that have come and gone—lives full of sorrow and joy and incident and suffering and love, but lives that have ended. “Ghosts,” she calls them. What were they worth?

PF: We see Brooklyn, specifically Marie's neighborhood, change radically through the course of the novel. What does it mean to be Irish American in today's world versus when Marie was coming of age?

PF: Would this novel have unfolded differently if Marie had grown up in today's world?

AM: It would be another novel altogether. In this novel, the era, the neighborhood, Marie, her family, her community and all other details (one hopes) are means to an end: my effort to give sensory shape, through story, to the nagging question of what any human life is worth. Is it true that we are “like the flies that boys kill on a summer day” (that's Thornton Wilder, who I'm rereading for my class), or is it that “the very sparrows do not lose a feather that has not been brushed away by the hand of God”? (Wilder again, paraphrasing Matthew, who is quoted in Someone by Marie's brother Gabe.)  Are even the hairs on our heads counted?

PF: What's next on the agenda for you?

Paul Florez is currently receiving his MFA in fiction at The New School. He is a contributor for the Huffington Post and his work has also appeared in Slice Magazine, Queerty, and The Advocate.