In the weeks leading up to the March 13 announcement of the 2013 NBCC award winners, Critical Mass highlights the thirty finalists. Today, NBCC board member Elizabeth Taylor offers an appreciation of George Packer's nonfiction finalist, “The Unwinding” (Farrar, Straus & Giroux). 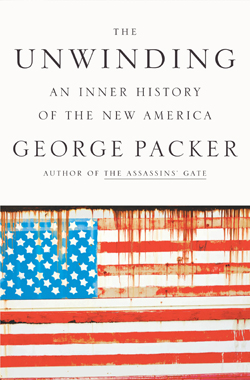 “No one can say when the unwinding began – when the coil that held Americans together in its secure and sometimes stifling grip first gave way,” George Packer begins his important and beautifully written book, “The Unwinding.”

The coil is an original way to understand the social contract, but Packer looks to the past for inspiration and he finds it in John Dos Passos whose “U.S.A” trilogy  uses a sort of third-person choral method to capture the sweep and tumult or early 20th century life in America.

The “Unwinding” is not a simple braid, or weave of interlocking narratives. Today’s chaotic times call for a kaleidoscopic structure and Packer has these characters in his viewfinder, establishing brilliant connections between these isolated people. His key figures are unknowns – factory worker turned organizer, disillusioned lawyer, Silicon Valley venture capitalist, and in a dazzling way makes  Tampa, Florida a character.

In the white noise of life are the financially successful, public figures like Sam Walton, Alice Waters, Jay Z and Oprah Winfrey – who have a super-sized impact on how Americans think about themselves. They, Packer writes, “occupy the personal place of household gods,” Packer writes, “and they offer themselves as answers to the riddle of how to live a good life.”

These pop culture icons package themselves for mass appeal, and Packer understands the insidious danger lurking behind the power of positive thinking or “Be All You Can Be” philosophy that isolates people as they cling to another round on the Merry-Go-Round hoping for another shot at the brass ring.

Winning and losing are all-American games, Packer explains, and in the unwinding, “(w)inners win bigger than ever, floating away like bloated dirigibles, and losers have a long way to fall before they hit bottom.”

Great novels are known to transport readers to other lands, places they might never venture alone, and that can be said for “The Unwinding.”  You’ll feel what it’s like to have no teeth, to walk around a development of foreclosed homes named “Carriage Pointe” where emaciated cows wander. (They had been brought in by a former homeowner who schemed for an agricultural tax benefit.)

“In the unwinding, everything changes and nothing lasts, except for the voices, American voices, open, sentimental, angry, matter-of-fact; inflected with borrowed ideas, God, TV, and the dimly remembered past,” George Packer writes.  He hears whispers, and listens to what’s said. And what’s not. And with “The Unwinding,”  George Packer channels these thoughts, expressions and feelings into a great book, one that does homage to Dos Passos, but is resonant and enduring today.

Reviews of “The Unwinding”:

Elizabeth Taylor, a past NBCC President, is Literary Editor of the Chicago Tribune. @etayloretayor