In the weeks leading up to the March 13 announcement of the 2013 NBCC award winners, Critical Mass highlights the thirty finalists. Today, NBCC board member Marcela Valdes offers an appreciation of Leo Damrosch’s biography finalist, “Jonathan Swift: His Life and His World” (Yale). 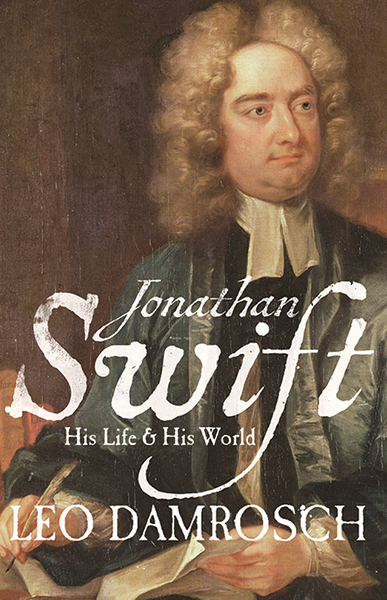 Innovative, resentful, lapidary, arrogant, generous, secretive, playful, and angry: Jonathan Swift hated Ireland and became its national hero. He was devoted to the church and subverted religion in his satires. He disapproved of lewd conversation and penned scatological poems. In short, he is one of the most complicated, contradictory subjects that biographer could take on. Compounding difficulties is the fact that the documentary record for most of Swift’s life is scant. “Nothing is certain about his early years,” Leo Damrosch observes, “including the date of his birth.”

Damrosch’s tolerance for mystery is one of the outstanding features of his spellbinding biography. Where others have filled the gaps with unsupported suppositions, Damrosch consistently surveys the available evidence and recognizes its limitations. Here he is on Swift’s most devoted companion:

“Given that Stella was Swift’s closet friend during her entire adult life, and also that mutual friends saw them both almost daily, it is extraordinarily difficult to get her into focus. What was she really like? Were they in love? Did she want to marry Swift, and did he refuse? Or did he indeed marry her but insist on keeping it a secret? We don’t even know what Stella looked like, since no authentic portrait exists.”

Such questions are a sign of scrupulous intellectual integrity. They also deepen Damrosch’s narrative, giving us a visceral sense of biography’s essential tasks, which are not only to solve a life’s puzzles but to remark them.

And what a puzzling man Swift was. Born at the end of the 17th century, he spent the first 34 years of his life in peevish frustration — failing to realize his any of his grand ambitions. Then in 1701, with the publication of a brilliantly disguised treatise on the impeachment of three Whig peers, he established himself as the most clever and forceful polemicist in London. In subsequent years, he would anonymously author dozens of political pamphlets and poems, becoming the trusted collaborator of the Tory elite and one of the most influential men in England. Damrosch quotes Virginia Woolf: “Nobody could buy his services; everybody feared his pen.”

Swift’s favorite tack was impersonation: stealing the voice of, say, a historian or a merchant or a forsaken lady to make his political points through irony and analogy. In his late-life masterpiece “A Modest Proposal”— published at a time when ruined crops, bitter cold, and Protestant landowners had many Irish begging in the streets—he adopted the detached diction of an economist to suggest that the Irish save themselves from starvation by eating and selling their children. “I grant this food will be somewhat dear,” he writes, “and therefore very proper for landlords, who, as they have already devoured most of the parents, seem to have the best title to the children.”

Born in Ireland, Swift always thought of himself as English. He settled firmly back in Dublin only when his Tory friends fell from power in 1714, helping him into the post of dean of St. Patricks Cathedral on their way out. Damrosch superbly demonstrates how Swift’s “six years of enforced silence, watching close friends persecuted or driven into exile [by the ascendant Whigs], had embittered him against the land he once identified with so strongly” — and primed him to become a champion of Irish rights.

Swift’s best-loved book, Gulliver’s Travels, captures the enduring playfulness and sour disillusionments of this post-London period. In his final years, even as his reputation soared, Swift’s body deteriorated with Ménière's Disease and his mind corroded with dementia. But his passions still burn through Gulliver’s uncanny adventures, and in Damrosch’s exceptional book.

Laura Collins-Hughes in the Boston Globe.