In the weeks leading up to the March 13 announcement of the 2013 NBCC award winners, Critical Mass highlights the thirty finalists. Today, in the eighth of our 30 Books 2013 series, NBCC board member Rigoberto González offers an appreciation of Denise Duhamel's poetry finalist, 'Blowout' (University of Pittsburgh Press). 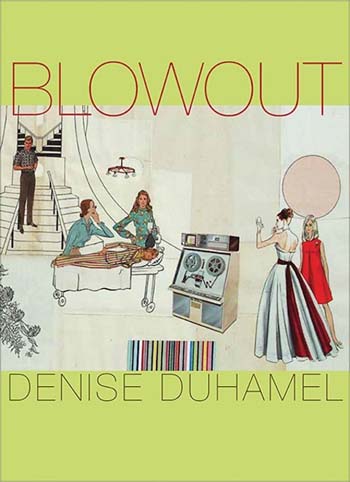 Denise Duhamel’s poetry has been consistently appreciated for its humor and conversational voice. She achieves an immediate intimacy with the reader as she moves seamlessly from amusing observation to more politicized arenas expressed through satire and critique, particularly when her work examines body image and the representations of women. Though she’s taken to task such icons as Barbie the doll in Kinky (1997) and  the class politics of American capitalism in Ka-Ching! (2009), Duhamel invites readers on a more personal journey with Blowout, which is, at its core, the story of a broken marriage: “And now, my husband and I won’t grow old together as I once thought we would, in our favorite booth of our favorite Miami Denny’s, eating senior specials, eggs and bacon. Now he has his porn and I have my word games.”

Indeed, the speaker–a poet whose word games are also her inventive poems– must re-orient herself as she inhabits the cruel world where the newly-single woman must push against the social stigma of being a middle-aged divorcée. But those feelings of shame, failure, and rejection are eventually stripped-away, though not without struggle, as the speaker takes note of a fortune cookie message (“You have to accept loss to win.”) and then proceeds to find strength in the history of heartaches she has lived through. She can survive this one also

that the average reader might not care about this particular narrator’s plight.

So I don’t blame you, dear reader, for not caring about mine either.

I will try to be more likable in my next poem.

For now, I’m broke and alone. A Dolly Parton song.

Still, I am trying harder, faster. Still, I’m trying to learn the art.

Interview on The Rumpus.

Rigoberto González, author of eight books and recipient of both Guggenheim and NEA grants, reviews for the El Paso Times twice a month and is currently teaching at the MFA writing program of Rutgers-Newark, the State University of New Jersey.