In the weeks leading up to the March 13 announcement of the 2013 NBCC award winners, Critical Mass highlights the thirty finalists. Today, in the eighth of our 30 Books 2013 series, NBCC board member David Biespiel offers an appreciation of Louise Brock-Broido's poetry finalist, 'Stay, Illusion' (Knopf). 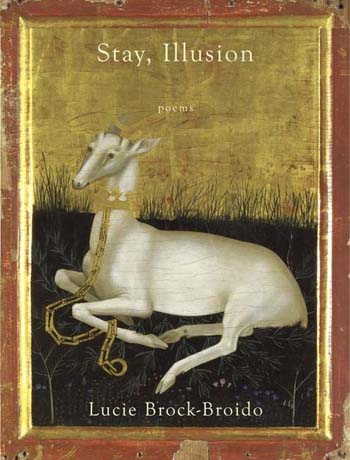 Poets can be sorted into two types: poets of the body and poets of the mind. Lucie Brock-Broido is most certainly of the latter. She minds, and mines, the large and small auras of language the way a chemist minds and mines the auras of the elements. Stay, Illusion is a dreamy stereoscope, and it is one of the finest examples of thinking and making argumentation through the art of poetry of any book of poems published last year.

Most impressive in this collection is the way Brock-Broido's mind negotiates freedom and lucidity, shadows and doves, misfits and museums, comas and matadors, cages and birds, and all manners of though and feeling. The book opens with the expression, “Silk spool of the recluse,” and closes with the sentence, “It is not volitional.” This is a fair depiction of the range of Brock-Broido's ideas. On the one hand, a spool is a device around which flexible things are wound. On the other hand, experience is not always understood or enacted with deliberate intention. It can be non-volitional. Such tension between intention and non-intention plays itself out with fresh depth and solidity as the two tensions reveal the different angles of the same experience.

Consider what I mean in the opening lines, for example, of “Extreme Wisteria:”

On abandon, uncalled for but called forth
The hydrangea of her crushed each year a little more into the attar of herself.
Pallid. Injured. Wild in ecstasy. A throat to come home to, tupelo.
Lemurs in parlors, inconsolable.
Parlors of burgundy and sleigh. Unseverable fear.
Case history: wistful, woke most every afternoon
In the green rooms of the Abandonarium.
Beautiful cage, asylum in.

What I appreciate, also, is the excited energy you can find in this sort of writing. To say that there are poets of the body and poets of the mind might imply, to some, that the flesh is lively and the brain is grave. But it is not the case with Brock-Broido in Stay, Illusion. The mind is excited and energetic. The poems romp across the word-life of their subjects: uncalled for-called forth, home to-tupelo, pallid-parlors, injured-in ecstasy, history-wistful, Abandonarium-asylum in. This lyric scamper makes for highly pleasurable reading.
In a literary moment when poets are deeply invested in the improvisational mode for expression, Stay, Illusion offers a counter-balance. It's a book that maneuvers in a manner that appears to be extemporaneous, but the poems' systematic process of reasoning reveal Stay, Illusion to be wonderfully methodical in the ways that Brock-Broido dramatizes ideas about a haunting dolefulness.