In the weeks leading up to the March 13 announcement of the 2013 NBCC award winners, Critical Mass highlights the thirty finalists. Today, in the seventh of our 30 Books 2013 series, NBCC board member David Biespiel offers an appreciation of biography finalist Scott Anderson's Lawrence in Arabia (Doubleday). 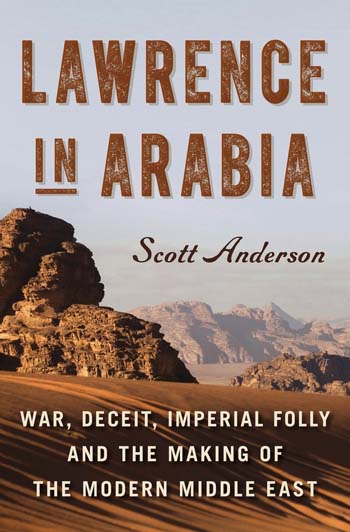 Strange fact: I've seen David Lean's epic film, Lawrence of Arabia, at least a dozen times. I've read T. E. Lawrence's account of his time in the Middle East during the First World War, Seven Pillars of Wisdom, as well as Revolt in the Desert, several times as well. None of those books, or other biographies of Lawrence I've lugged around, shelf-loads really about World War I generally, had prepared me for the decency, insight, and sturdy revelations in Scott Anderson's Lawrence in Arabia: War, Deceit, Imperial Folly and the Making of the Modern Middle East.
It's a book as much about the history of the events that led to the Arab Revolt against the Ottoman Empire in the Arabian desert between 1914-1918, those events themselves, as it is, most importantly, about how those events laid the groundwork for the contemporary crisis in the Middle East today, including conditions between Israelis and Palestinians, the Syrian civil war, the rise of ultra conservative Wahhabism, and a longstanding skepticism about the intentions of the West in Arabia.

Anderson is a gifted writer whose experience as a war correspondent ios in evidence. He blends the military history of WWI with story of T.E. Lawrence and with those of the lives of three men in the region at that time, each of whom envisions himself as part revolutionary, part adventurer, and part master of the universe: German Curt Prufer who was a spy working with the Ottoman Turks to defeat the British, Zionist Aaron Aaronsohn who led an important secret Jewish spy ring that helped lead to a homeland for the Jews in Palestine, and American William Yale (yes, of that Yale fame) who becomes the only American state department representative in the Middle East during the war while also, secretly, working for Standard Oil. In addition, there are the important Arab political figures in the arena — Djemal Pasha, the capricious Turkish governor of Syria, and the mercurial Prince Faisal of Mecca, to name two — both of whom are at odds as much as in cahoots, depending, with England, France, Russia, and the U.S. as the new, post-Ottoman Middle East comes into being.

The book too exposes the folly of great nations believing in their own invincibility. And, here, I'm thinking explicitly of the United States vis a vis the 9-11 Wars in Afghanistan and Iraq at the start of this century. Anderson's richly detailed account of the British fiasco at Gallipoli demonstrates the stupid decisions made prior to that disastrous invasion. He also explains, despairingly so, how the Mediterranean port city of Alexandretta near the Syrian-Turkish border, which Lawrence begged British officials to invade and capture, was ignored by the British military and political command even as it represented the Turk's most vulnerable locale and could have quickly (though nothing is certain in war, which is one of the book's chief lessons) weakened the Ottoman position and by extension their allies, the German's, as well. And, I should add, as Anderson implies, might have saved the lives of hundreds of thousands of Armenians slaughtered by the Turks.

Lawrence in Arabia does more than tell, yet again, the story of T.E. Lawrence. Instead, it get at the roots of the difficulties of today's Middle East, from the troubled Arab Spring to the always-troubled Israeli-Palestinian negotiations to unending conflict between tribal factions. It does so, I should add, by implication. Because, at heart, Lawrence in Arabia is a political and military thriller about the demise of colonialism and the rise of a modern Middle East. Plus and all, there is the story of one mystifying British junior officer who took it upon himself to put the regional ambitions of the Arab people ahead of the imperial designs of his native England.