What is your favorite National Book Critics Circle finalist of all time? The first NBCC winners, honored in 1975 for books published in 1974, were E.L. Doctorow (Ragtime, fiction), John Ashbery (Self-Portrait in a Convex Mirror, poetry), R.W.B. Lewis for his biography of Edith Wharton, and Paul Fussell (The Great War and Modern Memory, criticism). In 2014 the National Book Critics Circle prepares to celebrate nearly forty years of the best work selected by the critics themselves, and also to launch the new John Leonard award for first book. So we're looking back at the winners and finalists, all archived on our website, and we've asked our members and former honorees to pick a favorite. Here's the sixteenth of dozens of choices in our latest in six years of NBCC Reads surveys. 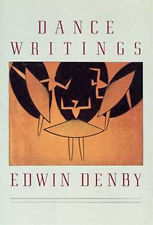 To peruse the list of NBCC winners and finalists over some forty seasons, at a late hour, after a long work day, and be charged with picking a favorite, one, is almost painful. I see authors I’ve adored, and taught, and known, and even worked with, as well as one or two dear friends and at least three beloved teachers. Choose? Between Borges and Nabokov? Between Elizabeth Bishop and Czeslaw Milosz?

For a long while, I lingered over Eudora Welty, whose essays, short stories, and memoir I teach to freshmen every spring; her style is both cleansing in its procedures and mysterious in its effects—with all the big, complicated issues bubbling up between sentences, evoked by simple words, dowsed from basic observations. How could I not say Eudora Welty?

But I’ve chosen the poet, dance critic, dancer, and choreographer Edwin Denby (1903-1983), whose collected Dance Writings won for criticism in 1987, the year when the finalists in that category included both Robert Lowell for his Collected Prose and the collection Sight Lines by the dance critic Arlene Croce, whose writing Denby loved so much that he would read it aloud to prepare him for the night; and the choreographer Paul Taylor (whom Denby admired) was a finalist in biography/autobiography for his Private Domain, and Philip Roth won in fiction for The Counterlife, and Richard Rhodes won in general nonfiction for The Making of the Atom Bomb, and the Ivan Sandrof award went to Robert Giroux. A vintage year.

“Dance criticism has two different aspects: one is being made drunk for a second by seeing something happen; the other is expressing lucidly what you saw when you were drunk,” Denby wrote in 1954, in an essay called “Dancers, Buildings, and People in the Streets.” “I suppose I should add quite stuffily that it is the performance you should get drunk on, not anything else. But I am sure you have understood me anyway.” However, the intended audience for this essay—dance students at The Juilliard School—never had a chance to understand him or to chuckle at his joke.

Denby, soft-spoken and terribly shy, never delivered his address. Prior to his posthumously published Dance Writings, the world only knew of it because the persevering dance reporter and critic Jacqueline Maskey gathered some of Denby’s later writings into a volume, edited by Denby's friend the agent Robert Cornfield, for which “Dancers, Buildings, and People in the Streets” lent its title to the whole. (Denby himself never sought to collect his prose on dance. We have the music critic B.H. Haggin to thank for the existence of Denby's first collection, Looking at the Dance. And his Dance Writings, published posthumously, was edited by Cornfield and graced with an exemplary biographical introduction by another Denby friend, William MacKay.)

There are a couple of reasons to offer Edwin Denby as a nonpareil, even in the NBCC list’s august company. His poems, partially Cubist, partially Surreal, always attuned to some flaring and unpredictably dislocating Now, release the slang of New York streets into gently containing, unemphatically present forms derived from his readings in the Renaissance and from his immersion, for decades, in Dante, especially the “Purgatorio” and “Paradiso.” His Now swims in an oceanic Then.

As a writer on painting of the 1930s, particularly of his friend Willem de Kooning, Denby just walks into the art as if it were a subway car; he makes the act of looking an activity that transports one from Here to There. But his readership in these genres is small and specialized, although it does encompass several generations of practicing poets for whom his work functions as a kind of aquifer, life-giving as spring water and without pomp of any kind. Denby is a giant because of his dance writings. It doesn’t matter, either, if he was writing an essay for Evergreen or an overnight review for the Herald-Tribune: Every writing has something to teach; every writing is interesting. And he takes the reader deeply inside himself, as in “A Note on Kabuki,” where he recounts how, out of sheer boredom, he began to look with special care at an older actor; before one knows it, the actor has sprung up alive in Denby’s prose.

Sometimes, more than the performer is resurrected. His first published dance review, “Nijinska’s ‘Noces,’” from a 1936 issue of Modern Music (where Denby enjoyed the fabulous editing of Minna Lederman), evokes the very rhythm of the opening bars in Stravinsky’s score: “Noces is noble, it is fierce, it is simple, it is fresh, it is thrilling. It is full of interest. It is perhaps an indication of the heroic age of Nijinsky.” Later in the collection, we see Denby discover and explore the art of George Balanchine, the love of Denby’s life, as far as dance is concerned.

As the writer begins to understand just how great an artist Balanchine was, the prose grows increasingly lighter and discrete—and probing, though particular revelations are left to the reader's imagination. In a 1953 profile of the choreographer, for Dance Magazine, Denby reports Balanchine’s often-stated view that ballet is “entertainment.” However, even Balanchine can’t get away with that in Denby’s presence: “But he looked at me and added, in a more personal tone, that when one makes a ballet, there is of course something or other one wants to say—one says what one says. He looked away, as if shrugging his shoulders, as one does after mentioning something one can’t help but that one doesn’t make an issue of in public.” That is, the “just dance” modernist is revealed to intend levels of personal meaning in his work after all. The revelation is huge, and it is sufficient. Denby turns off the spotlight and lets Balanchine's intentions, so closely guarded, remain Balanchine's.

Elsewhere in this book, Denby compares a dance phrase to “speech in the silence of the night.” In other words, hushed, undistracted speaking, which originates very deep down. That is the tone of Denby’s dance commentary, too—no matter where one opens his collected dance writings: firm yet not insistent, intimate yet not embarrassing, exactingly reportorial yet not pedantic, musical for those with ears to hear. All that Dante, everywhere present and nowhere visible. –

Mindy Aloff, a past board member of the National Book Critics Circle, is the author of Hippo in a Tutu: Dancing in Disney Animation and the editor of Leaps in the Dark: Art and the World by Agnes de Mille, of Dance Anecdotes: Stories from the Worlds of Ballet, Broadway, the Ballroom, and Modern Dance, and of The Unpicturelikeness of Pollock, Soutine and Others by Louis Finkelstein. Her reviews and essays on the arts have been published widely; she was also the masthead dance critic for The Nation (1983-93) and The New Republic (1993-2001). A former fellow of the Woodrow Wilson and John Simon Guggenheim Memorial Foundations and a winner of a Whiting Writers Award, she teaches dance history and criticism and essay writing at Barnard College.