What is your favorite National Book Critics Circle finalist of all time? The first NBCC winners, honored in 1975 for books published in 1974, were E.L. Doctorow (Ragtime, fiction), John Ashbery (Self-Portrait in a Convex Mirror, poetry), R.W.B. Lewis for his biography of Edith Wharton, and Paul Fussell (The Great War and Modern Memory, criticism). In 2014 the National Book Critics Circle prepares to celebrate nearly forty years of the best work selected by the critics themselves, and also to launch the new John Leonard award for first book. So we're looking back at the winners and finalists, all archived on our website, and we've asked our members and former honorees to pick a favorite. Here's the twelfth of dozens of choices in our latest in six years of NBCC Reads surveys. 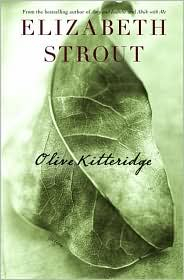 In literature, the unreliable narrator gets all of the attention—though far more interesting a creation is the truly unlikable narrator, to say nothing of one the reader still identifies and empathizes with, deeply. Such an animal is Olive Kitteridge, the heroine of Strout’s eponymous follow-up to her justly praised Amy & Isabelle. A series of brief sketches of the residents of a Maine town, Olive Kitteridge ducks the cloying school of small-town portraiture, instead using close-ups of Olive and her friends and relatives to tease away at the threads of anger, pettiness, and fear that can leave a life unraveled and unfulfilled.

Olive, a retired schoolteacher whose son lives in New York and whose pharmacist husband, we learn, lusts after his coworker, is as intemperate and moodily violent as Strout’s prose is lucid and remarkable. An aging woman given to mordant observations on her own now-loveless marriage, her distant son, and her life’s work, universally unhailed, she is the kind of mother who’s capable of secretly desecrating her daughter-in-law’s clothes with magic marker, for spite.

However, Strout is not interested in condemning Olive’s rage, or making it a comically overwrought co-character. The woman who is impatient with the idiocy of her neighbors, who cheers at their small setbacks, also saves a former student from driving himself off a cliff and attempts to force an anorexic girl to eat. But the part of Olive who chides her husband while they lie trussed on the floor during a stick-up, who is sad to realize her slight relief at his later death, who finds that she neither loves nor likes her son, is not any different from the part who weeps fitfully at a lost love of her own. Olive is impatient—with life, with grief, with happiness, with death—and her impatience occasions actions both beneficial and almost unbearable to those around her.

With Olive Kitteridge, we’re given a profound portrait of how seldom we actually rise to the occasion, how few breakthroughs we are allowed, how fleeting is happiness, how we are, at base, little more than squalling infants at life’s trials, fundamentally inconsolable. But Strout’s writing also has a deep vein of humor, a remove both wise and witty. How often does a novel feature an older woman—and an older woman who is bound to those around her at the same time she can’t help but fundamentally alienate them? I didn’t think anyone could mine anew the trope of the small town hiding its many miseries, but Strout’s masterful work remakes it, then transcends.

Lizzie Skurnick is a former NBCC board member, a widely published book critic, and a weekly contributor to the New York Times Magazine. Her Jezebel column about books she loved reading while growing up became the book Shelf Discovery: The Teen Classics We Never Stopped Reading. This fall she launched Lizzie Skurnick Books, to bring back YA classics.