What is your favorite National Book Critics Circle finalist of all time? The first NBCC winners, honored in 1975 for books published in 1974, were E.L. Doctorow (Ragtime, fiction), John Ashbery (Self-Portrait in a Convex Mirror, poetry), R.W.B. Lewis for his biography of Edith Wharton, and Paul Fussell (The Great War and Modern Memory, criticism). In 2014 the National Book Critics Circle prepares to celebrate nearly forty years of the best work selected by the critics themselves, and also to launch the new John Leonard award for first book. So we're looking back at the winners and finalists, all archived on our website, and we've asked our members and former honorees to pick a favorite. Here's the fourth of dozens of choices in our latest in six years of NBCC Reads surveys. Ruth Stone's “Ordinary Words” won the NBCC poetry award in 1999. 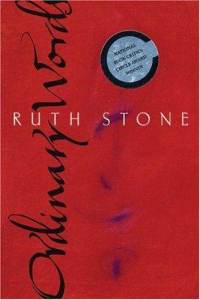 It's virtually impossible to decide on a single favorite from the glittering list, but after scrolling through it several times, I will nominate Ruth Stone as perhaps the most fascinating (and among the most brilliant) of the prize winners.  As you know, Ruth–who died a few years ago at the age of 96–won quite a few prizes in her lifetime,  including not just the NBCC but the National Book Award and the Wallace Stevens Prize.  But for incomprehensible reasons she remained, and still remains, relatively obscure, although she is an object of devotion to a widening circle of knowledgeable readers.  Perhaps her troubles began when she was widowed in her early forties; her husband, Walter Stone, a novelist and poet, left  her with three young daughters to raise, and, impoverished, she began a kind of wandering career as an academic temp at a number of campuses.  Between grief and maternity, traveling (on what she once called “Desperate Buses”) and teaching in untenured positions, she didn't have a lot of time for Po Biz and published infrequently.  By the end of her life, however, she was beginning to receive the honors she deserved, including the prizes I mentioned and, astonishingly, a tenured job at SUNY-Binghamton at the age of 75 (she retired when she was 85).  And yet–and yet–to this day it seems to me that she hasn't been properly represented in the canon-forming anthologies of our time.  I hope my vote for her here may help bring her to the attention of an even wider circle of insightful readers!  I think she should be counted among the great American voices of the 20th century.

Sandra Gilbert and Susan Gubar, both giants of the feminist movement, were honored with the National Book Critics Circle's 2013 Sandrof award for lifetime achievement. Their books changed the shape of literary criticism and influenced generations of students and scholars. The Madwoman in the Attic: The Woman Writer and the 19th-Century Literary Imagination (1979) was a runner-up for both The Pulitzer Prize and the National Book Critics Circle Award. Six years later, in 1985, the collaborators received a Ms. Woman of the Year award for their compilation of the Norton Anthology of Literature of Women, a work that appeared in a revised second edition in 1996. Gilbert and Gubar also followed up The Madwoman with a critical trilogy entitled No Man's Land: The Place of the Woman Writer in the Twentieth Century: The War of the Words (1988), Sexchanges (1989), and Letters from the Front (1994) use feminist criticism to understand the achievements of British and American literary women in modern times. Gilbert and Gubar's jointly-authored enterprises include a collection of poetry for and about mothers, MotherSongs (Norton, 1995), and a satire on the current state of literacy and cultural literacy, Masterpiece Theatre: An Academic Melodrama (Rutgers, 1995). She is distinguished professor emerita at the University of Califormia, Davis, and the author of eight collections of poetry: In the Fourth World (Alabama), The Summer Kitchen (the Heyeck Press), Emily’s Bread, Blood Pressure, Ghost Volcano and Kissing the Bread: New and Selected Poems 1969-1999 (the last four all from W. W. Norton), The Italian Collection (Depot Books), and Belongings (Norton). Her most recent volume of poems, Aftermath, was also published by Norton, in 2011. Gilbert published Rereading Women: Thirty Years of Exploring our Literary Traditions (Norton 2011). She contributed to the Poets on Poetry series at the University of Michigan with a volume entitled On Burning Ground, published in 2009. Gilbert has also published a memoir, Wrongful Death (Norton) and an anthology of elegies, Inventions of Farewell (Norton), along with a number of critical works, including Acts of Attention: The Poems of D. H. Lawrence (two editions, Cornell and Southern Illinois), and essays in journals ranging from Critical Inquiry and PMLA to Massachusetts Review, Kenyon Review, Partisan Review and others. Her poetry and fiction have appeared in such periodicals as Poetry, Field, the Ontario Review, Epoch, the American Poetry Review, American Scholar, and the New Yorker.