What is your favorite National Book Critics Circle winner or finalist of all time? The first NBCC winners, honored in 1975 for books published in 1974, were E.L. Doctorow (Ragtime, fiction), John Ashbery (Self-Portrait in a Convex Mirror, poetry), R.W.B. Lewis for his biography of Edith Wharton, and Paul Fussell (The Great War and Modern Memory, criticism). In 2014 the National Book Critics Circle prepares to celebrate nearly forty years of the best work selected by the critics themselves, and also to launch the new John Leonard award for first book. So we're looking back at the winners and finalists, all archived on our website, and we've asked our members and former honorees to pick a favorite. Here's the second of dozens of choices in our latest in six years of NBCC Reads surveys. Elizabeth Bishop's Geography III (1977), an NBCC finalist, included her widely anthologized poem “One Art.” 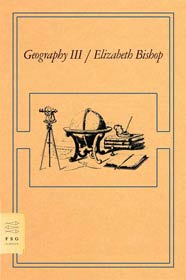 I have taught Elizabeth Bishop's “One Art” to generation of freshmen at Indiana University and still find it such a brilliant imaginative feat that helps students (and me) come to terms with losses big and small so I vote for Elizabeth Bishop.

Susan Gubar and Sandra M. Gilbert, both giants of the feminist movement, were honored with the NBCC's 2013 Sandrof award for lifetime achievement. Their books changed the shape of literary criticism and influenced generations of students and scholars. The Madwoman in the Attic: The Woman Writer and the 19th-Century Literary Imagination ( 1979), was a runner-up for both The Pulitzer Prize and the National Book Critics Circle Award. Six years later, in 1985, the collaborators received a Ms. Woman of the Year award for their compilation of the Norton Anthology of Literature of Women, a work that appeared in a revised second edition in 1996. Gilbert and Gubar also followed up The Madwoman with a critical trilogy entitled No Man's Land: The Place of the Woman Writer in the Twentieth Century: The War of the Words (1988), Sexchanges (1989), and Letters from the Front (1994) use feminist criticism to understand the achievements of British and American literary women in modern times. Gilbert and Gubar's jointly-authored enterprises include a collection of poetry for and about mothers, MotherSongs (Norton, 1995), and a satire on the current state of literacy and cultural literacy, Masterpiece Theatre: An Academic Melodrama (Rutgers, 1995). Gubar is the author of Racechanges: White Skin, Black Face in American Culture (Oxford, 1997), Critical Condition: Feminism at the Turn of the Century (Columbia University Press, 2000), and Poetry After Auschwitz: Remembering What One Never Knew (Indiana University 2003), Rooms of Our Own (2006), and a cultural biography of Judas (Norton 2009). In 2007, with Sandra M. Gilbert, she published a third edition of the Norton Anthology of Literature by Women as well as a Norton Reader of Feminist Literary Theory and Criticism. Distinguished Professor Emerita of English, she taught at Indiana University for more than thirty-six years.