In the weeks leading up to the February 28 announcement of the 2012 NBCC award winners, Critical Mass highlights the thirty finalists. Today in our series, NBCC board member Gregg Barrios offers an appreciation of fiction finalist NW (The Penguin Press) by Zadie Smith. 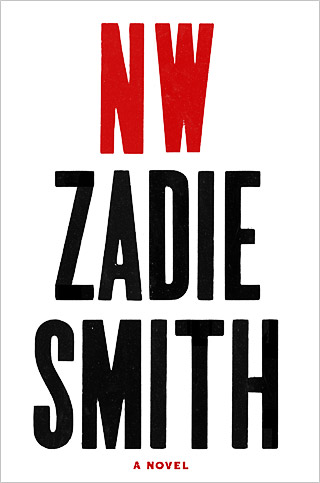 Tread carefully over the pavements of London for you are treading on skin, a skein of stone that covers rivers and labyrinths, springs and cavern, pipes and cables, springs and passages, crypts and sewers, creeping things that will never see the light of day.                  – Peter Ackroyd, Underground London

Welcome to London’s NW – home turf to Zadie Smith’s fictional wellspring. It’s the place where many of her earlier characters still reside – from Archie Jones, Irie and Alsana from White Teeth to Howard Belsey’s dad from On Beauty and Alex-Li Tandem from Autograph Man.

NW introduces a new cast of characters – Leah, Natalie, Felix and Nathan – all in their mid-thirties, and with multi-racial roots – this is a Smith novel after all – and who grew up in the fictional council estate (housing project) of Caldwell.

Smith’s tells their stories with precise details and rich characterization, vividly capturing their individual personalities by utilizing a writing style suited to each. The opening chapter finds Leah daydreaming in a backyard hammock:

The fat sun stalls by the phone masts. Anti-climb paint turns sulphurous on   school gates and lampposts. In Willesden people go barefoot, the streets turn European, there is a mania for eating outside. She keeps to the shade. Redheaded. On the radio: I am the sole author of the dictionary that defines me. A good line—write it out on the back of a magazine. In a hammock in the garden of a basement flat. Fenced in, on all sides.

Her reverie comes crashing when the doorbell rings and a strange woman with a hard luck story asks for money. Through Smith’s deft descriptions, it is evident that the women are as different as night and day despite living in the same NW postal code. How Smith forges connections between them and the other denizens in da hood is part of what NW grapples with.

It isn’t for naught that the chapter is called “The Visitation.”  It echoes the Biblical Mary visiting her older, barren cousin Elizabeth to announce her pregnancy and then to learn that her cousin is also in a family way. Throughout the novel, Leah will struggle with not wanting to have a child and with her denial that she may already be pregnant (“Blue cross on a white stick, clear, definite”).

Smith has acknowledged the influence of Forester’s Howards End on her novel On Beauty, and that the inspiration for NW comes from the novelist Virginia Woolf.  Some critics have written that since Leah is part Irish, her narrative emulates a Joycean style. I prefer to consider that the NW postal zone is more akin to Faulkner’s fictional Yoknapatawpha County and his novel As I Lay Dying. Both employ stream of consciousness technique, multiple narrators and varying chapter lengths and voices. One section will have quotation marks, while another will do without the punctuation. NW speaks in the polyglot of the street and in slogans and the TV news sound bites of dinner parties.

In the novel’s first section, Leah works for a charity trust and her husband Michel, a French-African, is a hairdresser. They rent and have a dog Olive. Leah doesn’t want children, but Michel does. When they attend a posh party given by Leah’s lifelong friend Natalie, we learn the different roads they’ve taken. Natalie nee Keisha Blake has moved up in the world. She is a barrister who is happily married to an Italian-Trinidadian; they have two children. At the party, Natalie appropriates Leah’s story about the woman who bilked her. Later Leah and Michel spot a man thought to be the grifter’s partner. A street row ensued, and Olive was repeatedly kicked. Natalie turns it into a bad after-dinner joke. (“- And then did you just both go your separate ways? ‘Thank you, I’ve been your potential murderer now I must be off…’”

Natalie is novel’s central character. She tells her story in “The Host,” a series of short, numbered (185) chapters. In the initial entry, “These red pigtails,” Keisha saves Leah from drowning by pulling her out of a city pool by her red pigtails. (Think Renoir’s Boudu Saved From Drowning).

There is a wonderful list (in # 6) of the girl’s middle school likes and dislikes. Keisha: Cameo, Culture Club, Bob Marley, world peace in South Africa. Leah: Madonna, Culture Club, Thompson Twins, no bombs. Oh, they list one another as their best friend. And to an unknown question, they both answer “Deaf.”

Smith never identifies the color of her characters – well, not unless they are white. A subtle dig at how other-than-whites are described in more traditional novels. In a telling short entry, Smith succinctly describes Keisha’s mindset growing up in a white world:

18. Sony Walkman (borrowed). That Keisha should be able to hear the Rebel MC in her ears was a kind of miracle and modern ecstasy, and yet there was very little space in the day for anything like ecstasy or abandon or even simple laziness, for whatever you did in life you have to do it twice as well as they did ‘just to break even, a troubling belief held simultaneously by Keisha Blake’s mother and her Uncle Jeffery, know to be “gifted” but also beyond the pale.

Keisha reinvents herself as Natalie and escapes from the Caldwell projects. But as the novel progresses, Smith seems to be asking – But at what a cost? Natalie’s entry 179: “Aphorism. What a difficult thing a gift is for a woman! She’ll punish herself for receiving it.” Natalie will do the same thing with her gift (An oblique reference to the late Amy Winehouse).

Enter Felix in the section titled “The Guest.” Felix is a native of the Caldwell projects. His story is told in a traditional narrative style. Neither Leah nor Natalie know him, but they will by the novel’s end. This chapter chronicles Felix’s last day alive. It begins as he delivers a book to his father that his new lady friend Grace has bought for him. The book is a photographic record of Garvey House, an actual hostel for troubled youth in northeast London where Felix and his siblings grew up with their Black revolutionary parents. Felix then takes a walk through the old neighborhood on his way to buy a used car for the repair shop where he works part time.

This section contains some of Smith finest writing and could well stand alone outside the novel’s frame, but it is also integral to it. I kept hoping Smith would speak through Felix (with his parents activist past and his dream of becoming a filmmaker) of the recent London Riots and British film hit Ill Manor – that speak of the disenfranchisement of today’s multiracial Brit youth.

Some readers may see the 32-year old Felix as a sacrificial lamb, a Christ-like figure hinted in book’s religious-tinged chapter titles, “Visitation,” “Host,” “The Crossing.” (The thrust of the narrative here resembles the Stations of the Cross). A few hours before his death, his pays a visit to Annie, his older, former lover intent on ending their relationship since he has found Grace (pun intended):

Felix what is this pathological need of yours to be the good guy? It’s very dull. Frankly, you were more fun when you were my dealer. You don’t have to save my life. Or anybody’s life. We’re all fine. We don’t need you to ride on a  white horse. You’re nobody’s savior.

Hours later, he lays dying at a bus stop, the victim of a blotched robbery and assault, his life unreeling in jump-cut not unlike Belmondo’s end in Breathless: “Five and innocent at this bus stop. Fourteen and drunk. Twenty-six and stoned. Twenty-nine in utter oblivion, out of his mind on coke and K.”

Natalie becomes addicted to online hook-up website where “she was what everyone was looking for.” Her Cinderella story turned Grimm after her husband discovers her sexual addiction. She finds herself down and out on the London underworld in “a big T-shirt, leggings, and a pair of filthy red slippers, like a junkie.”

A former classmate Nathan Bogle, a drug-dealer and perhaps a pimp for the woman who rang Leah’s doorbell, recognizes her. At first, they enjoy rediscovering their mutual past. She tells him how Leah was in love with him. “She’d never admit it but the man she ended up marrying – he looks like you.” Nathan isn’t having any of it.

Oh Nathan ‘member this, ‘member that – truthfully Keisha I don’t remember. I’ve burned the whole business out of my brain. Different life. No use to me. I don’t live in them towers no more. I’m on the streets now, different attitude. Survival. That’s it. Survival. That’s all there is.

Nathan is ultimately the dark messenger not the message – all the while singing, “If I Ruled the World (Imagine That).”

The final section is a return to “The Visitation.” Carnival is in full swing. Leah and Natalie reestablish their on-again, off-again friendship. When Natalie enters Leah’s backyard carrying her dog Spike, she greets them: “Look at you, mother and child. Look at you. You look like the fucking Madonna.”

Smith wrote NW during her pregnancy, so it isn’t surprising that her characters both male and female have bringing children into the world on their mind. All throughout NW, its characters constantly talk about wanting or not wanting children, of mothers that abandon their kids, of irresponsible fathers that procreate but avoid responsibility, and of a loony who sings, “If I ruled the world. I’d free all my sons.”

Reading NW evokes memories of that series of British documentaries from 7UP to 56 UP (most directed by Michael Apted). Starting at age 7, a group of children from different socio-economic classes were filmed every seven years to see how they and their friends and families changed over the years and if socio-economic variables predetermined their future. Smith in NW (30 something) accomplishes the same in one majestic swoop. Imagine that!