In the weeks leading up to the February 28 announcement of the 2012 NBCC award winners, Critical Mass highlights the thirty finalists. Today in our series, NBCC board member Carolyn Kellogg offers an appreciation of criticism finalist Waiting for the Barbarians (New York Review Press) by Daniel Mendelsohn. 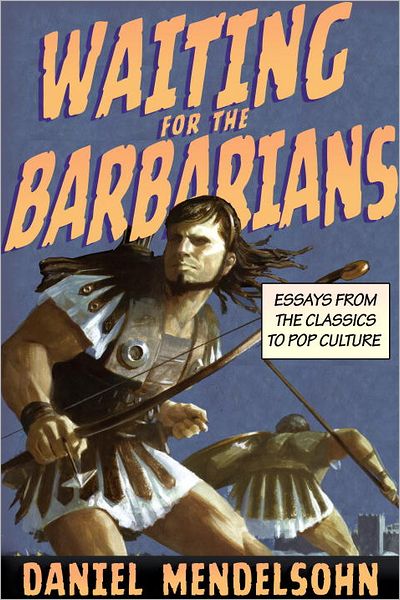 In some ways, Daniel Mendelsohn is a cultural critic of the old school. The kind who is steeped in the classics, conversant in French, intellectually nimble, with a deep curiosity about pop culture and a ready wit — if Dick Cavett's show were still on the air, there Mendelsohn would be, chatting with Groucho or Borges. Instead, we get him mostly on the page — the New York Review of Books and, almost as frequently, the New Yorker. Those pieces are gathered in his 2012 collection Waiting for the Barbarians, published by the NY Review of Books.

In the collection, Mendelsohn examines, considers and dissects the movie Avatar (he likes it more than you), Greek myths and the musical version of Spider-man, Jonathan Littell's The Kindly Ones, the forgotten novels of Theodor Fontane, Arthur Rimbaud, Anne Carson, fake memoirs, Susan Sontag as thinker and novelist, and Mad Men (he likes it less than you). The Guardian writes that this collection of essays have “startling range,” while Philip Lopate calls Mendelsohn “one of our liveliest, most intelligent cultural critics”

“I'm looking at everything, from 'The Lovely Bones' to 'Avatar' to a new novel based on the Iliad, and trying to figure out what it all means — as if it were the year 4012 and I'm looking back 2,000 years at 'American culture,'” Mendelsohn told me in an interview. “Oddly enough, it's my training, a long time ago, as a Classics scholar that gave me this broad perspective. When you study the ancient Greeks and Romans, you don't just study the 'high' stuff — you study everything, high and low, the erudite poetry but also the bawdy popular theater, with its scatological humor and foul-mouthed diction; you look at graffiti and pornography and kitchen utensils and tchotchkes, and try to put a picture together of what the whole culture was like, based on your deep study of all this detritus. In a way, I guess you could say that that's what I'm trying to do in the criticism I write.”

Mendelsohn is “systematic and pedagogical,” writes Parul Sehgal in the NY Times. In Bookforum, David Haglund points out Mendelsohn's gift for making compelling reading out of a mixed review. “One never finishes one of Mendelsohn’s reviews feeling like he had it in for, say, Jonathan Franzen, or Anne Carson, or Matthew Weiner—to cite three writers who get dinged harder than most in the new collection. He expresses considerable admiration for Franzen and Carson—though not so much for Weiner, the creator of Mad Men, which Mendelsohn describes as “a soap opera decked out in high-end clothes” and dismisses as a fad….That pan of Mad Men, for instance, asks why critics and viewers have responded so rapturously to a show that he deems “weak,” “shallow,” “incoherent,” and “smug.”

His essays often have a deft structure, building an essential question that is left hanging. Keep reading… and eventually you'll arrive at the answer. But the pleasure is not in the answer, necesssarily — it's in the process.

“We love our great critics as much for being explorers as for being teachers,” writes Steve Donoghue at Open Letters Monthly. “He maintains that essential explorer’s trait: he stays limber. He might castigate Edmund White (unfairly, in my opinion) for a 'reflexive tendency to reduce everything to the dimensions of his preexisting interests and predilections,' but he has very little of the tendency himself.

Even when critics disagree with Mendelsohn's take on an author or specific work, they tend to praise his endeavor. Perhaps this is because he has such affection for the art of criticism itself. In “A Critics Manifesto,” which appeared on the New Yorker book blog Page Turner last year (not, alas, in this collection), he wrote, “In the nineteen-seventies, when I was a teen-ager and had fantasies of growing up to be a writer, I didn’t dream of being a novelist or a poet. I wanted to be a critic. I thought criticism was exciting, and I found critics admirable. This was because I learned from them….I dreamed of becoming a critic. I always grin when someone who’s interviewing me will ask if my criticism is some kind of day job (as opposed to my books, which, they imply, are “real” writing). To me, it’s the main event.”

Publisher's page for Waiting for the Barbarians