In the weeks leading up to the February 28 announcement of the 2012 NBCC award winners, Critical Mass highlights the thirty finalists. Today in our series, NBCC board member Karen R. Long offers an appreciation of biography finalist All We Know: Three Lives (Farrar, Straus and Giroux) by Lisa Cohen. 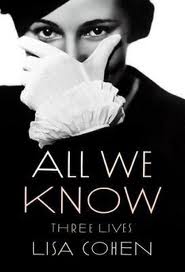 In her vigorous, beguiling triple biography, scholar Lisa Cohen considers in concert a trio of brilliant, marginalized women and beckons us to weigh their worth.  This invitation, floated out on the merits of fascinating and thwarted lives, becomes a meditation on the biographer's art.

All lives, Cohen writes, are made up of “the seductiveness of the facts and the necessity of fictions.” In this way, “every biography is a disappointment of some kind, premised on unbearable impasses and opacities, on the impossibility of bringing someone back to life, and on the paradoxes of representing, inhabiting and balancing the past and the present.”

Granted, and yet All We Know thrills us with the particulars of three 20th century figures: the prodigious conversationalist Esther Murphy, the collector and bon vivant Mercedes de Acosta and British Vogue editor Madge Garland. All three married men but preferred friendship and physical intimacy with their own sex.  Part of the joy of “All We Know” is the sharpness of the subjects; they write wittily of themselves, each other and innumerable compatriots in the cultural centers of Europe and the United States, often in dazzling stye.

“While each one published, each one also produced a body of thought that could not be worked out fully on paper,” notes Cohen, who teaches at Wesleyan University. “Juxtaposing their lives illuminates work “that has not been recognized as such: in Murphy's case, prolific conversation; in de Acosta's, the fervent, often shameful acts and feelings associated with being a fan and collector; in Garland's, a career in the ephemeral, often trivialized world of fashion.”

The grist that draws readers into All We Know is the improvised nature of a trio of glittery figures. Garland knew hunger in her young adulthood; Murphy, in her final years. All three were ridiculed.

Yet when Murphy held forth, starting with the signature, throat-clearing phrase “All we know …,” Edmund Wilson, Dawn Powell, Scott and Zelda Fitzgerald, Dorothy Parker, Mary McCarthy and Patricia Highsmith gathered round and leaned in.  Her erudition was legendary, she labored long years on a biography of Madame de Maintenon, but never came close to pulling  it off: “She talked more than anyone, drank more than anyone, was bigger, more brilliant, kinder — and yet her life seemed to her friends to hang in midair, unfulfilled.”

Likewise, de Acosta led a deflected existence, circling around “literary, theatrical, and religious greats.” Yet de Acosta was eerily prescient — she “could also be an astute analyst of celebrity and its appreciators, not only enduring and taking pleasure in, but also writing with irony and precision about the continual, conflicted needs for intimacy and distance that direct the traffic between stars and fans.”

At its core, All We Know coaxes us to ponder our assumptions about failure, in its American capitalist context, and the old presumptions that male-centric diversions — sports — are indispensable even as female-centric preoccupations — clothing and fandom and conversation — are insipid and frivolous.  This is not a new point. Garland made it herself in 1930, expanding on Virginia Woolf's observations of a year before in “A Room of One's Own.” Both these friends were students of “how we wear what we wear,” Cohen notes, and Garland read Woolf shrewdly as “a venerated writer who was scared and moved by clothes.”

What is new — and breathtaking — is how Cohen puts flesh-and-bones on profound questions of merit by lighting up complex lives. She argues forcefully that these women can't be shrugged off  as disappointments, that “none of them thought herself in need of rescue.”  Dignity flares, co-existing with invisibility and irrationality. So it might be said of most lives. Murphy liked to quote the poet priest Francois Fenelon: “C'etait tout qui etait possible, mais ce n'etait pas assez.”  Or, “It was all that was possible but it was not enough.”

In this penetrating biography, Cohen limns the ache in that line.

Jackie Lyden interview on NPR with Lisa Cohen in Paris:

NBCC Finalist Terry Castle reviews All We Know in the London Review of Books:

Lisa Cohen in the Paris Review on Sybille Bedford's centennial. (Bedford was an intimate friend of Esther Murphy, one of the subjects of “All We Know”):

Sybille Bedford at One Hundred