In the weeks leading up to the February 28 announcement of the 2012 NBCC award winners, Critical Mass highlights the thirty finalists. Today in our series, NBCC board member Colette Bancroft offers an appreciation of nonfiction finalist Private Empire: ExxonMobil and American Power (Penguin Press), by Steve Coll. 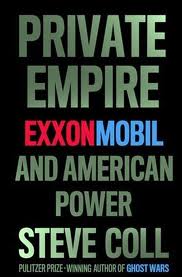 Pulitzer Prize-winning investigative reporter Steve Coll has written about resistant subjects before, in such books as The Bin Ladens: An Arabian Family in the American Century and Ghost Wars: The Secret History of the CIA, Afghanistan and Bin Laden, From the Soviet Invasion to September 10, 2001. Coll brings his extraordinary reporting skills to bear on another highly secretive and complex organization in Private Empire: ExxonMobil and American Power (Penguin Press), a finalist for the National Book Critics Circle’s award for nonfiction.

Drawing on interviews with more than 400 people, many of them ExxonMobil insiders, and extensive research into written documents, including court cases, Coll constructs a revealing history of one of the largest corporations on the planet. Framing the book between perhaps the most notorious event in the corporation’s history, the 1989 wreck of the tanker Exxon Valdez in Alaska, and the effects on the company and the industry of the 2010 Deepwater Horizon oil spill in the Gulf of Mexico, he recounts more than two decades of ExxonMobil’s activities.

The corporation is in every way a global entity, although it originated and remains based in the United States. As Coll demonstrates, the oil industry supersedes national borders, a fact that renders the notion of “energy independence” a pipe dream for any nation. He quotes Lee Raymond, ExxonMobil&rsquorsquo;s former CEO and the man who more than any other shaped the company as it is today, saying, “I’m not a U.S. company and I don’t make decisions based on what’s good for the U.S.”

Coll’s history of how ExxonMobil does business includes detailed documentation of its entanglements with dictatorships, civil wars and human rights violations on several continents; its extraordinarily close relationships with U.S. government officials, especially during the George W. Bush administration; its intensive lobbying and research funding aimed at undermining scientific evidence of global climate change and development of alternative energy sources; and the laser focus on the bottom line that has kept it one of the most enormously profitable corporations in history.

Just as impressive as Coll’s reporting is his ability to convey the story in a clear, engaging style and to explain the relationships among its many parts. Although he certainly has a point of view about ExxonMobil, he is scrupulously even-handed, laying out the facts and allowing them to speak for themselves. Private Empire is enlivened throughout by Coll’s lively portraits of many of the people involved, notably his picture of Raymond, a man nicknamed “Iron Ass” and once described by no less an expert than Vladimir Putin as “totally arrogant.”

As Private Empire makes clear, ExxonMobil’s reach and influence are so great that what it does affects every one of us. Thanks to Coll having drawn back the veil on this massive organization’s often concealed history, we have a deeper understanding of its sway.