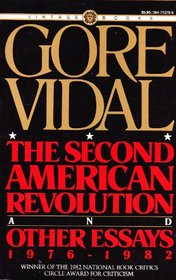 Essayist, novelist, screenwriter, and critic Gore Vidal died this week in Los Angeles. He was 86. Vidal won the NBCC award in criticism for his 1982 book, The Second American Revolution and Other Essays, 1976-82. He was also a finalist twice, for Matters of Fact and of Fiction: Essays, 1973-1976 and United States: Essays 1952-1992.

Here at Critical Mass we've occasionally taken a moment to honor Vidal's work and influence. Daniel Mendelsohn praised him as part of our Critical Library series:

To my mind Vidal in his prime was an ideal critic: the cool brilliancy of mind, the tremendous erudition coupled with an astonishingly broad range of his tastes and enthusiasms, the acidulous, patrician wit (far more entertaining, and effective, as a literary weapon, than the dreary earnestness characteristic of so many other liberal writers), and above all the complete mastery of the essay form, the way he had of weaving the personal and the intellectual into something at once engaging and significant, make him a model for the professional critic.

And in a 2008 NBCC Reads post on political books, Bob Hoover called out Vidal's novel Burr for special attention:

It’s a no-brainer to pick Gore Vidal’s Burr, his trenchant, take-no-prisoners vision of American politics dominated by cynicism and lies—in 1800—during this presidential campaign driven by empty slogans, phony ‘Joes,’ and one candidate pandering to moderate-income voters with his eight houses. The rest of Burr’s ‘Empire’ novels are equally cynical and perhaps a little goofy about the 20th century, but it’s hard to name another novelist with such concern for the politics of the country.” Goofy, you say? Michael Pinker begged to differ, anointing the last novel in the series as the best: “America’s best political novel, The Golden Age, from our best political writer, Gore Vidal, holds the mirror up to our own era with coruscating wit and grace….  Why does anyone take our politics seriously, save those who suck their substance from it? As once again in this election season they loudly hawk policies from which their backers and minions profit no matter who holds office, our Solons enact the farcical spectacle of the vaunted two-party system, an outmoded, hugely extravagant con game which Vidal himself has dubbed one party with two names.  If the plot of this novel may prove thin at times, its excoriation of the contemporary fashion in government leaves no doubt of how much we need change and reform, as well as how little we are likely to get what is best for all the people, as opposed to the privileged few, no matter who wins on November 4.