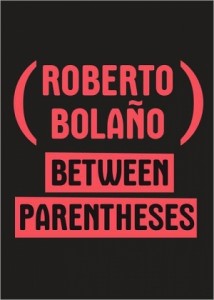 The majority of responses we received to our NBCC Reads question about literary journalism celebrated works of deep research, immersion reporting, and fine writing. Eliot Weinberger, editor of Jorge Luis Borges' Selected Non-Fictions (the 1999 NBCC award winner in criticism), wrote in with a reminder that there are other ways the term is defined around the world:

In the US, “literary journalism” means reportage that employs many of the narrative techniques of fiction; the New Yorker has created the model. Elsewhere in the world, the term, if it is used at all, would mean the newspaper columns written by poets and fiction writers. These crónicas or feuilletons—English doesn’t even have a word for it—are free-form combinations of observation, anecdote, and rumination. They are not only a regular source of income (in the absence of creative writing schools) but a way of inserting literary writers into the public discourse. Probably the last US writer of this type was Kenneth Rexroth, whose columns ran in the San Francisco Examiner in the 1960s and are now available online. In Latin America, countless writers have taken advantage of the form (and the job). Collected in English translation, Clarice Lispector’s Crónicas, Roberto Bolaño’s Between Parentheses, and Octavio Paz’s Alternating Current are excellent examples. Among the many European writers, I particularly love Joseph Roth’s dispatches from Paris and Berlin, gathered in two books (What I Saw and Report from a Parisian Paradise) translated by Michael Hofmann. One can’t even imagine a NYT op-ed page written by the likes of Lispector and Roth, rather than Maureen Dowd and Ross Douthat.

D.G. Myers, an NBCC member, faculty member at the Melton Center for Jewish Studies at Ohio State University, and author of The Elephants Teach: Creative Writing Since 1880, has some harsh words for the concept of “literary journalism” in the first place. The piece below originally ran at Literary Commentary, a blog Myers maintains at the website of Commentary magazine; we reprint it with his permission. Tomorrow Critical Mass will run a response to Myers' piece from Norman Sims, editor of the anthologies The Literary Journalists, Literary Journalism, and True Stories: A Century of Literary Journalism.

Over at Critical Mass (the blog of the National Book Critics Circle), Geoff Dyer reveals the five “works of literary journalism” that he likes best. Dyer won the Circle’s 2011 criticism award for Otherwise Known as the Human Condition, a collection of essays. It’s not his fault that his list of favorites is dull and vapid. The classification of “literary journalism” is dull and vapid.

As a term, literary journalism is first cousin to “literary fiction,” another dull and vapid classification the republic of letters could do without. Apparently, literary journalism is fancy journalism, highbrow journalism. It is journalism plus fine writing. It is journalism with literary pretensions. But here’s the thing about literary pretensions. They are pretentious. They are phony. Good writers don’t brag about writing literature, which is a title of honor. Good writers accept the moral obligation to write well — that is, they subjugate themselves to the demands of the text under hand — and they leave the question of literature, the question of lasting value, up to the literary critics.

The word journalism does not denote a genre, but a venue. Journalism is what gets printed in journals and their digital successors, including blogs and even Twitter. Literary journalism is periodical writing about literature. I am a literary journalist, because I write about books for COMMENTARY. Edmund Wilson is the patron saint of literary journalists. But when he wrote book-length criticism that was not originally conceived as a series of contributions to the journals (Patriotic Gore, for example), Wilson was no longer writing as a journalist. And when he wrote journal pieces like those collected in The American Earthquake but originally published in the New Republic (about “the arts of the metropolis, from Stravinsky conducting Pétrouchka to Houdini, nightclubs and burlesque shows, Charlie Chaplin in The Gold Rush, the painting of O’Keeffe and George Bellows,” as his biographer describes them), Wilson was no longer writing as a literary journalist.

Most of what gets referred to as “literary journalism” is some combination of history and travel writing — history because it undertakes to determine what happened in a past, travel writing because it depends upon first-hand observation in addition to documented evidence. Those who object that journalism (of any kind) is not history are doing little beyond disclosing their own prejudices and assumptions. “The question in history,” Michael Oakeshott wrote, “is never what must, or what might have taken place, but solely what the evidence obliges us to conclude did take place.” Thus the historian and the journalist share the same obligation — an obligation to the evidence. What did take place might have taken place five minutes or five centuries ago, but as long as it belongs to the past, historian and journalist share the same interest in it.

Nor do their objectives differ, no matter how far apart their methods and prose might seem to put them. Oakeshott again: “The historian’s business is not to discover, to recapture, or even to interpret; it is to create and to construct.” Both historians and journalists recreate the past in the name of reporting what the evidence obliges them to conclude took place. Historians may claim to be more comprehensive and objective; “literary” journalists, to be more compelling and timely. But these claims are justified merely by the fact that some historians and some journalists have bought into them. They are self-advertisements, not logical distinctions.

There is no reason for anyone to repeat them, nor to compile lists of their favorite “literary journalism.”