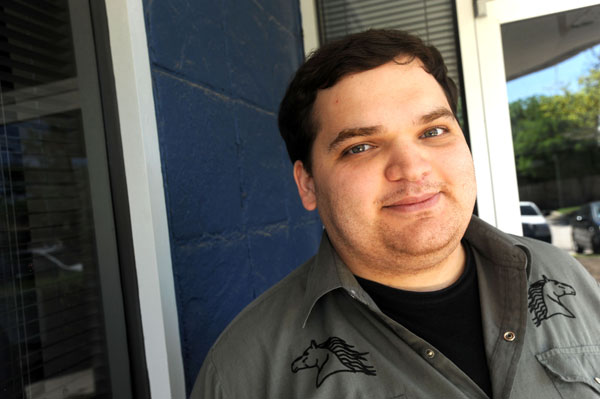 Along These Highways, University of Arizona Press, 2012.

Rene S. Perez II was born in Kingsville, Texas, and raised in Corpus Christi. He received a BA from the University of Texas and an MFA from Texas State University. He is the winner of the Alfredo Cisneros del Moral Foundation Award and currently teaches in Austin.

The setting of these stories is the South Texas Valley, a place that has inspired a number of Chicano/ Latino writers. And scholars of Chicano/ Latino letters have noted how prevalent young people are in Chicano/ Latino fiction. One unique angle in your work is that minors are relatively absent as main protagonists. Even those who are closest to adolescence (like the fraternity brothers in “Random Punchlines” and the lovers in “Remember, Before You Go”) are at the center of very adult situations. Was it a conscious decision to focus on adults and the adult world? Is that why the opening story is “One Last Drive North,” about a son who’s about to join (and eventually take over) his father’s funeral home business? The days of youth are left behind from the get-go.

A distinction to make before answering your question: These stories are not set in the ‘Valley.’ The Rio Grande Valley is comprised of Staar, Hidalgo, Willacy, and Cameron counties. Greenton, as I call it, is based specifically on Hebbronville TX, the town where my father grew up. Aside from living there a couple of years when I was very young and spending large portions of my summers there as a child, I’m not from Hebbronville and feel like I don’t have the right to set my stories there, stories I hope to represent as truly to life as possible. That said, Hebbronville is located on the west end of the Rio Grande Plain, and Corpus Christi is located on the Coastal Bend.

It was never a conscious decision to focus on adults in my stories. It may have, early on, been a sub-conscious decision. Specifically, “One Last Drive North” is the collection’s oldest story. I wrote it during my freshman year of college. Now, there have been many edits and re-workings of the story, but the idea, the action, the characters have remained. I think it’s possible, probable, even, that I was trying to write more mature characters because that’s what I was striving toward myself in that wonderfully self-serious, college freshman way. To follow this train of thought all the way, the two stories you mentioned as being about younger characters were stories I wrote later, I suppose when I felt far-enough removed from the time I was writing. As I mentioned, however, none of this was ever conscious on my part. Ideas come when they come, and I only hope I can get them down before I pollute my mind with useless noise to the point of stories washing out.

The stories “Lost Days” and “Letting Go a Dream” are also unique to the collection because, in a highway landscape that’s explored in cars, the bond to the vehicle is very male. But these two stories are narratives about mothers and their sons. In both, the women are dealing with personal losses and the anxiety of letting go or forgetting. The car, however, still functions as an agent of escape or contemplation (in the first story) and (in the second story) as a placeholder for an absent person, both a vessel of and an altar to memory. Does the expansive Texas landscape and its Old West clichés preserve these gendered associations to the car despite the fact that women must also drive? Was it a challenge to include women in a story collection that stays close to the “man behind the wheel” image, albeit he’s not always in control of his destiny (or destination)?

I hold a very true hope that these stories serve to subvert Texas’ Old West clichés. I am not afraid of ten-gallon hats; I just write stories about people who, like most Texans, don’t wear them. Those clichés do persist, but I think that anyone trying to write truthfully exposes them for what they are—familiar, but out of touch with most people’s reality. I think “Lost Days” serves well to reclaim the wheel for women. The character in that story finds the same kind of solace in escape’s solitude as any male character ever written as taking to the road to get away from the world. Both she and the mother in “Letting Go a Dream” are dealing with similar losses. The mother in the latter story is plugged into, informed by, the clichés of old. That’s why the Fairlane is treated as sacred. It is her son’s connection to the boring, the clichéd, the American dream. It represents a son less remarkable than the one in jail.

It was no challenge at all to include women in this collection. Both of these women are contemplating specifically male losses. These women exist in the Old-come-New West. In speaking of Old West, my mind is taken to country music. These are the good-hearted women loving good-timing men; they are Kitty Wells singing “It Wasn’t God Who Made Honky-Tonk Angels.” Kitty Wells’ song in particular represents what I hope to do with female characters in these settings. It speaks to Old West tropes of masculinity as being self-serving and destructive.

Without ruining any of the surprises, can you speak to your affinity to the surprise ending? There are at least three that caught me off guard (but in a satisfying way): “Curses by Numbers,” “Remember, Before You Go,” and even “Pawelekville” to a degree. The revelations at the story’s closing don’t null whatever came before, but in fact, add a startling dimension to the characters. What literary works were influences in this kind of narrative structure?

I can’t really say I have any affinity for surprise endings. I will say that once I get an idea, a seed of inspiration—a line, a theme, a character, a situation—I almost instantly know where a story will go. I almost work backwards in that regard. I am not often surprised by the end result of any story I am writing. I don’t take journeys with my characters, as I know some writers do. Even if I’m working on something longer, I always have mapped out in my head, from the start of a project, the trajectory of a story. Perhaps it’s knowing where I am going that leads me, in the writing of a story, to play with misdirection. I can’t name any literary influences on my tendency, if it can be called that, toward writing endings like I do. If I had to think of anything that did influence that, it would be the copious amounts of TV and, even more so, movies I consumed in my adolescence.

The expectation for any author who debuts with a story collection is that he/she will “graduate” into the writing of a novel, as if story-writing were any easier. I am curious about what you are working on now and whether you will continue to inhabit the same Texas landscape or if, like a few of your characters in Along These Highways, you are only dreaming of driving to other places only to find yourself back at home? If you are indeed working on a novel, what has been your experience so far after having dedicated an entire book to the compressed form?

While I don’t feel like I’ve graduated to any higher state of writerly being, after Along These Highways I have shifted to novel writing. In the time it took the collection to be published, I started and finished a novel, and I have since started another. This isn’t to say that I have given up on the short story. I am still writing stories. The process of writing a story, diving in and not coming up for air until I’ve hammered out a finished piece (sometimes over days, sometimes weeks), has been a great help to calm me when I’m hip-deep in a novel whose end seems miles away.

The first novel I wrote is set in Greenton. It focuses dually on the whole town and on one character in particular, a high school student. Maybe I’m officially at a safe enough distance from that time so that I can have written a whole novel around a young character. Still, though, like the aforementioned characters, this one is dealing with adult situations. The novel I’m currently working on is set in Corpus Christi. I could never leave South Texas behind. As I mentioned of initially writing mature characters when I wanted to see myself as mature, I think I wrote characters that were yearning to break free, to move on and up and away from their corners of the world, of Texas. Now that I am away, I am an adult, I do have the agency and mobility and freedom, I am okay to go back home, to stay home, narratively speaking. These are the only places I know, really, them and Austin. I love them. They are me.