Each day leading up to the March 8 announcement of the 2011 NBCC award winners, Critical Mass highlights one of the thirty finalists. Today, in #18 in our series, NBCC board member Marcela Valdes considers Mary Gabriel's “Love and Capital: Karl and Jenny Marx and the Birth of a Revolution” (Little, Brown). 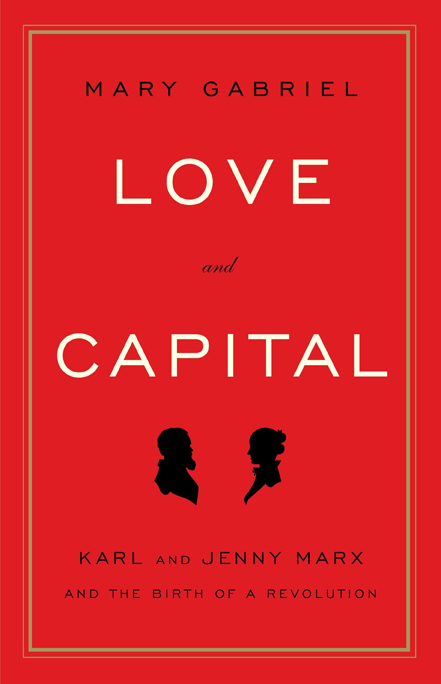 The founder of modern socialism. The godfather of communism. The champion of the working man. The red terrorist agitator. Of all the images and phrases that spring to mind when one hears the words “Karl Marx,” one rarely appears: the philosopher in love. Yet as Mary Gabriel proves in her exquisite biography, “Love & Capital: Karl and
Jenny Marx and the Birth of a Revolution,” the man who transformed history may never have done so if he hadn’t loved and married Jenny von Westphalen.

“From the earliest days of their marriage,” Gabriel writes, “he regarded Jenny as an intellectual equal, and that was no mere token sentiment… Indeed, throughout his life Marx held only one other person in a position of such high esteem and trust, and that was his alter ego and collaborator, Friedrich Engels.”

Marx met this brilliant baron’s daughter as a teenager in Prussia during the 1830s. They fell in love over the poetry of the Romantics and the utopian philosophies of the French. Together, they survived poverty and persecution in four countries and the deaths of three of their children. By 1861, Gabriel notes, their “family’s plight had been so bad for so long that… financial free fall was a way of life.They grew apart and, eventually, drew together again as their fortunes
rose and fell, for better and for worse. Beautiful and substantial, Gabriel’s biography traces not only these
domestic revolutions, but also Marx’s intellectual reconstruction. The Romantic teenager, she shows, began as a moderate liberal. He was radicalized by experience: first, by the Prussian government’s fierce repression of even mild reformers and, later, by the dismal working conditions he witnessed in industrial England — the same conditions,
incidentally, that inspired Charles Dickens.

The personal, the political, the philosophical: Gabriel weaves these threads into a remarkable tapestry. She resists the temptation to portray Marx as either a saint or a demon, revealing him to be a deeply flawed husband, a self-defeating writer, and man who needed significant help — from his wife, Jenny; from his daughters, Jennychen, Laura, and Eleanor; and from his best friend, Friedrich —to realize his ideals. The result is a triumph: a book that scrubs a legend clean of ideology renders him human again.

Interview on BookTv's “After Words.”