Each day leading up to the March 8 announcement of the 2011 NBCC award winners, Critical Mass highlights one of the thirty finalists. Today, in #17 of our series, a critcism finalist, David Bellos' Is That a Fish in Your Ear?: Translation and the Meaning of Everything (Faber & Faber), reviewed here by NBCC board member Carlin Romano. This year, the NBCC has partnered with websites to promote our finalists. To read David Ulin on Ellen Willis's “Out of the Vinyl Deeps” (University of Minnesota Press), #20 in our 30  Books in 30 Days series, click here. To read Mark Athitakis on Dubravka Ugresic's “Karaoke Culture” (Open Letter),#21 in the series, click here. 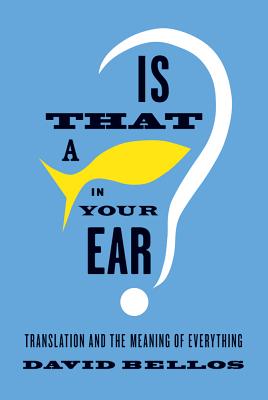 Who will translate this feat of philosophical and linguistic derring-do after it wins its many deserved prizes? Who will dare?

Answer: Any sophisticated translator, for David Bellos–stellar channeler of Kadare and Perec and director of the Program in Translation and Intercultural Communication at Princeton University—reveals himself here as an inspired spokesman for the real world of translation in its many historical and contemporary forms. Bellos, like Umberto Eco with his The Name of the Rose and other works, will doubtless bless many versions in many tongues because he knows, counter to the cliché of folk wisdom that reportedly prodded him into this project, that translations are indeed “substitutes” for their originals–“matches” for them rather than “equivalents”–and thank God that they are.

A literary critic can’t help loving translators–their cosmopolitan savvy, their devotion to detail, their selfless (and poorly remunerated) toil, their occasional flashes of ego. (Oh, the private pleasure, years ago, to hear William Weaver confide that Ray Rosenthal got every translation from Italian that Weaver turned down, and then to hear Rosenthal claim exactly the opposite!) Above all, one loves their canniness and common sense about language. Bellos’s shrewd observations remind one of a lovely Weaver riff years ago in a Paris Review interview:

“Some of the hardest things to translate into English from Italian,” recalled Weaver, “are not great big words, such as you find in Eco, but perfectly simple things, 'buon giorno' for instance. How to translate that? We don't say 'good day,' except in Australia. It has to be translated 'good morning' or 'good evening' or 'good afternoon' or 'hello.' You have to know not only the time of day the scene is taking place, but also in which part of Italy it's taking place, because in some places they start saying 'buona sera' ('good evening') at 1:00 P.M. The minute they get up from the luncheon table it's evening for them. So someone could say 'buona sera,' but you can't translate it as 'good evening' because the scene is taking place at 3:00 P.M. You need to know the language but, even more, the life of the country.”

Bellos anatomizes translation with just that grasp of lived reality, but also, scholar that he is, with a mastery of the practice in an unpredictable variety of settings. In his punchy 32 chapters, he explores an astounding array of practical and theoretical matters. The former include simultaneous interpreting, the dominance of English as an “interlanguage,”  the concept of technical expertise, the challenges of translating appliance manuals,  the phenomenon of the polyglot, automatic-translation machines, translation myths (“what gets lost in translation”), even  the humble film subtitle. The latter topics involve some of the profoundest issues in translation: the idea of the ineffable, the possibility of “literal” translation, the notion of the “foreign-sounding,” the communicability of “style,” the meaning of “meaning” itself.

Over the years, we’ve been fortunate to welcome fine meditations on translation from superb practitioners such as Gregory Rabassa and Edith Grossman, and provocative critical works of translation theory from scholars such as Lawrence Venuti–like Bellos, both a  literary translator and theoretician. But for deft combination of bold examples, entertaining detail, droll style and confident insight, Is That a Fish in Your Ear? stands out as the most thought-provoking critical work on translation of recent years, a text that should be piped through headsets worldwide.

For years, our sainted organization (NBCC) has debated whether we ought to establish a separate prize for translation. If  Is That a Fish in Your Ear? achieves nothing else, it ought to convince us that we’re long overdue in honoring one of the central literary activities of world culture, an enterprise that, as Bellos concludes, “more than speech itself…provides incontrovertible evidence of the human capacity to think and to communicate thought.”