Each day leading up to the March 8 announcement of the 2011 NBCC award winners, Critical Mass highlights one of the thirty finalists. Today, in #19 in our series, NBCC board member Karen Long reviews autobiography finalist Diane Ackerman's “One Hundred Names for Love” (Norton). 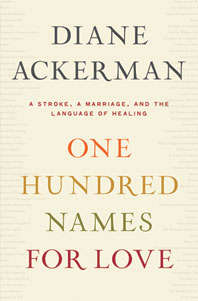 The subtitle of Diane Ackerman’s bracing work seems ominous — “A Stroke, A Marriage, and The Language of Healing.” In a culture besotted with books aspiring to inspire, no one should mistake “One Hundred Names for Love” with the mountainous heap of reductive self-help titles.

Ackerman, author of the excellent “A Natural History of the Senses” and the suspenseful nonfiction “The Zookeeper’s Wife,” now turns to the 2005 stroke that felled her husband, Paul West. Once a robust British Royal Air Force officer, West went in a few minutes from the accomplished writer of 51 books to a man who couldn’t read, who could stutter only the syllable “mem.”

Ackerman’s exemplary book beckons us to take a long dive into the twilight of stroke, an affliction survived by 5 million to 6 million Americans, and the leading cause of disability among adults in the United States.

One reason to submit is the beauty of the opening paragraph. In it, West, is trailing plastic tubes in dim light, hospitalized for an infection:
“I was struck by how the body sometimes looks like the sea creature it is, a jellyfish with long tentacles, not really a fish at all but a gelatinous animal full of hidden symmetries, as well as lagoons and sewers, and lots of spongy and stringy bits. Mainly salt water. Lugging tubes and cables, he had joined the hospital's bloom of deep-sea creatures.”

West turned out to be “a fractious, infuriating patient.” He was also eccentric, diabetic and 18 years older than his wife. Ackerman's father owned a McDonald's restaurant in Allentown, Pa. The pair met in West's literature class at Penn State.

“Who can say why two people become a couple, that small principality of mutual protection and regard?” she asks. “Couples are like jigsaw puzzles that hang together by touching in just enough points.”
The stroke damaged West so extensively that a doctor reading a fresh brain scan several years later assumed he was “in a vegetative state.”

Indeed, the early months were dreadful: West – who “had a draper's touch for the unfolding fabric of a sentence,” who “collected words like rare buttons” – lost his ability to speak, to write, to understand what was said.

“One Hundred Names for Love” chronicles his slow return, clawing his way out of the terror of being sealed inside his own addled head. His wife, author of “An Alchemy of the Mind,” knew a bit about left-brain injury. Famed neurologist Oliver Sacks made a house call and gave indispensable advice.

Ackerman describes herself as “tired as wet sand” and “picked over by the gulls of worry.” She has a poet’s touch with a phrase, and makes this book a sharp, compelling tale. Her writing about neurology is particularly strong — she notes that “because brains are wadded up tight like too many clothes jammed in a gym bag, everyone’s brain looks a little different in its shape and pattern of folding.”

“One Hundred Names for Love” also paints a portrait of an unorthodox and enduring marriage. Ackerman can be a bit deaf to her class privilege, but on pages 155-156, she squares up to her remade world and its consequences— “what to make of a diminished thing?” — so movingly that it hollowed out my chest.

A Zen Buddhist, Ackerman doesn't dwell on faith. But her mindfulness when her husband lost his mind made all the difference. And a splendid book.