Each day leading up to the March 8 announcement of the 2011 NBCC award winners, Critical Mass highlights one of the thirty finalists. Today, in #12 of our series,NBCC board member Karen Long considers nonfiction finalist James Gleick's “The Information” (Pantheon). 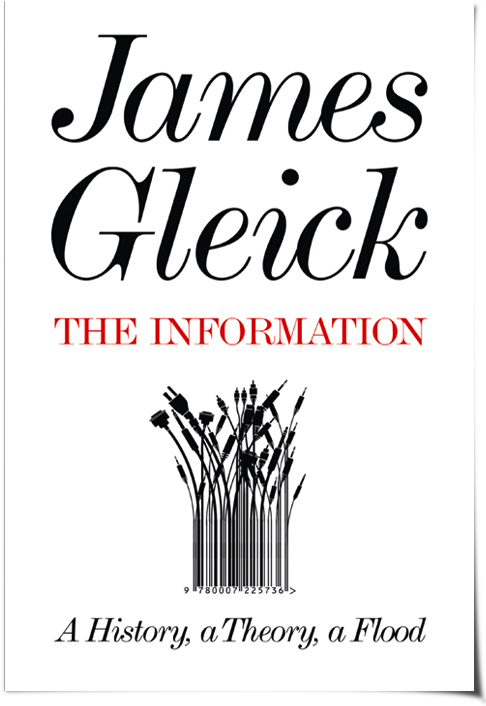 Nobody is neutral about the tsunami of information currently washing over our lives. In James Gleick’s fascinating book, readers learn that we aren’t remotely the first people to feel besieged.

In 1845, less than a year after both the United States and England had strung their first experimental telegraph lines, a London druggist named John Tawell poisoned his mistress and ran for the train at Paddington station.  Gleick writes:

“A telegraph message outraced him with his description ('in the garb of a kwaker, with a brown great coat on' – no Qs in the English system); he was captured in London and hanged in March. The drama filled the newspapers for months. It was later said of the telegraph wires, 'Them's the cords that hung John Tawell.' ”

With characteristic zest, Gleick plucks this anecdote for his loose-limbed, challenging and important book, “The Information.” He spends a surprising amount of space on the now-dead telegraph and the transformation it sparked during the 19th century, clicking along vigorously in Morse code.

Gleick argues that the telegraph regulated our modern concept of time, gave us weather forecasting and provoked a disquieting, strong sensation that everyone was talking and no one was listening.

Such déjà vu is an overarching element in Gleick’s ambitious history of information. “Every new medium transforms the nature of human thought,” he writes. “In the long run, history is the story of information becoming aware of itself.”

So the author swings back to consider very early forms of messaging and storage, from the alphabet to flag signals to dictionaries, and forward to our era, in which Google’s Eric Schmidt asserted that “Every two days now we create as much information as we did from the dawn of civilization up until 2003.”

This scope is intoxicating — thanks to Gleick's clear mind, magpie-styled research and explanatory verve. He salts his book with numerical charts and odd sketches, long codes and cuneiform tablets, musical notation and a smattering of polynomial equations. Readers must strap on their thinking caps.

The author's first book, “Chaos,” explained a new scientific field in 1988 and became a classic, translated into 25 languages. It introduced the concept of the Butterfly Effect into popular culture.  Both of Gleick’s physics biographies, of Richard Feynman and Isaac Newton, were finalists for the Pulitzer Prize.

Newton and Feynman reappear in “The Information.” As Gleick notes, “the new discipline of physics could not proceed until Isaac Newton appropriated words that were ancient and vague – force, mass, motion, and even time – and gave them new meanings. Newton made these terms into quantities, suitable for use in mathematical formulas.”

The quirky individual who pulled off this stunning, theoretical accomplishment in information science was Claude Shannon, a quiet, gawky tinkerer from rural Michigan. As a boy, he converted a barbed-wire fence near his home into a homespun telegraph, exchanging coded messages with a friend a half mile away.

Working for Bell Labs, Shannon coined the notion of “bits” for “binary digit” in his 1948 paper, “A Mathematical Theory of Communication.” It published just as his employer unveiled the hardware that would harness Shannon's concepts — the electron semiconductor, which, of course, has revolutionized our lives.

Shannon serves as the opener for “The Information,” elegantly subtitled “A History, A Theory, A Flood.” Gleick has no peer in helping the general reader grasp the tide, starting with a tour-de-force chapter on communication via African drumming.  He covers Bertrand Russell's “Principia Mathematica,” Kurt Godel's incompleteness theorem and Werner Heisenberg's uncertainty principle.

Also appearing is Charles Babbage, the Englishman who designed an analytical engine that worked as a precursor to the computer. Nor does Gleick forget Ada Lovelace, who labored beside Babbage and pioneered the idea of the software algorithm. Superb in lassoing math and physics, Gleick stumbles a notch with biology, swallowing whole the rhetoric of “The Selfish Gene” and its progenitor, Richard Dawkins.

In tone, Gleick is no alarmist. David Foster Wallace may have called the flood of contemporary information “Total Noise,” but Gleick does not seem to fear the cacophony drowning out the distinction between false and true.

To be human is to look for meaning, to search, to filter, to collate. “Information is not knowledge, and knowledge is not wisdom,” he writes. “Reading – even browsing – an old book can yield sustenance denied by a database search. Patience is a virtue, gluttony a sin.”

Gleick invites readers to see how the foundation is laid.

Interview in the Economist