Each day leading up to the March 8 announcement of the 2011 NBCC award winners, Critical Mass highlights one of the thirty finalists. Today, in #9 of our series, NBCC president Eric Banks considers nonfiction finalist Maya Jasanoff's “:Liberty's Exiles.” 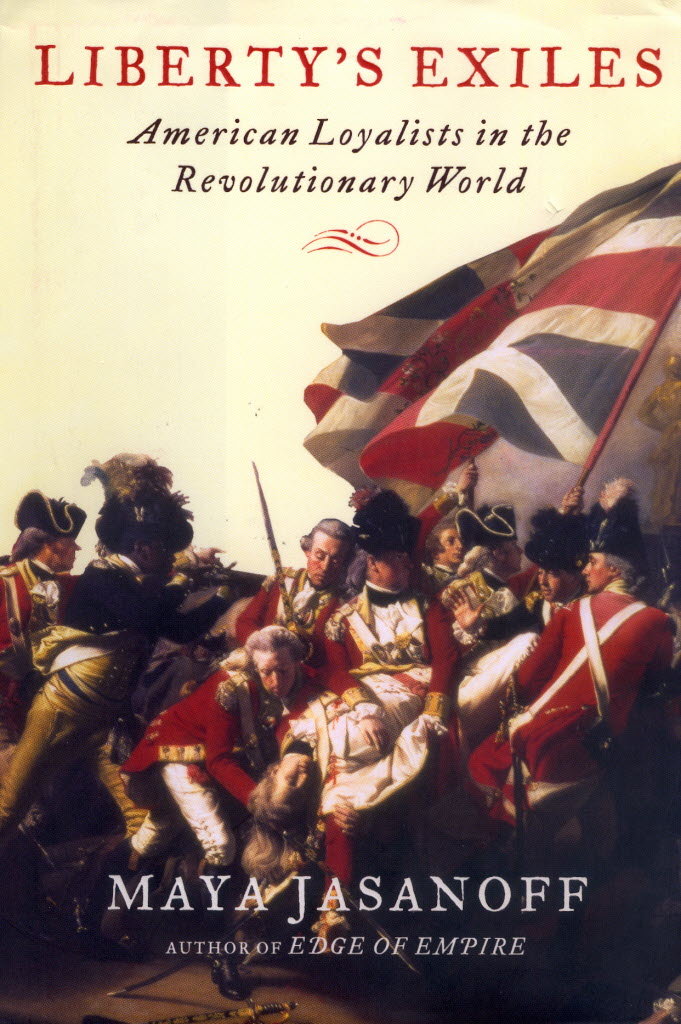 For a war that gave birth to a nation and continues to fuel the don’t-tread-on-me imagery of political life today, most readers south of the Canadian border know next to nothing about the fate of those colonial partisans on the losing side of the American Revolution. It’s not entirely their fault: there is comparatively little written about those who remained loyal to the crown after Lexington and Concord and who faced retribution and dispossession following Cornwallis’s surrender at Yorktown. Part of the brilliance of Harvard historian Maya Jasanoff’s Liberty’s Exiles: American Loyalists in the Revolutionary War, is to portray this story of the colonial vanquished as an unprecedented humanitarian crisis, a global game-changer that created a diaspora of 60,000 refugees in search of safe havens throughout the British Atlantic empire, in Britain itself, along the inhospitable shores of western Africa, and even in India and Australia. In the process, this crisis precipitated lasting reverberations for how Britain would come to see its own imperial enterprise. It would crystallize the distinctions between authoritarian rule and liberal creed, between “citizens” and “subjects,” rights and promises of protection. For the British, Jasanoff argues, the “spirit of ‘76” was answered by the no less watershed “spirit of 1783”: a signpost that reshaped the very notion of empire, a post-revolutionary response that required wholesale rethinking of authority, liberty, and the empire’s subsequent global reach.

Liberty’s Exiles is a vast reconsideration of the global effects of the American Revolution humbly smuggled into a concise, splendidly written book, an exemplary work of gumshoe research into the lives of loyalists with an eye on larger historical patterns. Whatever preconceptions we might hold about who these loyalists were, Jasanoff demolishes them early on: certainly, their numbers included a small Tory elite—conservative, moneyed Anglicans umbilically tied to Britain. But loyalism, she shows, sliced across every socio-economic distinction of colonial life, “making loyalists every bit as ‘American’ as their patriot fellow subjects.” Their numbers critically included some twenty thousand former slaves who answered the British offer of freedom in exchange for military service. (Jasanoff characterizes the martial manumission as the most sweeping emancipation before Lincoln’s.) It included Creeks and Mohawks, who threw their lot in with the English rather than the Americans and became part of the northern- and southern-bound diasporas. It comprised New York cobblers and bakers, New England missionaries, and South Carolina and Georgia plantation owners whose exodus entailed the movement of another 15,000 slaves to Nova Scotia, Jamaica, and the Bahamas. It included women and men, free and enslaved, from all walks of colonial life.

It’s one credit to the felicity and panache with which Jasanoff relays the contours of these lives that Liberty’s Exiles contains historical story-telling of a literary caliber. Her cast includes the remarkable Baptist preacher David George, born a slave in Virginia, exiled north to Birchtown, the Nova Scotia hamlet populated with newly freed black subjects, and finally a pioneer of the first African repatriation scheme in Sierra Leone. It brings into focus charismatic visionaries like Joseph Brant, the Mohawk leader who carved out an indigenous space for his nation in the British-held north, and the Byronic gone-native William Augustus Bowles, whose quixotic efforts to establish an autonomous Creek settlement in Florida took him to London, New Orleans, notorious Spanish prisons in Havana and Panama, and Sierra Leone. The stories of George, Brant, and Bowles, like that of William Franklin, the loathed loyalist son of Ben, have been told before, but rarely have they been narrated with such care and insight as part of the larger story of how so many different experiences shaped the world after 1783. Nor have they shared such capacious space with other, less sensational lives—those who were sent off to Halifax and Nassau and London to transform overnight and on the ground the suppositions of imperial government, property rights, and the émigré experience. A glance at the notes to each chapter of Liberty’s Exiles gives a glimpse of the yeoman’s archival work that went into reconstructing these loyalist lives.

Yet what makes Liberty’s Exiles a remarkable work of history is how skillfully Jasanoff synthesizes these frequently forgotten peregrinations within an overarching view of the history of empire. Everywhere the dispossessed wound up, they challenged land-use patterns and ideas of colonial governance. Their often disputatious presence in what would become Canada helped establish the multi-ethnic liberal imperial culture that subsequently shaped the country’s political identity and that further served as a model for British governance of India and elsewhere. Their arrival in the British West Indies brought to a fore the issues of race and slavery. Most provocatively, their return to Britain forced Westminster for the first time to establish a commission to adjudicate a host of questions about its responsibilities to its subjects—both monetary and moral—and fired the arguments of abolitionists and the visions of an empire that promised liberal rule in exchange for loyalty. For a Britain that soon saw itself competing globally against a more radical French notion of liberté, the “spirit of 1783” imbued the architects of the notion of empire with a moral purpose that required and received renewed articulation. With outstanding clarity, Liberty’s Exiles makes a compelling case that, in losing their colonial battles, the loyalists of America achieved their own versions of success, not the least of which would be to reshape the picture of British rule.