Each day leading up to the March 8 announcement of the 2011 NBCC award winners, Critical Mass highlights one of the thirty finalists. Today, in #7 of our series, NBCC board member David L. Ulin discusses fiction finalist Dana Spiotta's “Stone Arabia' (Scribner). 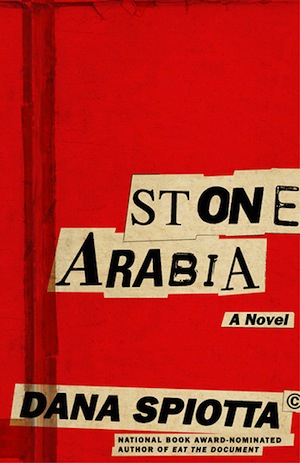 Dana Spiotta’s “Stone Arabia,” asks a couple of essential questions: Who are we? And what is the relationship between our most private longings and the face we show the world? It is a novel of memory, of identity, of the tenuous bonds of family, a book that looks hard at the fragility of everything we hold close. The story of Nik Worth, a former rock ’n’ roll wunderkind who dropped out early yet continues to make the most private music, it is also a novel of obsession — although whose obsession is not always clear. There’s Nik; his sister Denise, who narrates much of the book; and their mother, a septuagenarian in the middle stages of dementia. “Pay attention to this,” Denise reminds herself as she embraces the older woman. “Hug tight, this could be one of the last hugs.”

Like his mother, Nik, too, relies on Denise. For 25 years, he has been making records on a four-track, creating covers and label art, and sending them to his sister and some friends. At the same time, he has developed a self-referential narrative called the Chronicles: dozens of scrapbooks filled with clippings, articles, reviews. That none of these artifacts are, strictly speaking, real is beside the point — or, more accurately, it is the point, the point at which fantasy and reality merge. These, after all, are the terms of Spiotta’s narrative: that we all chronicle our years in minute-but-twisted detail, rendering and re-rendering our experience until we can get it to cohere. Nik is not delusional — he knows the difference between reality and fantasy. And yet, just look at his reality: middle-aged, awash in booze, cigarettes and other substances, still possessed of a younger man’s charm but seeing it begin to fade. He works as a bartender, has lived in the same studio apartment for more than 20 years. Against such a backdrop, it’s no leap to suggest that his life as a fantasy rock star is the very thing that keeps him sane.

If nothing else, this makes for a sharp character study: A portrait of the artist as middle-aged never-was. Yet Spiotta’s genius is to recognize that Nik’s journey is representative, not just for his sister or his mother, but for every one of us. The issue is authenticity, which in this society, saturated with images and trivia, becomes perhaps the most elusive grail. In such a world, imagination is — has to be — the driving force, and if Spiotta’s too smart to suggest that it might save us, she does see it as a source of futile reverence.

In the end, “Stone Arabia” is about this form of purity, the idea that life and meaning are what we make of them, even (or especially) when the connections have broken down. “It wasn’t fake; it was real,” Nik explains. “Imagine being freed from sense and only have to pursue pure sound.”