Each day leading up to the March 8 announcement of the 2011 NBCC award winners, Critical Mass highlights one of the thirty finalists. Today, in #6 of the series, NBCC board member Benjamin Moser reviews nonfiction finalist “A World on Fire: Britain's Crucial Role in the American Civil War” by Amanda Foreman (Random House) 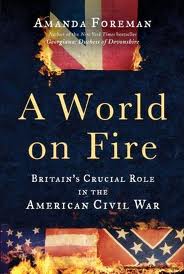 Two images stay with me from Amanda Foreman’s “A World on Fire.”

The first is of a soldier wandering across a battlefield. One of his eyes has been entirely blown out. The other, loosed from its socket, hangs lifelessly over his cheek.

The second is of the muscular Foreman herself, putting many a lazier writer to shame by writing a nearly thousand-page history of the Civil War while—I can’t avoid pointing it out—raising five children. In those circumstances, a tedious chronology would have been a feat. That she has produced one of the most moving and inspired works of history in recent memory is a nothing short of a triumph.

The subject of British involvement in the American Civil War may seem tangential to the main story of the fight between the Union and the Confederacy, but there were no fewer than three million British subjects in the United States when war broke out, nearly ten percent of the population, and their homeland occupied a uniquely powerful position in American life. Unlike most immigrant populations, the British (and Irish) came from the world’s greatest superpower.

Though that superpower was the mother country, it was loathed: even Britain’s best intentions were so violently misconstrued that the two countries nearly went to war. In Foreman’s book, it often seems amazing that they didn’t.

It is true today that Britain is more than England, but that was far more true in 1861. Because Canada was not independent, Britain and America shared a long and volatile border; and the British territories of Bermuda and the Bahamas, through which the Confederacy was largely provisioned, were essential to both sides.

The nations’ economies were as intertwined as their populations. The entire British textile industry, which employed tens of thousands, depended on Southern cotton, and many Southerners believed that this alone would force Britain to recognize the Confederacy.

That it did not, Foreman shows, was something of a surprise. If Southern slavery was repulsive to the British, recurring and hysterical Northern expressions of anti-British sentiment hardly helped the Union cause. And Lincoln and Seward’s initial reluctance to make the war “about slavery” alienated many potential supporters, costing points in the fierce but essential propaganda war raging in the British press.

For Americans today, it may be hard to imagine just how much their ancestors cared about what the British press wrote about them. Now as then, the superpower cares little how it is portrayed in the colonies. But the colonies care deeply how they are portrayed in the superpower: William Howard Russell, the Times’s correspondent in Washington, was all but hounded out of the country.

Thanks to politicians and diplomats who were—for once—wiser than their populations, Britain and America never drowned in this deep reservoir of ill-will. Foreman’s affection lies with those who rose above the passions of the day to prevent the greater catastrophe of an international war.

These quiet heroes are among the many now-forgotten figures whose thoughts and actions were essential to the course of the war, and there are many of them in Foreman’s book: I confess that my heart sank when I saw the thirteen-page list of dramatis personae at the beginning of the book. But perhaps the best testament to Foreman’s narrative skill is that I never once had to consult it.

At the end, looking back over this long list of Federals, Confederates, and Englishmen, I saw that Foreman, rather than narrowing the story of the Civil War to an obscure chapter in diplomatic history, has instead broadened it to include the whole of the North Atlantic world.

Under the cover of a history of Anglo-American relations during the Civil War, she has managed to smuggle in an entirely new history of that war, following the armies from battle to horrifying battle, showing in nauseating detail the price paid for Union and Emancipation.

It is an old story, one that must be retold in every generation. That a writer of Amanda Foreman’s intellect and compassion has done it in ours is a great good fortune.