Recently we asked NBCC members, former awards winners and finalists, What’s your favorite book about work? The responses to this NBCC Reads series poured in (a few within minutes). Books ranged all over the map. Several books gathered multiple endorsements, including Philip Levine's “What Work Is,” Ed Park's “Personal Days,” Tom Rachman's “The Imperfectionists,” “Two-Up” by NBCC board member Eric Miles Williamson, George Orwell's “Down and Out in Paris and London.”  The long tail of individual favorites began with NBCC Balakian award winner Joan Acocella's pick, Penelope Fitzgerald's “Human Voices.”Today's entry is from NBCC member and Bookslut columnist Kerri Arsenault. 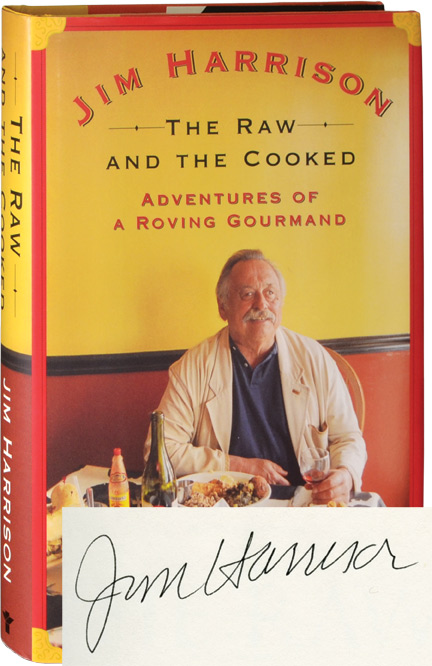 Work can kill you. Nobody understands this more than Jim Harrison. Eat or die, his self-avowed motto, is ideal for a man who infamously tucked into a colossal multi-course meal with Orson Welles at Ma Maison only to top it off with a street cart hotdog. Eating, cooking, and writing—pastimes I also enjoy—collide in Harrison’s collection of previously published food essays, The Raw and the Cooked: Adventures of a Roving Gourmand.The Raw and the Cooked: Adventures of a Roving Gourmand. His writing, eating, and cooking scale the precipice of the divine and he should be revered for all, for they go beyond mere sustenance in their respective categories. A “multiple entrée kind of guy”, Harrison shared 19 duck legs with Guy de la Valdene; prepared “roasted doves and quail with a fois gras sauce; a small wild pig with a garlic fruit sauce with a roast teal for a starter; and some grilled barnyard chickens with a paste of garlic and rosemary added late in the cooking and with an appetizer of stone-crab claws” alongside “collard, mustard, and turnip greens, plus dozens of vegetables…and a couple of cases of good northern Italian wine” and after a visit to his therapist ate “a quick boiled pig hock, then on to the Papaya King hot-dog stand…for a quick frank with sauerkraut and mustard, down Third to Ray’s for a slice of pizza with eggplant, then over to JG Melon for a simple rare burger and a double V.O.”. His epic meals, however, belie the delicacy of his poetic prowess.

“Eat or Die” is also the first chapter in The Raw and the Cooked, where Harrison’s opines, “many of our failures in politics, art, and domestic life come from our failure to eat vividly….” Of these debacles, Harrison cannot be accused. For he has lived a life well-done and done it well.