Recently we asked NBCC members, former awards winners and finalists, What’s your favorite book about work? The responses to this NBCC Reads series poured in (a few within minutes). Books ranged all over the map. Several books gathered multiple endorsements, including Philip Levine's “What Work Is,” Ed Park's “Personal Days,” Tom Rachman's “The Imperfectionists,” “Two-Up” by NBCC board member Eric Miles Williamson, George Orwell's “Down and Out in Paris and London.”  The long tail of individual favorites began with NBCC Balakian award winner Joan Acocella's pick, Penelope Fitzgerald's “Human Voices.” Today's entry is from NBCC member David Abrams, who blogs about books at The Quivering Pen. 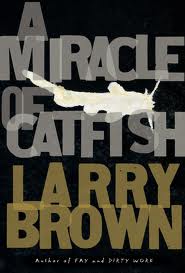 When we think about how the notion of “work” is portrayed in fiction, we probably go immediately to the tried and true: policeman, fireman, butcher, baker, candlestick maker.  Fueled by everything from the early readers of Richard Scarry to the latest Dilbert cartoon, labor in literature nearly always goes for the high-profile jobs.

But whoever thinks of a catfish farmer?

Larry Brown did and the result is a wonderful portrait of the modern working man in A Miracle of Catfish, Brown's posthumous novel published in 2007.  Tommy Bright is a down-on-his-luck owner of a fish-stocking business who, in the course of the novel, secretly slips a giant catfish named Ursula into 72-year-old Cortez Sharp's newly-dug pond.  A Miracle of Catfish is filled with more than a dozen memorable characters, but I particularly enjoyed the scenes involving Tommy and his big red truck compartmentalized with tanks holding crappie, largemouth bass, bluegills, and bream.

Brown takes pleasure in compiling the everyday minutiae of life. If you're the kind of reader who doesn't want to spend a whole chapter watching a man slowly filling a pond with buckets of fingerlings (“the water came flowing out in a wide tongue and the little catfish came swimming with it”), then this is probably not the book for you. The author takes his time, painting his huge mural with tiny brushstrokes.

Here is just one moment from Tommy's life when he's working late at his office out in the barn, agonizing over bills, balancing the books, and fretting over supplies needed to keep his fish alive:

He was too old to start over.  He was fifty-seven.  He ought to be thinking about retiring instead of all this bullshit.  Hell.  A man got old and tired.  He got tired of the things that happened to him on his job.  He'd lost count of the times he'd been finned by catfish, but he remembered the worst ones.  The one that got him all the way through the thumb that day in Hot Springs.  The one he stepped on that day in Batesville, Mississippi, and drove the fin up under his big toenail.  He had very nearly shit on himself for real when that one happened.  But hell.  Everybody had something on their job to worry about.  Firemen risked getting burned up.  Ironworkers had to deal with the reality of falling to their deaths.  Getting finned was a part of Tommy's life.  You just tried to minimize it as much as you could.  It helped to wear leather gloves.

Let us now praise the overlooked and overworked fish farmers of the world.