Recently we asked NBCC members, former awards winners and finalists, What’s your favorite book about work? The responses to this NBCC Reads series poured in (a few within minutes). Books ranged all over the map. Several books gathered multiple endorsements, including Philip Levine's “What Work Is,” Ed Park's “Personal Days”, Tom Rachman's “The Imperfectionists,” “Two-Up” by NBCC board member Eric Miles Williamson, George Orwell's “Down and Out in Paris and London.”  The long tail of individual favorites began with NBCC Balakian award winner Joan Acocella's pick, Penelope Fitzgerald's “Human Voices.” Today's entry is from NBCC member Russell Valentino, professor of cinema and comparative literature at the University of Iowa, editor of The Iowa Review, and a participant in a 2009 NBCC Reads panel on works in translation at Prairies Lights in Iowa City (podcast here). 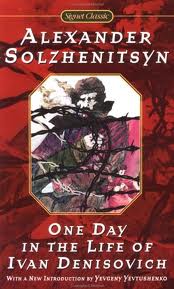 One novel that immediately comes to mind is Alexander Solzhenitsyn’s “A Day in the Life of Ivan Denisovich.” Not an American work, of course, and perhaps not one that others would associate on first glance with work per se – political prison, the Soviet camp system, yes, — but its relationship to work, especially when compared to Studs Turkle’s books, seems at best skewed, at worst simply grotesque.

Actually, I’m not quite sure why it is so clear in my mind as a first choice. Maybe it’s because Shukov, the main character, takes pride in his work despite the fact that it is something forced upon him, chosen by others, and performed under harsh conditions. There are guards watching, dogs ready to snap him back into place, and the natural world presses on him brutally from all sides. Yet he takes the time, extra time, to make sure the brick wall he is building is complete, even holding up the other prisoners from getting dinner in the process.

And it is just one relatively uneventful day out of thousands shared by a cohort of millions who worked constantly, a many of whom died in the process. The Soviet gulag  was a labor camp system, and the work performed by the millions of prisoners who passed through it is still visible in Russia, and remains part of the world economy in some cases, as the prisoners often worked in mines in the Far East. Ivan Denisovich gives a name, thoughts, memories to one of them, and a life experience to associate with their work.