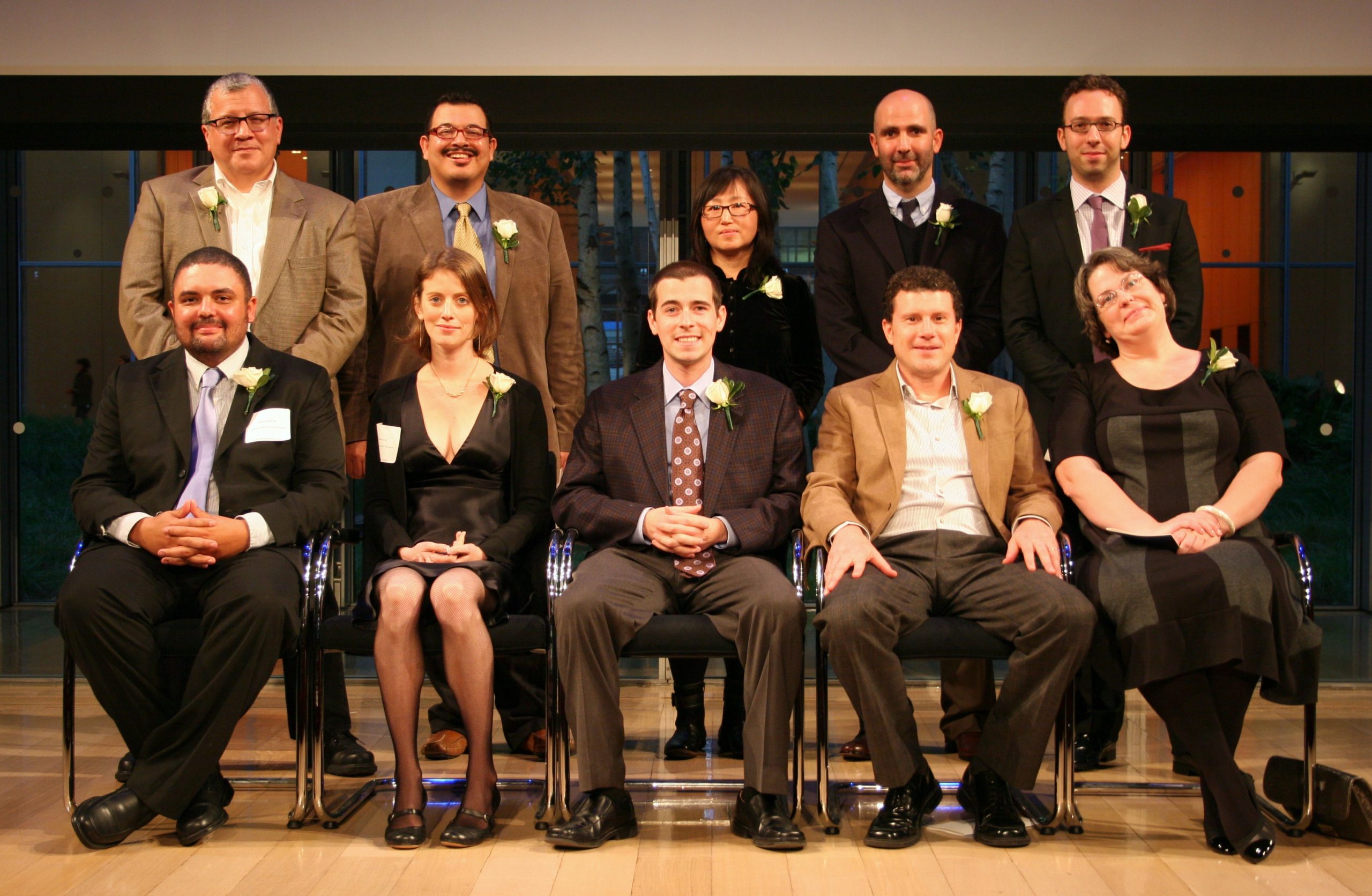 You’ve been selected for this award through a process both wide-ranging and rigorous. As you know, this is nothing you applied for; a national network of friends of the Foundation serve as nominators, and a hardworking group of anonymous judges, all highly accomplished writers, have read your poems, stories, novels, memoirs, essays and plays – have I left anything out? – and thought and discussed and argued about them. Many are called, as someone once said, but few are chosen. You’re here this evening because your voice, your art, your promise, have risen above the emerging writers of your time, and the Whiting Foundation tonight affirms, blesses, funds and cheers on your work. It doesn’t get much better. I know this because, in 1994, I was lucky enough to experience this evening from your side – a night that glows in memory still.Now, nearly twenty years later, I want to encourage you to savor this brilliant occasion of attention and celebration.

Because you’re going to need it.

A Nobel laureate has said, in a statement of praise for these prizes, “ The Whiting Awards are a wonderful antidote to self-doubt.” My immediate response is, well, good luck with that. If you’re at all like me, you’ll feel effervescent this evening, and lifted up by this experience for the next few days. In less than a week from tonight, when you think of this award you’ll feel brightened, and in between those high points, your uncertainties and doubts in your own capabilities, in the worth of your projects, in the value of what we do – well, I wish that the Trustees of the Whiting Foundation had the power to simply wave those things away by giving you a citation and a check.

Or maybe I don’t wish that, not really. If there were not moments when it seems no one is paying the least bit of attention to what you do, or days when it seems the world absolutely does not need another lyric poem, another novel of ideas, I suspect our work would be far the less for it. Rejection must be at least as much a part of of our education as affirmation is; here in the vale of soul-making, it seems very unlikely that we’ll experience one without the other. Tonight the world is kissing you on the cheek, and most likely you’ll receive a slap on the other shortly.

And therefore artists, even ones who receive recognition, are subject to a particularly corrosive sort of bitterness. This is a mysterious thing, but I suspect it’s because the stakes involved here are primarily those of honor, of beautiful intangibles. We want to feel heard, we want to touch others, we want to make something remarkable and perhaps in our secret wishes we want to make something that will outlive us. This wanting is so large that it’s hard to figure out where satisfaction resides; what will it require, for us to believe we’ve done something worthwhile? How can we believe that when every work of art is partial, and we always know that what we make can never be quite as perfect as the ideal words we’ve imagined, or thought we could almost hear on the air somewhere, the perfect work we try to get on the page but which always slips away. Surely that’s part of what Elizabeth Bishop meant when she let that famous fish go: we do our best to capture what it is to be sentient, but you can’t get it whole, something must always wriggle out of our grasp, and therefore everything we make is a little bit of a failure. Though some failures are very great ones.

In order to stay alive as artists, we need to resist the very human dangers of resentment and bitterness. Resentment comes from attending to the injuries and rejections of the past, or to fears of the future. These difficulties are exacerbated by loneliness, and of course writers are perpetually alone with their work, no matter how embedded they are in communities. For many years I thought I needed to write in my quiet study, in a corner of my house where I could get away from anyone except a dog, and I’d be a little annoyed when people walked by talking on the nearby street – how dare they interrupt my poem! After I moved to New York City I found myself not enjoying writing at home. I found a coffee shop congenial to writing (the location of which, as any urbanite would understand, I would never reveal). Soon I realized that in fact I liked having company. I liked some evidence of activity – milk steaming in the espresso machine, dishes rattling in the plastic bin where you’d put your empty coffee cup. These provided, as Frank O’Hara said about record stores, “some evidence that people do not entirely regret life.” They also put the work of the artist in perspective. There you are, laboring away over a line break or the placement of a comma, small dramas of the soul that can seem momentous indeed, and no one else in the room is at all concerned with you. They are at best benignly neutral. When I’d take the train uptown to teach a workshop at Columbia, I’d have the familiar experience of being as immersed as my students in the intensely absorbing process of trying to get a grip on a poem together. It wasn’t until I headed down the steps toward Broadway and the downtown train that I’d realize how large the poems had loomed to me. The instant you step out the gates of the University, it’s always just as Jean Valentine described Broadway: “I saw streaming up out of the sidewalk the homeless women and men/ the East side of Broadway fruit and flowers and bourbon.” The street flames with its indifferent life, gorgeous or terrible or both, depending on your spirits. The taxis swagger, the lights change, bodies stream in every direction, countless faces filled with their own private intentions, and what is a poem then? A little thing, which is probably as it should be; when you return to it, it will be large again , but a city is a fountain of perspective. Mark Halliday puts it wonderfully in a poem called “Seventh Avenue,” when the street suddenly rears up, a great collective embodiment of ongoingness, and speaks to the  separate citizens walking there. “You want?” the street says, “how does it feel to want?”

But we artists — and I will go even further out on this limb and suggest that particularly we writers – know what it is to want. Marie Howe’s poem “What the Living Do” focuses on one of our central activities: “We want more and more and more of it/ whatever it is.” Writers want to fit the world into words; we want to fit the world into our mouths. We seem to have an impossible longing for contact, impossible not only because of the boundaries of our separate skins but because of the fundamental inadequacy of the material we use for making connections: the ephemeral, airy, malleable stuff of language. Your taxi driver may or may not have read Derrida, you can bet that he or she understands quite clearly that there’s a gap between the word and the thing it represents, and that our words never quite succeed in making our experience available to who’s listening, and maybe they’re not listening anyway. It’s hard not to envy painters their wet oily muck, or sculptors the heft of bronze. They in turn envy the immateriality of what we do, but the airy nothing of words is both infinitely liberating and maddening. It underscores our loneliness.

And upon that strange foundation we build much of our sense of self; if words are your given medium, then they are how you know yourself in relation to the world. I hear, when people are asked why they write, a range of answers: to speak back to the world so that you are not entirely overwhelmed by what Wallace Stevens called “the pressure of reality.” To bear witnesss. To “bring forth what is inside of you,” as the Gnostic gospel of St Thomas puts it, so that “what is inside of you will save you.” To keep from disappearing. To gain power over language, when one feels little power over anything else. Because someone – a teacher or a librarian or someone who loved this art – read you a poem, or put a novel in your hands, and somehow a door opened where you hadn’t known one existed, and you fell in love. Because you feel empty if you don’t. In order to feel heard, in order to assuage the persistent ache of loneliness.

There will be desolation in any writer’s life, it will be helpful to hold onto the memory of tonight, when we collectively lift to you a big flute of champagne. You have already, of course, suffered the ignominy of rejection, and now you are being celebrated, and soon you will be rejected some more, and most likely you’ll be celebrated again. This means you can’t take the rejection too seriously, but I’m afraid the converse of that is that you can’t entirely believe in the praise either. It’s wonderful, and deeply encouraging, and it will make your life better. But it will not cure your self-doubt, nor insulate you from despair. Nothing will.

But two things help, and I tell you this not because I’m possessed of any special knowledge but because, as a person who has essentially forgotten his good reviews and memorized the dreadful ones, I have some experience here. First, I believe the remedy for artistic bitterness is immersion in the present, in the joyful, continuing struggle of making something. You keep the challenges new, you solve the problems another way, you do what you don’t know how to do yet, and you’ll stay awake in your spirit, and it won’t matter quite as much what anyone thinks. Stanley Kunitz wrote, in his eighties, “I am not yet done with my changes,” and that might indeed be the right quote to nail somewhere above your desk.

Secondly, it helps to remember from time to time that we don’t quite know why we write. I feel certain it isn’t for recognition, or celebrity, which is fleeting and changing all the time, and if you’re out to make money, I would, despite the Foundation’s generous gift to you, consider another line of work. We write for something stranger, and harder to define, and I’d hazard that of anyone I know Joy Williams has said it best. .“Why does the writer write?” she asks. “The writer writes to serve — hopelessly he writes in the hope that he might serve — not himself and not others, but that great cold elemental grace that knows us.”

But this evening is not the time to worry about cold elemental grace, which, after all, will take care of itself. Tonight’s for congratulations and delight, but it’s also about providing these extraordinary writers with fuel for the future, of a spiritual sort: may these awards be sustenance for you, and help you to negotiate with your doubt, and make good use of it. May this award lend you aid and comfort while you move ahead in what I hope will be a long, happy work in service of what is real.