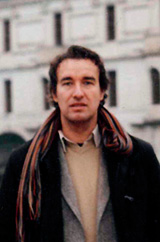 Can I name two? Anthony (Dance to the Music of Time) Powell's little-known third novel, Agents and Patients, is hilarious: rogue Freudian screenwriter-adventurers Chipchase and Maltravers try to take dim, well-intentioned, wealthy Blore-Smith of everything he's got. Somebody get this book back into print!

But only humor of your own moment can touch you to the core. The funniest book I've read from the past ten less-than-hilarious years–both deeply moving and literally-laugh-out-loud-in-public funny–is Ed Park's Personal Days, an office dystopia fizzing with formal and verbal energy.

Damion Searls is a translator from German, Norwegian, French, and Dutch and a writer in English. He has translated many of Europe's greatest writers, including Proust, Rilke, Robert Walser, Ingeborg Bachmann, Thomas Bernhard, Kurt Schwitters, Peter Handke, Jon Fosse, and Nescio, edited a new abridged edition of Thoreau's Journal, and produced a lost work of Melville's. His translation from the German of Hans Keilson's "Comedy in a Minor Key" was a finalist for the 2010 NBCC Award in Fiction. He will be hosting a special Proust event, in connection with his translation of "On Reading," at the Center for Fiction in NYC on Tuesday, September 20, and is teaching "Proust I" at the Center this fall on Wednesdays starting October 5.