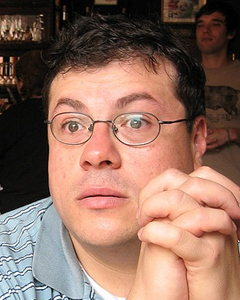 There are many, many comic novels I've enjoyed over the years, but if I had to pick a favorite, it would be John Fante's “Ask the Dust” (which also happens to be my favorite L.A. novel.) Arturo Bandini, the young struggling writer who can't seem to make his peace with the world, or catch a break, is pathetic, lonely, boastful, and idealistic — which is to say his plight is both hilarious and desperate.

In the same way Homer Simpson endears himself precisely because he's something of a jerk (and suffers the consequences of his being an idiot to our merriment), Bandini grows on you as you see through his posturing. He's his own worst enemy, but aren't we all?

Oscar Villalon is the managing editor at ZYZZYVA. The former book editor at the San Francisco Chronicle, his reviews and essays have appeared in VQR, Black Clock, the Believer, NPR.org, the Los Angeles Times, and the Rumpus.net, among other places. He and his family live in San Francisco.