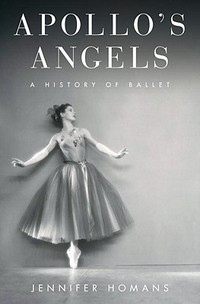 Each day leading up to the March 10 announcement of the 2010 NBCC award winners, Critical Mass highlights one of the thirty-one finalists (to read other entries in the series, click here). Today, NBCC board member Carolyn Kellogg discusses nonfiction finalist Jennifer Homans's Apollo's Angels: A History of Ballet (Random House).

The very first time I went to the ballet, I had no idea that Coppelia was among the oldest dances being still performed on stage. When I strapped on my first toe shoes, I didn’t know about the traditions of the courts of France and Russia, or how they influenced my next releve. Like so many middle-class American girls, I took ballet without any understanding of the art’s history or cultural place.

Todays young dancers will be in a different position.

That’s because of Jennifer Homans’s ambitious and fully articulated book, Apollo’s Angels, which tells the history of ballet from the sixteenth century to the present. Lauded as a best book of the year by the New York Times, this comprehensive book connects ballet to Classicism and the philosophical movements that followed, to political shifts and artistic priorities, presenting “the intellectual history of a deeply physical form.”

Homans describes how the French dominated the art for more than a century, creating rules and setting down the first illustrations of the five positions. As ballet became moved from court to theater, starring dancers shifted from male to female, from court members to those with the gift of grace and discipline.

The curve of history moves––to Denmark, and August Bournonville’s fluid style at the Royal Danish Ballet. To Russia, where the ballet became more physical, more emotional, and wildly popular. And eventually to America, which reconciled Classicism with those other traditions and––hello, Balanchine––added a twist.

“She has written the only truly definitive history of the most impossibly fantastic art form,” Toni Bentley wrote in the New York Times. Homans writes with authority and vigor. She has a matched and simultaneous dedication to two crafts: both the art of writing and ballet itself.

A dancer who trained with the School of American Ballet in New York and now is dance critic for The New Republic, Homans earned a PhD from New York University. “When I stopped dancing and I became a historian, I couldn’t quite get it off my mind, I couldn’t stop thinking about dance,” she said in an interview.

And what she is thinking, she says at both the open and close of Apollo’s Angels is “that ballet is dying.” But is she ready to let it? Apollo’s Angels seems nothing if not a jolt of life.

An excerpt from Apollo's Angels (via newyorktimes.com) can be accessed here. To read a profile of Jennifer Homans by Jennifer B. McDonald in the New York Times, click here.