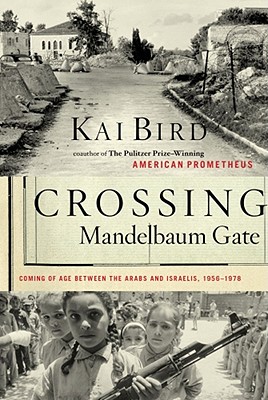 Each day leading up to the March 10 announcement of the 2010 NBCC award winners, Critical Mass highlights one of the thirty-one finalists (to read other entries in the series, click here). Today, NBCC board member Elizabeth Taylor discusses autobiography finalist Kai Bird's Crossing Mandelbaum Gate: Coming of Age Between the Arabs and Israelis, 1956–1978 (Scribner).

Kai Bird accompanied his parents to a reception at the American Colony Hotel, a Jerusalem landmark, when the conversation turned––as it always did, and does to this day––to the fraught situation in the Middle East. As the debate about the Arab-Israeli conflict continued, an heiress offered a million dollars to anyone who could solve the dispute. “Daddy,” five-year-old Bird told his father, “we have to win the prize.”

The prize has yet to be claimed, and that is the source of inspiration––and frustration––animating Bird’s memoir, Crossing Mandelbaum Gate.

From his childhood, Bird has been at the epicenter of this international conflict. As a little boy, he crossed through Mandelbaum Gate on his way to and from school every day, passing through the barbed wire fence and guards separating East and West Jerusalem. Bird, the son of an American Foreign Service officer, deftly uses his parents’ correspondence to evoke this richly textured complex world.

Bird witnessed the Suez and Six Day Wars, and the countries of the Middle East grew increasingly enmeshed in conflict. But Bird isn’t merely recounting public events and his responses to them. He meets and falls in love with a Jewish woman, the daughter of Holocaust survivors. This dimension enriches his story and his understanding of the Middle East.

Blending his own personal experience, a deep knowledge of history, and special empathic talent, Bird has written a memoir that enhances understanding of the today’s headlines.