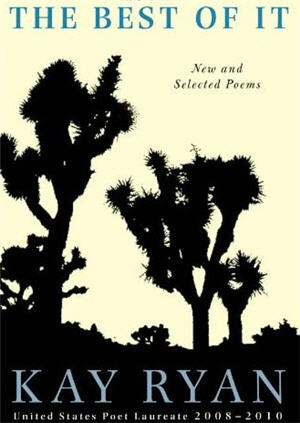 Each day leading up to the March 10 announcement of the 2010 NBCC award winners, Critical Mass highlights one of the thirty-one finalists (to read other entries in the series, click here). Today, NBCC board member John Reed discusses poetry finalist Kay Ryan's The Best of It: New and Selected Poems (Grove/Atlantic).

In The Best of It, Kay Ryan, with her clockwork precision, has selected 200-plus poems from four of her five published volumes, and included twenty-three new poems.

Ryan's welcoming intelligence is hallmark of a Poet Laureate; her trim lines and halts pull at readers with kinship and sagacity. Ryan's associations evidence the diversity of a true original: J.D. McClatchy cites Erik Satie miniatures, Joseph Cornell boxes, the intensity of Emily Dickenson, the buoyancy of Robert Frost, and a living philosophy in keeping with that of Marianne Moore and May Swenson; Publisher's Weekly cites Wallace Stevens, A.R. Ammons, William Bronk, and contemporary haiku “cut with a dash of Groucho Marks”; Sarah Fay, for the Paris Review, draws parallels to Philip Larkin and Ripley's Believe It or Not. While Ryan's terse humor and two sentence poems have led critics to associate her work with “compression,” Ryan rejects the category—and perhaps she has more rightly earned the honorific of “iconoclast.

Ryan's use of Spartan structure and internal rhyme (“recombinant” is Ryan's term) beg formal analysis, yet Ryan's emphasis is on the turning point—the peripeteia in a balance of emotion, logic, and aesthic.  Ryan floats her lines at even keel, we bob along as if in the bay, and then she tips the boat, not with a tidal wave, but a sudden lunge.

“Stations” [from the section New Poems]:

As the
veldt dries,
the great cats
range farther
to drink,
their paths
looping past
this or that
ex-oasis.
However long
the water's
been gone,
no places
are missed;
despite thirst,
every once-
deep pool
is rehearsed.
It's strange
the way our
route can't be
straightened;
how some
cruel faith
keeps the
stations.

The Best of It is a distillate of a distillation, part selected works, but more a refinement of its own. Poetic form, blues variation, DJ remix—the art of invention and reinvention is the art of living itself, or at least the better part of it:

However carved up
or pared down we get,
we keep on making
the best of it as though
it doesn’t matter that
our acre’s down to
a square foot. As
though our garden
could be one bean
and we’d rejoice if
it flourishes, as
though one bean
could nourish us.