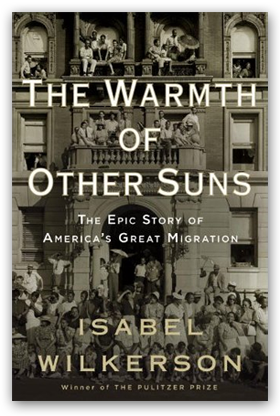 Each day leading up to the March 10 announcement of the 2010 NBCC award winners, Critical Mass highlights one of the thirty-one finalists (to read other entries in the series, click here). Today, NBCC board member Elizabeth Taylor discusses nonfiction finalist Isabel Wilkerson's The Warmth of Other Suns: The Epic Story of America's Great Migration (Random House).

Over the course of eighteen months, Isabel Wilkerson interviewed more than 1,200 people to find the perfect protagonists for her story about the movement of Black Americans who left the South between World War I and the 1970s. In her quest, she went to quilting bees, social clubs, libraries, Baptist churches, union pensioner meetings and funerals.

Finding three characters to represent the hearts and dreams of six million migrants seems impossible. In a high-wire feat of historical detection, she manages to do it: Ida Mae Brandon Gladney, a sharecropper’s wife who fled Mississippi with her family and headed to Chicago’s South Side after a white man’s turkeys disappeared and a cousin was accused, then beaten; George Swanson Starling, who got into trouble for agitating for citrus pickers’ rights in Florida and landed in Harlem; Louisiana physician Robert Foster, who served as an army surgeon, only to relocate to Los Angeles and find that he was not permitted to perform even the simplest of procedures he had done in the military.

In The Warmth of Other Suns, Wilkerson braids these stories together in a way that shows her to be direct descendant of J. Anthony Lukas’s Common Ground: A Turbulent Decade in the Lives of Three American Families. Lukas’s book is the gold standard, a work of history that blends individual experience in an epic sweep and breaks new ground.

Wilkerson has elegantly rescued a neglected chapter in American history in a way that captures the dreams––the dashed, frustrated, and fulfilled––of the Great Migration.

Isabel Wilkerson's website can be accessed here. Click here to listen to an interview with Wilkerson on NPR's Fresh Air.