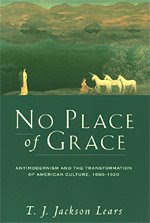 The following essay by NBCC member Tim Brown on “No Place of Grace: Antimodernism and the Transformation of American Culture, 1880-1920,” by T.J. Jackson Lears, a finalist for the 1981 NBCC nonfiction award, is part of the NBCC’s “In Retrospect” series on Critical Mass, in which critics and writers revisit NBCC award winners and finalists from previous years. It is written on the occasion of the 90th anniversary of “The Education of Henry Adams,” first published in September 1918, soon after the author’s death. “No Place of Grace” concludes with an extended meditation on Adams’s career and influence.

No Place of Grace, a finalist for the 1981 NBCC General Nonfiction Award, studies the “[ed]ucated strata of the Northern bourgeoisie,” the nation’s “journalists, academics, ministers, and literati.” The author’s aim is “to cast light on the hovering soul-sickness which emerges in the late nineteenth century and which has spread throughout the twentieth—the sense that modern life has grown dry and passionless, and that one must somehow try to regenerate a lost intensity of feeling.”

In the book’s foreword Jackson Lears introduces himself as “a Marxian critic of capitalist culture, whose heroes included Henry Adams and T.S. Eliot, and who actually had a good word or two for religion.” Besides Marx he cites as his influences Weber, Freud, and, especially, Gramsci, espouser of the “cultural hegemony” theory. The book’s reception depended upon where a critic stood on these social thinkers.

Walter Kendrick of the Village Voice unabashedly called No Place of Grace “a brilliant book.” Choice magazine raved it was deserving of “bookshelf space alongside Christopher Lasch’s The Culture of Narcissism.” American Historical Review hailed it as “a book that all scholars in the field will have to take into account.” Attesting to the book’s lasting influence, Mark J. Noonan, English professor at New York City College of Technology and executive editor of the Columbia Journal of American Studies, says the book even today “remains a landmark academic work … recovering an era that modernist sensibilities had long denigrated as meretricious, genteel, and dull.”

Interestingly, not one but two reviews appeared in the Times—John Leonard’s hippy-dippy October 1981 review in which you didn’t know if he liked the book until the final paragraph where he wrote, “Mr. Lears is to be congratulated for his splendid provocation,” and a total hatchet job in January 1982 by Johns Hopkins professor Kenneth S. Lynn, which accused Lears of practicing “anti-American studies.” Lynn placed Lears in the same company as Lasch—but not in a favorable way. His diatribe caused a minor shit storm of letters to the editor defending Lears’s book that dressed down Lynn as a “mean-spirited” conservative blowhard who seemingly demanded “some sort of loyalty oath [taken] by American cultural historians.”

As you would expect of a publication to which Lears regularly contributed, The Nation gave No Place of Grace its best review. Of the book Columbia professor Ann Douglas declared, “The scholarship here is flawless, trustworthy, extensive…. Lear’s thesis—that antimodern protest furthered, as much as it checked, what it ardently protested—is far-reaching, sound and provocative.”

I agree with Douglas that Lears’s commentary is closely argued, amply documented, and gracefully delivered. Happily, it is also free of lit-crit jargon. After laying out a few Gramscian concepts in the introduction, the author largely sticks to letting contemporaries speak in their own words as recorded in their essays, journals, letters, and speeches. I was largely persuaded by the book’s mound of evidence, and I believe its general conclusions about the American character are solid.

Yet, I would have found it interesting to read about how the lower classes took to the revised expectations and norms established by their bourgeois betters. Douglas also wished the book contained more discussion of this type. “After all,” she stated about the era’s populism, “the years between 1880 and 1920 were also peopled by men and women reading Marx, organizing unions, fighting poverty, [and] writing anti-capitalist tracts and literature.”

Noonan faults the book for the opposite reason: ignoring the positive legacy of Gilded Age business titans and financiers perched above Lears’s bourgeois subjects on the socioeconomic ladder. “Lears fails to adequately get at the heart of the truly great aesthetic and critical accomplishments of this period,” says Noonan. “The museums, public parks, libraries, railway stations, bridges, statuary, and beaux arts neoclassical architecture in New York City alone speak of a world far more complex and rich than the polemics of Lears and most other scholars of this era give credit for.”

To be fair to Lears, he purposefully elects to focus in No Place of Grace on the taste- and opinion-makers of the time, which, given the expansive ground he covers, is a plenty big job all by itself. Their self-reflections look an awful lot like what today’s Americans see when they look in the mirror. Consider this statement: “Late Victorians felt hemmed in by busyness, clutter, propriety; they were beset by religious anxieties, and by debilitating worries about financial insecurity.” How familiar do these words sound to someone living in today’s electronic age?—Tim Brown