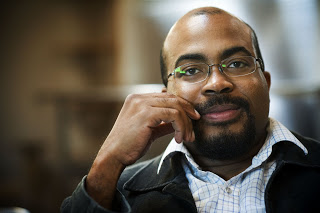 A native of Milledgeville, Georgia, Sean Hill has an M.F.A. from the University of Houston, where he was awarded the 2003 Michener Fellowship for poetry. He has also received fellowships from Cave Canem, the Bush Foundation, the MacDowell Colony, and the University of Wisconsin, and work-study scholarships to Bread Loaf Writers’ Conference. He recently received a Travel and Study Grant from the Jerome Foundation. He is currently a Stegner Fellow at Stanford University.

You were born in Milledgeville, and generations of the Wright family (the central figures in your book) also inhabit Milledgeville. It begs the question: does the Hill family tree (and perhaps history) parallel the startling one (you actually include a handy diagram) of the Wrights? Why the decision not to invent a name for the fictional Georgia town also? How are the two Milledgevilles different?

The Wright family tree doesn’t really parallel the Hill family tree very much; however, I did use some details of my family’s history to give texture to the fictional Wrights. Maybe the main parallel is in their longevity. Just a couple of years ago I discovered I’m a direct descendent of a Hill who was born in or around Milledgeville in 1812. That’s as far back as I know. Similarly, the Wright family tree goes back to 1807.

I started this manuscript after I wrote the “Grandmother Poems.” I wanted to know more about my family and that turned into wanting to know more about their lives in Milledgeville. And my research led me into simply wanting to know more about Black people in Milledgeville and not necessarily in opposition to white folks. Writing about a fictional character, Silas Wright, and building a family around him gave me a freedom of exploration that I feel I might not have had if I’d needed to adhere too closely to the history of my family. I felt the freedoms that fictionalizing grants would not deny other truths, the truths of history and place and people.

I intentionally chose to make Silas a generation older than my grandparents so that I wouldn’t be writing about them and so that I would be pushed farther back into Milledgeville history—that particular place, the Antebellum Capital of Georgia with its history of slavery, the home of Flannery O’Connor, etc. Perhaps because of my interest in these particulars, it didn’t occur to me to make up a place or fictionalize Milledgeville by making up a name for it.

The poem “Nigger Street 1937” was written after talking to older members of my family. The Black business district on McIntosh Street was commonly known as Nigger Street. It doesn’t exist anymore; it’s now municipal buildings and a plaza with a marker commemorating the Black business district. This was the first poem I wrote for what I hoped would become a manuscript. Several years after writing that poem I found the watercolor of McIntosh Street that’s on the cover of Blood Ties & Brown Liquor. When I saw it hanging on the wall of a funeral home in Milledgeville, I felt like I’d blindly written an ekphrastic poem. It was painted by Frank Stanley Herring, a Pennsylvania native who moved to Milledgeville sometime around 1930. The painting corroborated my vision and my relatives’ memories. I’m very grateful that Herring painted this scene of that particular place.

My Milledgeville is shaped and framed by my imagination engaging historical materials; I set out to write poems that focused on Black folks in Milledgeville. I think there are myriad other Milledgevilles. In talking to people in the community and reading books and old newspapers while doing research for this manuscript, I think I glimpsed some of those Milledgevilles.

Forms are important in this collection. You employ the pantoum, rhyming and free verse sonnets, and a few glorious villanelles, like the pair “Insurance Man 1946” and “Nightmare 1946” in which you inverse the end-words of the first and third repeating lines in the second poem. But there are also poems here that gesture toward the church song and the blues, and voices that speak with a distinct Southern tone. Language is indeed a complex, multi-layered landscape in Blood Ties & Brown Liquor. I’m reminded of the lines in “Southampton County, Virginia Aubade 1831”: “The mockingbird greets the morning/ with many tongues.” What were some of the challenges in capturing these tongues and their contexts as they changed over the large span of time covered in this book?

Thank you for the compliment to my villanelles. And yes, I was exploring received forms about the time I started writing these poems. It started with the “Grandmother Poems.” I was interested in seeing what would happen to the voice and the received forms when they were wed—how the vernacular and the formal constraints affected each other.

I tried to pay attention not only to the things people said—relatives talking on the porch, preachers in pulpits, and folks on the street—but how they said them. I wanted to avoid using phonetic spellings and apostrophes to provide a visual representation of dialect on the page. I had to trust my ear, allow the characters to speak, staying out of their way, and hope for the best. There was always a consideration of would this speaker say this and if so how. Sometimes it was a question of syntax and vocabulary. “Candlefly Redux,” for example, is a poem I wrote to momentarily get away from the voices in the book.

This book is unafraid to engage the racial tensions and conflicts of the South’s far and recent past, and how the climate of racism guides the lives of all people, with particular hardship on those who struggle to persevere it. Slavery, lynching, segregation—these atrocities continue to rattle even as times change, seemingly for the better. “The house I was born in still stands,” declares the speaker of the final poem in the book. It’s an ambiguous statement, or rather, a double-edged one. What awaits the Wright family in the near-future?

Yes, that is a double-edged statement. Coming up through grade school I’d learned about slavery, segregation, the 1954 Brown v. Board of Education decision, and the Civil Rights Movement, but it wasn’t until 1991 when I was a senior in high school that I learned that the schools in Milledgeville weren’t integrated until the 1970-1971 school year. While working on the school newspaper one of my assignments was to write an article about the twentieth anniversary of school integration in Milledgeville. It hadn’t occurred to me how recent that history was, but it explained a lot of the underlying and surface tensions I experienced. It gave me a sense of the differences between my world and my parents’ world, and let me see the ways history can linger in places.

I’m not finished with the Wrights or with Silas and his children and their children. But now I’m working on poems about other figures from Milledgeville’s history. The place still fascinates me—its past and its present.