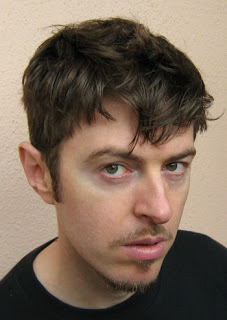 The End of the World Book, University of Wisconsin Press, 2008.

Alistair McCartney teaches creative writing at Antioch University in Los Angeles. His work is widely represented in various literary journals and anthologies of fiction and nonfiction, including Wonderlands: Good Gay Travel Writing. Born in Australia, he currently lives in LA. He is presently working on the next two novels in his trilogy, The Death Book: a Comedy, and The Encyclopedia of Boys.

The End of the World Book defies easy categorization-this “alphabetical guide to the apocalypse” reads like a collection of prose poems or an inventory of every subject made fascinating and worth reflecting upon. This is also a book that blurs the lines between fiction, nonfiction and memoir as it gathers facts and recollections woven into narratives that may or may not be true. Why this complexity of structure? And what are you expecting the reader to take away after experiencing this book?

Well, like most elements in my writing, the structure developed very organically. As a writer I had never felt comfortable in inhabiting one genre, whether it is complying with the truth constraints of memoir, or the at times equally rigid demands of fiction, those imperatives of plot and character and creating one seamless, miniaturized world. Although of course this is a purely personal aesthetic choice, I do feel that writing at the beginning of a new century, the question of representation is in flux and up for grabs. That is, how do we choose to represent this world? Do the categories of fiction and nonfiction as we used them in the 20th century still apply to the historical and aesthetic conditions of the 21st century? Of course I’m not the first writer to say it, but perhaps the complexity of a new century demands a complex literary mirror. However, I would add that what I’m doing is actually quite simple: describing and categorizing the contents of my unconscious in a manner after Rimbaud, both systematic and deranged.

As for what do I expect the reader to take away with them, although I could never predict a reader’s response, to paraphrase Flaubert, one hope I do have is that my book will set the reader dreaming, will leave them with that disquieting feeling a dreamer experiences when waking up in the morning.

The tone of this book is interesting because even as it asks the reader directly “Do you fully understand that someday you are going to die?” in such entries as “Question Marks,” there are plenty of moments of humor, especially with the pop culture entries such as “Hip-Hop” and “Justin Timberlake.” You seem to address different layers of “endings”-the end of life, the end of days, but also, in this age of information overload, the end of trends, the end of public interest and the fickle relationships society has with media and technology: always the search for the new and the better. Is this part of a critique of modern life? (“Death will be more like myspace.”) Are today’s citizens shaped and defined by these immediate attachments to things of fleeting and ephemeral value? Or is this what makes humans so unique and precious?

I would say my novel is simultaneously a critique of the banality of culture—specifically pop, political and technological culture—and an anarchic immersion in it.  Hence, as you point out, the shifting tone of this book, between the deeply frivolous and the deadly serious, the sincere and the ironic, the romantic and the derisive.  Within that sliding surface, the main critique is perhaps of the death of the imagination at this point in time in culture here in the U.S., the loss of the unique, a railing against our culture of repetition. I mean it when I write that people will look back on this decade as one in which there was no hope of doing anything original, and that it will be a decade best forgotten.

So TEOTWB is to a large degree satirical, which I believe is unavoidable in an age like ours, but as I also write in my entry on “Satire”, “there are spaces that satire cannot reach.”—namely those precious aspects of humans you refer to above. This is where the critical voice in my book constantly breaks down—my eyebrow is no longer arched—and this is what the narrative persistently addresses: that age-old literary obsession with the strangeness of being, and the fact of impermanence.

The apocalyptic text has received plenty of attention in the post-911, global warming-obsessed world, especially in movies, but also in books such as Cormac McCarthy’s The Road: everywhere a reminder of the damage humanity has done to the earth and how it has secured our downfall. And though these texts (including the Book of Revelations itself) declare that casualties will be many, they also point out that there will be survivors-those left behind to tell the tale. The survivor in The End of the World Book is a gay narrator who navigates the broken world with wit, humor and plenty of street smarts. Sexuality, which has not been addressed in other apocalyptic narratives, is an important layer of this book. Can you discuss how these two elements (queerness and the Apocalypse) came together for you while you were writing this book?

As with the structure, the queerness of this book and its focus on apocalypse developed very instinctively and naturally-perhaps it’s my Catholic upbringing, but there’s just something about the two subjects that go hand in hand. I also think that in the history of gay male literary and transgressive fiction—which is one of the traditions I’m indebted to, though not the only one-there’s a long tradition of doing two things: either unveiling the suppressed erotics of a situation (Burroughs, Genet) or injecting sharp wit into the most unlikely spaces (Wilde, McCourt).  So in this sense, I am simply operating within that tradition, bringing out the dark camp of Revelations, bringing to light the fact that the end of the world both horrifies and arouses us.

I would say the other major difference between my literary unraveling of the apocalypse and those you refer to above is that whereas most apocalyptic narratives happen in the future, my apocalypse happens simultaneously in the future, the present and the past.  Hence the threads throughout the book of past plagues (The Black Death, AIDS), historical genocides (The Holocaust, Pol Pot,) and present day invocations (Suicide Bombers). I state quite clearly that the end of the world has already happened, and it has, countless times, and it continues to happen, on different scales.