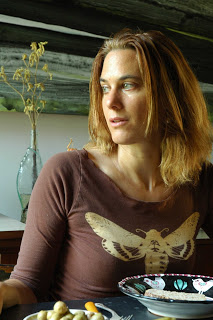 NBCC member Kate Christensen, novelist and critic, on what led up to her recent PEN/Faulkner award for “The Great Man.” (See notes on judging this year’s PEN/Faulker by NBCC Balakian award winner Molly Giles here.)

Writing novels is an exciting and challenging and somewhat surreal job whose cyclical nature causes an enforced manic-depression. After months or years of interior, self-doubting, tunnel-visioned, antisocial, obsessive labor, a kind of low-level bottom-feeding life in a parallel world of your own invention, comes the bright light of publication, if you’re lucky. The world seizes your book, if you’re lucky, and sometimes ignores it completely or turns it into something you might not have intended it to be. You trundle along in its wake, trying to be articulate in interviews. It’s all very exhilarating and daunting.

Here’s my experience, in a nutshell:

My first book, “In the Drink,” which I had intended as a comic literary novel, landed squarely in the first wave of American “chick lit” books, where it sold about 20 times more copies than it likely would have without Bridget Jones, was dismissed as fluff by the literary world, and eventually vanished.

My second novel, “Jeremy Thrane,” which I had thought was a little dark but acceptably entertaining and reader-friendly, came out a couple of weeks before September 11th , and immediately vanished.

My third novel, “The Epicure’s Lament,” which I wrote in a white heat of post-9/11 rage and sadness, was reviewed wonderfully but sold, to put it mildly, very modestly. After I finished it, I went into a deep slump of writer’s block that lasted for more than a year.

To buck myself up, I decided I needed to write something in the third person, as a bracing technical challenge. For me, writing in the first person is a zenlike floating along, breathing, organic, letting another persona take over my brain and keyboard, whereas third person is like wrestling with a big, greasy, mean, cheating bear.

I slaved and agonized over “The Great Man.” I loved my characters but hated having to be the authority. In fact, at first I tried to turn the narration over to them. I democratically went into all their heads, gave every one of them as complete a voice and role as I usually reserve for my first-person narrator. Consequently, the first draft was a great mess I spent six months shaping and focusing and beating into what I hoped was a more coherent second draft. My editor and agent assured me that they loved it, but I was skeptical; when it was published, I expected it to be torn to shreds in reviews (should I be admitting this?). I had only the slightest hopes for its fate.

And so learning a few weeks ago that “The Great Man” had won the PEN/Faulkner award seemed perfectly in keeping with the ridiculous trajectory of the writing life. It’s an insanely optimistic endeavor, to keep throwing things out there, hoping for the best. It’s amazing when the best actually happens. I’ve always identified with underdogs and losers and malcontents; being a winner has caused a bit of a psychic seismic shift. I’ll probably never lose my innate sense of being an outsider, but it sure is nice to win a prize.—Kate Christensen