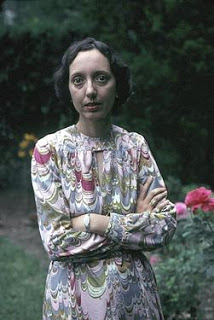 This week marks the 34th annual National Book Critics Circle Awards. A reading from the 2007 finalist will happen this Wednesday at the New School Tishman Auditorium, located at 66 West 12th Street, at 6PM, while the awards are held the following night, Thursday, at 6PM. Both are free and open to the public.

I originally thought this was the first time we’ve had an author (Joyce Carol Oates) to be named a finalist in two categories in the same year. But that actually happened back in 1988, when John Hollander was nominated in poetry (for Harp Lake) and criticism (for Melodious Guile: Fictive Pattern in Poetic Language).

Julia Alvarez, Once Upon a Quniceanera (Criticism, 2007) and In The Time of the Butterflies (Fiction, 2004)

Susan Faludi, for The Terror Dream (Criticism, 2007) and Backlash: The Undeclared War on Women (Nonfiction, 1991)

Frances Fitzgerald, for America Revised (Criticism, 1979) and Way Out There in the Blue (Nonfiction, 2000)

Paul Hendrickson, for Looking for the Light (Biography, 1992) and Sons of Mississippi (Nonfiction, 2003)

Alice Kaplan, for French Lessons (Biography, 1993) and The Collaborator (Nonfiction, 2000)

James Merrill, for Scripts for the Pageant (Poetry 1988)—and several other volumes over the years—and A Different Person (Biography, 1993)

Vladmir Nabakov, for Details of a Sunset (Fiction, 1976) and Lectures on Literature (Criticism, 1980)

Cynthia Ozick, for Bloodsheed and Three Novellas (Fiction, 1976) and one other fiction, and Art and Ardor (Criticism, 1983), along with several other volumes of criticism

David Remnick, for Lenin’s Tomb: The Last Days of the Soviet Empire (Nonfiction, 1993) and King of the World: Muhammad Ali and the Rise of an American Hero (Biography, 1998)

Philip Roth, for The Professor of Desire (Fiction, 1977) (and five other fiction titles) and Patrimony (Biography, 1991)

John Updike, for The Coup (Fiction, 1978), and three other fiction titles, and Hugging the Shore (Criticism, 1983) and two other criticism titles

Lawrence Weschler, for Everything that Rises (Criticism, 2006) and Mr Wilson’s Cabinet of Wonders (Nonfiction, 1995)