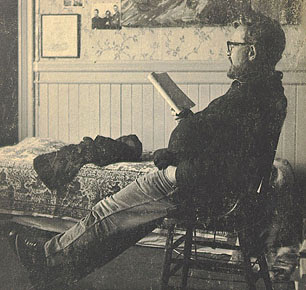 It would be silly to act as if the NBCC’s Good Reads List encapsulated everyone’s taste. To do that we’d need a list nearly a thousand books long. But in the interest of showing the breadth of voting in our winter list, here are are the poetry titles which received multiple votes, from “The Collected Poems” of Philip Whalen (the author pictured left, reading) to Allen Grossman’s Descartes’ Loneliness,” to Matthea Harvey’s “Modern Life,” which was recently also named a finalist for our 2007 book prize for poetry. The titles are shown alphabetically within the order of highest votes received (i.e., the first seven books tied with the same vote totals).