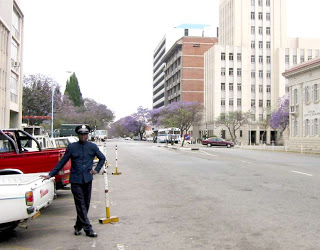 The following essay on Norman Rush’s “Mating” by Swarthmore College history professor Tim Burke is the second of three posts in the In Retrospect series which will look back at Rush’s 1991 ficion finalist, Mating, a novel that continues to strike readers today as a profound meditation on love and what it feels like to be an expatriate in Botswana.

WHAT difference does it make to live somewhere for a time? It’s a pretty difficult matter to pin down. There are a lot of people with a vested interest who insist that it makes all the difference. Usually that’s the people who’ve lived in the world as well as the home, and who gain some precious (and often quite material) advantage by insisting that they know the world and its travails better than you, the mere reader, the viewer, the armchair general, the person who has never been there.

But it does make a difference. There is a fellowship of people who have been there, united by their sensory, visceral, embodied knowledge of a specific place and time. I have been working on a book about several Zimbabwean chiefs. One of them walked from a courtroom where he was on trial back to his own village. It is one thing to read that in an archive and another to realize, to see, to feel that this was a walk up a side of one steep mountain and down the side of another. It makes a difference for a historian to go to and be in places that are not now what they once were, to fallen ruins or fire-made meadows, to cities that were once towns, or towns that were once cities.

I don’t think you should gain much concrete authority because of having been there, any more than I am inclined to straightforwardly trust the authority that some people claim from being a particular kind of person. You can learn intensely valuable and important things about a place from maps and books and pictures that a resident of that place may never learn in a lifetime, just as you can learn about and understand from the outside what it is like to be another kind of person, to have lived another kind of life.

Still, as a teacher and a scholar, I want to make a point of remaining humble about experience, aware of the feelings and sights and smells that are just outside the frame of the document, the manuscript, the picture, to be conscious of the discoveries that come from unmannered and improvised life in the everyday against the formal ordering of knowledge. In a lot of my courses, I try to find books or materials that can give my students a feeling for a place and time. Not so much so they can feel that way themselves, but as a call to humility.

Teaching Norman Rush’s Mating does the trick nicely. Rush’s work (both in Mating and his short-story collection Whites) is a Proustian madeleine for me, fictions which transport me to a particular time of my own life, when I was living in Zimbabwe in 1990-91. When it comes to the daily world and mindset of white foreigners living in southern Africa in the last thirty years, Rush feels to me so very right, as if he had been peering in at me and the other Americans and Europeans I knew well.

More importantly, Rush’s fiction is sharply attuned to the psychological and economic world of expatriates in general. Literary critics have devoted a great deal of attention to the fiction of exile and its yearning representations of a home denied. Migration is something richly imagined when it involves desperate or dramatic choices, people in motion across the world fleeing disaster, loss, poverty, war, cramped horizons, lost dreams. Nor are we short on travellers’ tales, the stories and memories of people who are just passing through. But expatriates, people who reside for a long time, sometimes a lifetime, without planning to settle, native foreigners: there are not so many stories about their lives. There are certainly none better than Rush’s work.

There are expatriates who love Africa, just as there were and are white settlers who loved Africa. Sometimes that love is the sentimental but morally dimwitted affection of a Karen Blixen, sometimes it is the powerfully unsentimental x-ray love of an Alexandra Fuller. There are expatriates who understand the African world they occupy deeply and well, and there are those who blunderingly overlook the basic facts of daily life. I remember one fellow researcher who wondered why the municipal authorities in Harare were burning down maize being grown in vacant lots: “it must be growing wild, like a weed”, she said. It was impossible for her to imagine that the bureaucrats might be so malicious in their pursuit of petty authority over the land of the city as to assert that authority by burning down crops grown by the urban poor. (Of course, she also didn’t seem to know that maize can’t grow wild.)  I remember another researcher, when I was again living in Zimbabwe later in the 1990s, who happily asserted that the Zimbabwean government would eventually figure out how to handle land distribution issues for the benefit of all its people. This well after the country’s precipitious economic collapse had begun. There are expatriates who go to local shebeens and those who more or less continuously live in five-star hotel bars, seeking to stay comfortably among busy men in suits. There are the shabby receptions stocked full of shell-shocked Peace Corps volunteers fleeing to the local metropolis from the doldrums of their ten-month slump and the swankier receptions with perkily ignorant USAID and USIA middle managers who barely register anything about the world around them. There are pretentious intellectuals like the narrator of Mating (nothing like my 27-year old researcher self! really!) and the cheerful unreflective technocrats there to find oil, improve mining, teach dentistry or devise a better shampoo for African customers. There are the Norwegian Ph.Ds in their Land Rovers doing mysterious development work and the sharp-eyed CIA agent from Texas waiting for his call to an assignment that actually matters. Rush has a great sense for the totality of this world: reading his fiction is like a panoramic sketch of the expatriate universe. Some of its figures are blurrily imaged at the edges, but you’re sure he got a good look at it all.

He also has a sense for what makes it ache. A white expatriate in southern Africa is not likely to live the story of A Year in Provence, a story of happy, simple cosmopolitan yearnings to be part of a simpler rural world only to find that in the end that the country folk are not Us (but are yet amusing and pleasant and admirable). Even a fairly thickheaded American or European resident understands that buying up a farm or living a simple rural life in Africa is something with a troubled history. Buying a beach house in the Western Cape or renting an apartment in Maputo, sure.

Like some of Rush’s characters, I found myself continually surprised at how irrelevant most local people found my whiteness. I went armed with a long and ready series of apologies for the entirety of my existence and for my guilty racial connection to various crimes of history, only to find that people more or less couldn’t care less. Or found what I was saying about history to be sweetly incomprehensible, as with the family behind my flat that just wanted me to agree to hire them to do domestic work like everyone else in the building did. Or they thought that yes, white foreigners were both assholes and oppressors but they weren’t going to say that as long as there was some chance they could get something out of me.

On the other hand, like many of Rush’s characters, I discovered the subtle psychological burden of always being visible, always being a spectacle. It’s not like being the only American living in a small farmhouse in Tuscany: you’re a familiar kind of character there, expected to act and be and do from a known repertoire. You might even eventually be able to disappear in a crowd. As a white American in southern Africa, once you’re away from an urban downtown, you’re going to have a crowd of kids flapping behind you like birds happily yelling, “Hello! Hello! Hello!”. If you pick your nose, a hundred people will be watching and commenting in whispers.

This is interesting at first. Eventually it gets a bit wearisome to watch heads snap around at the paunchy white guy puffing by on his 75-lb. Chinese bicycle. The paranoia, depression and disorientation of many of Rush’s characters has something to do with a resulting combination of disconnection and anxiety, a sense of being both important and impotent, never anonymous but also never really understood by anyone but other expatriates. (People who you might never hang around with were you at home, but here, who become both island and fortress against the surrounds.) Carl, one of Rush’s characters in Whites, goes to a local African healer partly to try and become a part of the world around him. Nelson Denoon, one of the protagonists of Mating, tries to become both patriarch and savior to a Botswanan utopia, to both blend in and remain an indispensable outsider. This is a warm and fuzzy kind of story in Provence or Scotland or Umbria, but it rarely seems so in southern Africa. Any white American who thinks that black Americans should just shrug off everyday sorts of racism like having white people edge away from you in an elevator should try walking in those shoes for a mile or two. Knowing that most people are looking at you all the time—and not knowing exactly what they’re really thinking about you when they do so—wears you down in all sorts of ways.

These are some of the feelings from being there that I recover from Rush’s fiction, and some of what I hope his work will communicate to my students. However, every time I’ve taught Mating, my classes tend to go straight to another subject, namely, whether this particular male novelist successfully inhabits the inner voice and life of his unnamed female narrator. Most of the women in my classes have tended to say no, but that’s partly because they find her so very irritating, something that I think she’s meant to be. Most of the male students find her a credible woman, or much more sensibly, lay low, look warily about them, and express no opinion on this subject. As a commentary upon a type of person whom I (like Rush) tend to imagine an unflattering interior character for, I find the narrator familiar and credible, a lengthier version of the acidic sketches of Whites. As a serious attempt by one kind of person to inhabit the inner spaces of another kind of person? Let’s say I’m convinced by the female skeptics. In some ways, another expatriate writing about Botswana does a better job in that respect, albeit in a more lightweight kind of fiction, namely, Alexander McCall Smith and his character Precious Ramotswe.

If that’s a strike against the book, it is a small and forgiveable one against the capture of memory for myself, and for my students, I hope, a brief introduction to the humility that living in a place far away brings to our ways of knowing.

—Timothy Burke is an associate professor in the Department of History at Swarthmore College, located just outside of Philadelphia. He is the author of Lifebuoy Men, Lux Women: Commodification, Consumption and Cleanliness in Modern Zimbabwe and the co-author of Saturday Morning Fever: Growing Up With Cartoon Culture. He is presently struggling to finish a book on individual experience and agency in 20th Century Zimbabwe.